In the early hours of Wednesday morning (AEDT), the Brooklyn Nets made their statement: Kyrie Irving, one of the world’s best basketball players, will not be part of their quest for an NBA championship until he’s vaccinated against COVID-19.

The saga, which dragged on through the off-season and preseason, came to a head through a statement released by the Nets and general manager Sean Marks. 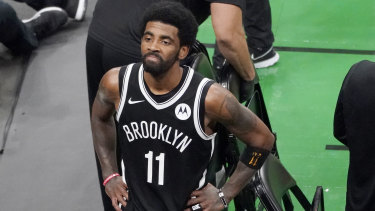 The Nets said Kyrie Irving (pictured) had “made a personal choice, and we respect his individual right to choose”.Credit:AP

So, the Nets made a stand – and in doing so, made it clear that Irving’s decision led to it.

“Given the evolving nature of the situation, and after thorough deliberation, we have decided Kyrie Irving will not play or practice with the team until he is eligible to be a full participant,” Marks, the New Zealand-born, 2005 NBA championship-winner, said in the statement.

“Kyrie has made a personal choice, and we respect his individual right to choose”.

In a hastily convened press conference soon after the Nets’ decision was announced, Marks said: “We’re not looking for partners that are going to be part-time”.

It was initially thought that Irving could continue to travel, train, and play with the Nets in cities that have no such vaccine mandate.

Marks said he wouldn’t “address the hypotheticals of what may happen in the future” when it comes to the possibilities of trading Irving – the vice-president of the NBA Players Association – but added he hoped to see him back with the team “under a different set of circumstances”.

“All our players were made aware this was the trajectory we’re going down,” Marks said of the decision, made in conjunction with Joe Tsai, the billionaire owner of the franchise.

“Our hope is that we can somewhat put this to rest and move on with the season.

“I don’t think we wanted to be focused entirely on an individual who’s not with the team right now.” 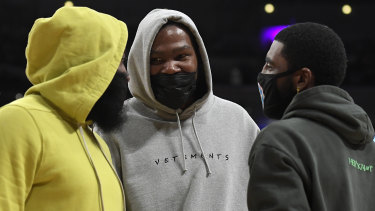 The Nets enter the new season as the $3.50 favourite (with Sportsbet) to win their first NBA title, and their first title overall since their ABA championships of 1974 and 1976.

They lost to the eventual champion Milwaukee Bucks in a deciding game seven of the eastern conference semi-finals last season after a campaign riddled by injuries to key players – including the mercurial Irving.

The seven-time All-Star point guard won a championship with LeBron James and the Cleveland Cavaliers in 2016 after nailing one of the biggest shots in playoff history.

By not being available for the Nets until he’s vaccinated, he will lose his home game salary.

The team can’t dock his salary for games missed away from New York because it’s their decision for him not to play.

According to Bobby Marks, a renowned NBA salary cap expert who formerly worked in the Nets’ front office, Irving stands to lose $US381,181 ($517,944) for every home game he misses – not including the playoffs.

Irving, 29, is eligible for a four-year, $US254 million contract extension for the Nets.

Marks didn’t articulate what Irving’s star teammates – such as Kevin Durant and James Harden – thought of the Nets’ decision, but added: “All parties that needed to be consulted on this were.

“Again, this is a choice Kyrie had and he was well aware of that. This is where we stand.

“Will there be pushback from Kyrie and his camp? I’m sure this won’t be something they like.

“The goal is still to be the last team standing. At the end of the day, the organisation’s focus needs to be the players who’re involved here and participating fully.”

Marks said all the Nets could do was abide by the vaccine mandates and trust the science involved.

“This pandemic has affected a lot of people far worse than it’s affected the Brooklyn Nets,” he added.

“We play a game of basketball.”

Boomers Olympic hero Patty Mills signed with the Nets in the off-season.