LeBron James said he “does not live his life thinking about legacy” after leading the Los Angeles Lakers to their 17th NBA championship.

James went to Miami and became a champion. He went back to Cleveland and won another title. He went to Los Angeles and now the Lakers are back atop the basketball world.

LeBron James, love him or hate him, is in his own category now. He has led three franchises to NBA titles, something nobody has ever done. His legacy was complete long before Sunday night, when the Los Angeles Lakers became NBA champions for the 17th time by beating the Miami Heat and winning the title to cap a season like none other, in a bubble like none other.

But that legacy is just a bit shinier now.

“I guess, as Frank Sinatra would say, I did it my way,” James said earlier in these playoffs.

That is not up for debate. 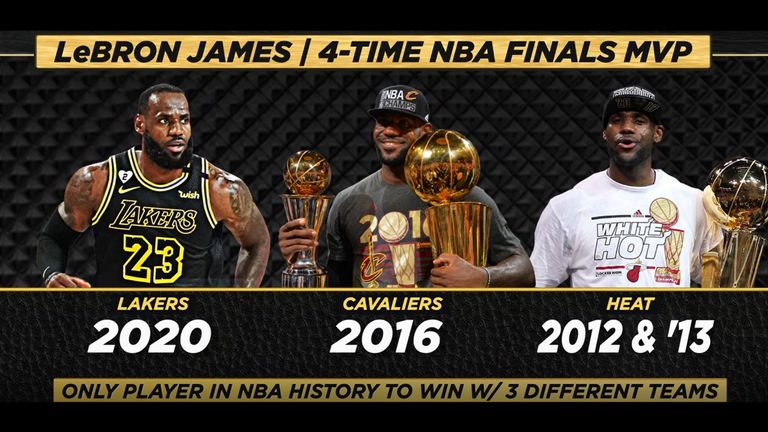 He has four titles. He is a four-time NBA Finals MVP, the second player to win that many. He has done it all with the NBA’s biggest target on his back, with every action and every word scrutinised and often criticised.

James has become the epitome of the independent superstar athlete, something many try to be but few even have a chance of pulling off. He does whatever he wants, whenever he wants, however he wants and makes it work.

Bill Russell will forever have more rings and Michael Jordan will forever be the choice of many as the NBA’s greatest player. And that’s OK with James, who has forged his own path.

“The game of basketball will pass me by,” James said as the title loomed. “There will be a new group of young kids and vets and rookies throughout the course of this game. So, I cant worry about that as far as on the floor. How I move, how I walk, what I preach, what I talk about, how I inspire the next generation is what matters to me the most.”

He has never forgotten that he was once a broke kid from Akron, Ohio. If he is not a billionaire yet, he is trending that way. He is on a Wheaties box now, saying its unveiling last week was one of the “best moments of my life”. He founded a school and stays involved with matters there. He has actively trying to get more people, particularly black people, to vote than ever before.

And if all that wasn’t enough, he delivered a championship to a Lakers franchise that went 10 years without one and did so in a year when they needed it most, letting them cry tears of joy after all the tears of anguish that followed the death of Kobe Bryant in a helicopter crash in January.

If he is slowing down, he is not showing it; he had 32 points in his first playoff game 14 years ago, he exceeded that six times in this postseason run.

“He has shown why he is the player that he is, why he has had the career and the legacy that he is continually building,” Miami’s Jimmy Butler said.

James is 4,148 points behind Kareem Abdul-Jabbar, the NBA’s all-time leader in the regular-season scoring. He he will have to play at least two more full seasons to reach Abdul-Jabbar’s mark.

He was selected on the All-NBA team for the 16th time this season, a record. He started his 16th consecutive All-Star Game this season, yet another record. More fans picked him as MVP this season than Giannis Antetokounmpo, who won the award.

What he has done, on and off the floor, is how legends are defined.

Get NBA news on your phone

Want the latest NBA news, features and highlights on your phone? Find out more

“I just think it is a true testament to his greatness to be able to sustain this type of success year in, year out,” Miami coach Erik Spoelstra said. “Different uniforms. New players and new teams going after him. It is a real testament to that commitment. He has seen everything. At this point in his career, it is just about winning.”

Others have won more. But nobody in the NBA has won the way James has. His way.

Want to watch even more of the NBA and WNBA but don’t have Sky Sports? Get the Sky Sports Action and Arena pack, click here.