Steph Curry won his second 3-Point Contest in thrilling fashion at the 70th NBA All-Star Game in Atlanta on Sunday night, whilst Domantas Sabonis eased to overall victory in the Skills Challenge.

All-Star Sunday got underway with the Skills Challenge, as two Euro big men in the form of Nikola Vucevic and Domantas Sabonis contested the final. It was nail-bitingly close, with Sabonis coming out on top by sinking his three first after he had knocked out Julius Randle and Luka Doncic in the preceding rounds.

Nikola Vucevic had defeated Robert Covington and Chris Paul to reach the final, after the latter had surprisingly missed a layup.

Then it was time for the 3-Point Contest, featuring a stacked field including Steph Curry, Mike Conley, Donovan Mitchell, Jayson Tatum, Jaylen Brown, and Zach LaVine. 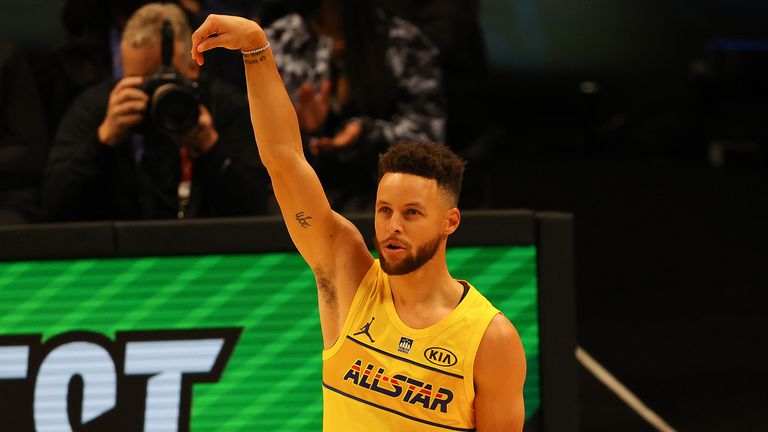 Brown was up first, and got off to a bit of a rocky start after kicking his legs against the ball rack halfway through his run. He finished with 17 points out of a possible 40, which wasn’t going to be enough to make the final in a field as strong as this.

Next, it was LaVine, who scored 22, before Brown’s Boston Celtics teammate Tatum showed him how it was done to the tune of 25 points, enough to see him through to the eventual final.

Following was the Utah Jazz pair, as Mitchell tied LaVine with 22. Conley, at his very first All-Star Game, caught fire to put up 28 points and seal his place in the final round before Curry even took to the court.

Good job he did, as Curry swished shot after shot to score a demoralising 31 points on his first attempt.

The net doesn't move on half of these 😳 pic.twitter.com/4YOfrzNPL7

That meant the final would be contested between Tatum, Conley, and Curry.

Tatum went first as he had the lowest score but couldn’t replicate the rhythm he found in the first round and scored a lowly 17, effectively taking him out of contention.

Conley, battling to become the first left-handed player to win the contest, carried straight on from where he left, nailing his money ball rack from the centre of the floor to total 27 points.

However, Steph had the final say and despite missing his first four shouts, shot the lights out through the second half of his round to snatch the win with his final ball.

Curry had previously won the 3-Point Contest in 2015 and afterward dedicated the trophy to his teammate Klay Thompson, who is currently out for the season with an ACL tear. Thompson also won the competition in 2016, beating Curry in the final round.

"The Splash Bros are back, this one goes out to Klay Thompson"

There was only one person Steph was dedicating his win to 💛 pic.twitter.com/tY0TRFOOFz