The NBL season is scheduled to belatedly tip-off on Friday, and we look at the 10 burning questions about the season to come.

The NBL may not have had a big man entering his prime like Landale is since Chris Anstey returned from Europe, or Simon Dwight was turning down NBA offers.

Landale comes home fresh and motivated with the NBA and Olympics both within his reach, while United's team is already stacked with the established core of Chris Goulding, Mitch McCarron and David Barlow, with recent Duke forward Jack White ready to surprise. 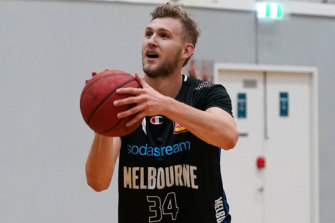 If this were a regular campaign, United would be runaway favourites, but with a disrupted and possibly disjointed season ahead, who knows how much talent will be worth? United will hope it is what pushes them to the title.

Will Brian Goorjian drag the Hawks from the bottom to the top?

This is real. Goorjian was away for 11 years but he has come back to the Hawks and recruited a roster with size, athleticism, versatility and scoring prowess.

Golden State draftee Justinian Jessup looks an MVP candidate, Deng Adel could be a match-winner and the likes of Emmett Naar, Tyler Harvey and veteran Cameron Bairstow all seem primed. 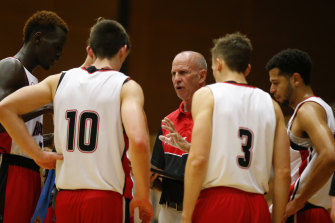 Back with the Hawks: Brian Goorjian.Credit:Getty Images

But this is a Hawks side which has seen little success in recent years and faces the potential of starting the year on the road due to NSW's COVID-19 issues, so it could be a difficult start.

People have noticed how Goorjian won’t let his young side find any excuses from being forced to leave Wollongong for a time. Goorjian has six NBL titles and has his eye on No.7 – it would be a fairytale.

Will Sydney fall off the pace without Andrew Bogut and Will Weaver?

The Kings took a massive leap last season under coach Will Weaver and with NBA-calibre stars Andrew Bogut, Casper Ware and Jae'Sean Tate pushing the side to the grand final.

Now Bogut has retired and Weaver and Tate are in the NBA, leaving Ware and new coach Adam Forde to keep the team moving forward.

It would be easy to write them off, especially with Melbourne, the Hawks, Cairns and the Breakers all making big signings, but I like the fight in this group.

Write off the Kings at your own peril but they can't leave any wins on the floor as there will be some talented sides who miss the finals.

Can the Phoenix step up into the top four?

I really like the group the Phoenix have for their second NBL season with Mitch Creek, Adam Gibson and Kyle Adnam joined by Cameron Gliddon and new imports Keifer Sykes and Ben Moore, who both appear to be NBA calibre guns.

But a month-long back injury to centre Dane Pineau sees them already under-strength, while the likes of rookie big man Yanni Wetzell is untested in this league and veteran forward Reuben Te Rangi has only played spotty minutes in recent seasons so may take time to adjust to a senior role.

If this group clicks, they will be very good. If they don't win games early, they could be the unlucky side who falls short.

How many interruptions can we expect and how will it hit teams?

Your guess is as good as mine but it's clear state governments will enact short lockdowns and border restrictions after just one or two cases.

We have already seen teams in Melbourne, Greater Sydney and Perth displaced during pre-season and the opening round looks likely to need some changes after the issues in Brisbane this past week.

It will hit teams hard should they have to spend long periods on the road while it could especially hurt some of the established sides like Melbourne, Perth, Brisbane and Sydney who have veteran players with families.

The addition of the Melbourne Hub and NBL Cup in February will bring a new element to the season and a new trophy. It could save the season if more delays kick in.

Are Cairns under the radar as a title contender?

Normally we would be singing the praises of Mike Kelly and the Taipans who have retained star imports Cam Oliver and Scott Machado, along with young guns Mojave King, Kouat Noi and the core of last year's impressive side.

But with so many distractions they have flown under the radar while a pre-season loss to Melbourne further put them down the list.

This group will only be better in their second year together, while both the two imports and King and Noi all have legitimate NBA dreams so would love to make this season the one where they make the leap to the title and then to the big time. They are good enough to do it.

Are there many future NBA prospects in the league?

COVID-19 has hurt this league in many ways but its spread around the world has seen a number of NBA fringe players look to play in safety here rather than overseas.

The likes of White and Vasiljevic would have likely played overseas, while Landale, Adel and Isaac Humphries would also likely still be either in the G-League or Europe.

It also looks more likely Adelaide rookie Josh Giddey and King from Cairns will figure in the NBA draft, possibly in the first round. NBA scouts will be wearing out the NBL app and Zoom calls this season.

Could this be the year Perth falls off the pace?

The pandemic has worn down more venerable institutions than the Perth Wildcats and their three-decade finals streak but it still is hard to picture an NBL top four without them.

The big test for the reigning champions will be leadership within their squad as this will be the first time in over a decade they will be playing without Damian Martin, Greg Hire or Shawn Redhage, who set the standard on and off court. Coach Trevor Gleeson knows this group well and franchise player Bryce Cotton is in his prime, plus they have very promising young guns starting to push for court time.

One horror scenario would be a prolonged border closure from the WA government, which has been lightning quick in locking down. The Wildcats are the NBL's road warriors but if any season could take them down, it will be this one.

Can the Breakers do what the Warriors couldn't and make finals while stuck on the road?

The Breakers have a celebrated history of title wins and resilience but this group has undergone a lot of change in recent years. Corey and Tai Webster are world-class guards, Thomas Abercrombie is still a quality veteran and leader while Lamar Patterson is a proven game-winner.

But the NRL's Warriors showed a long period on the road will wear down resolve and lead to patchy form. If the Breakers can resume home games this season, they will be thereabouts but if they are stuck on the road it may be too much for them.

Who will win it all?

As long as COVID-19 doesn't win and we complete the season I'll be happy. But it would be incredible to finish the season with a Melbourne v Hawks or Melbourne v Cairns grand final given the talent those sides have brought into the league, and the connection between their coaches, who have all played or coached together previously. Just having live basketball back on court will be a win we can all enjoy. And then we have the Boomers' medal chase at the Tokyo Olympics to follow.