Fresh from securing a play-off place, Utah Jazz slipped to defeat to Minnesota on Monday night, while there were differing fortunes for the Lakers and the Clippers as the end of the regular season draws closer.

The Jazz had become the first team to seal their place in the post season over the weekend but they came crashing down as they were edged out by the Timberwolves by just a point.

Behind them in the West, the Los Angeles Lakers ended a three-match losing streak with victory in Orlando, while city rivals the Clippers lost for just the second time in 13 games as Zion Williamson and the Pelicans kept their own slim play-off hopes alive.

D’Angelo Russell scored a game-winning layup in the final seconds and finished with 27 points off the bench to lead the Minnesota Timberwolves past the Utah Jazz for the second time in three days.

On Monday night in Minneapolis it was the Timberwolves who triumphed, winning 105-104 having won 101-96 on Saturday – in between, thanks to Sunday’s results the Jazz (44-17) became the first team to clinch a playoff spot.

This victory had some similarities to Saturday’s win in Salt Lake City, with Minnesota falling behind by 18 points (17 on Saturday) but then rallying to take the lead midway through the contest and then holding on to beat the league-leading Jazz.

Timberwolves, despite their lowly 18-44 record, have swept the Jazz 3-0 in their season series.

Mike Conley led the Jazz with 26 points and was positioned to be the game hero after hitting a go-ahead 3-pointer, but the game’s wild finish had more twists.

Russell took advantage of a blown defensive assignment by the Jazz, putting the T-Wolves up by one with a wide-open layup with just 4.2 seconds remaining. Conley then lost the ball after the timeout and the T-Wolves clinched the victory with the Jaden McDaniels steal. 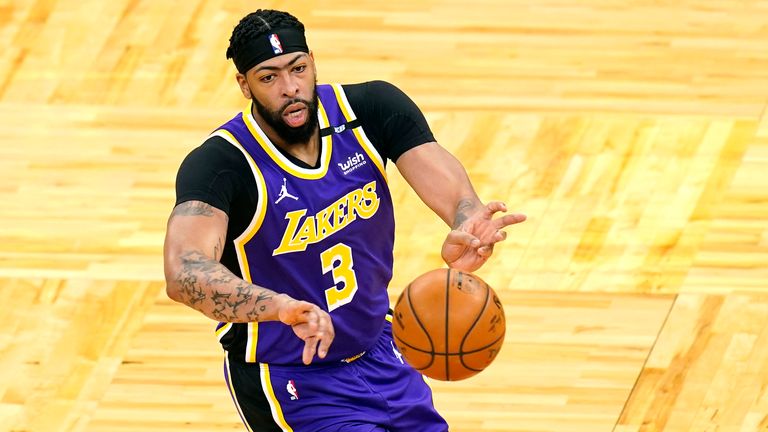 Dennis Schroder had 21 points and 10 assists to lead the Los Angeles Lakers to a 114-103 victory over the host Orlando Magic.

Anthony Davis and Montrezl Harrell each had 18 points for the Lakers (36-25), who snapped a three-game losing streak and dealt the Magic (18-43) their fifth consecutive defeat.

Davis played just over 31 minutes and delivered his best performance since returning from a 30-game absence due to right calf and heel issues, shooting 8 of 15 from the field (1-for-4 from 3-point range) and finishing with eight rebounds and three assists.

Leading 95-91 with 6:47 left, Schroder scored nine consecutive points and the Lakers, who hold the fifth-seed in the Western Conference, outscored the Magic 12-5 over the next four-plus minutes to pull away.

Chuma Okeke had 18 points and five rebounds to lead the Magic, while Gary Harris had 17 points.

Zion Williamson scored 23 points and Willy Hernangomez had a double-double as the host New Orleans Pelicans cooled off the Los Angeles Clippers with a 120-103 victory.

The Pelicans (27-34), who entered Monday’s game having lost five of their six, scored the most points by a Clippers opponent this season as they edged the season series 2-1.

Hernangomez, starting in place of injured Steven Adams (toe), had 12 points and 10 rebounds, Eric Bledsoe and Lonzo Ball scored 18 each, Brandon Ingram had 17 and Wenyen Gabriel 10.

Teams ranked 7-10 will participate in the NBA Play-In Tournament after the regular season (May 18-21) to secure the final two spots in the Playoffs for each conference. pic.twitter.com/4XQo1zRchb

Chris Paul scored seven points in a 70-second span late in the fourth quarter to ice a 118-110 comeback win for the visiting Phoenix Suns over the surging New York Knicks.

The Suns trailed by 15 points twice in the first half and didn’t take their first lead until late in the third against the Knicks, who had their nine-game winning streak – their longest since 2013 – snapped.

Devin Booker scored a game-high 33 points for the Suns (43-18), who are poised for their first playoff appearance since 2010 and are now just one game behind the Jazz who have lost two straight games.

Mikal Bridges had 21 points while Paul scored 20 points for the Suns. Cameron Johnson drained three 3-pointers in the fourth and finished with 11 points.

Derrick Rose scored 22 points off the bench for the Knicks (34-28), who held on to fourth place in the East by virtue of the Atlanta Hawks’ loss to the Detroit Pistons. Julius Randle had 18 points and Reggie Bullock and RJ Barrett added 17 apiece.

A dominant Sixers (40-21) ran out 121-90 winners to reach 40 wins in the fastest time since 2001 when they advanced to the NBA Finals and they now sit just one game behind the Eastern Conference leaders Brooklyn.

Tobias Harris contributed 11, Furkan Korkmaz and Paul Reed added 10 each and Dwight Howard swept 11 rebounds for the Sixers who snapped a season-high four-game losing streak. Starter Danny Green was held out with a sore hip.

The Thunder (20-41) were led by Ty Jerome with 22 points while Darius Bazley added 14, Moses Brown had 11 and Theo Maledon 10 but defeat left them equalling a franchise mark set in 2008 with their 14th consecutive loss.

A wild game went back and forth over the last five minutes of regulation and went to overtime on a layup by Washington’s Bradley Beal with 15.8 seconds left that tied things at 133.

It was more of the same in OT as Beal’s putback layup with 1:24 remaining in overtime put the Wizards up at 143-142, but the Spurs answered and then Patty Mills canned a pair of free throws with 5.3 seconds left to push the advantage to three points.

Beal finished with 45 points for Washington but missed a contested 3-pointer to level the contest again as the Spurs held on for a third straight victory.

Johnson added 21 points while Rudy Gay hit 17 points for San Antonio, while, alongside Beal, the Wizards saw Russell Westbrook added 22 points, 14 assists and 13 rebounds to record his 29th triple-double of the year, far and away the most in the league.

Jerami Grant and Frank Jackson each scored 18 points and helped the Detroit Pistons end their three-game losing streak with a 100-86 win over the visiting Atlanta Hawks.

The Pistons reserves outscored Atlanta’s backups 44-22 in a victory the saw the Hawks beaten for just the fifth time in their last 16 games.

Atlanta got 17 points from Bogdan Bogdanovic and 15 points from Kevin Huerter but could have lost two more guards with injuries. Huerter was taken to the locker room with an apparent left shoulder issue with 6:12 remaining, and Brandon Goodwin left the court in a wheelchair with a serious left ankle.

The Hawks were already without Trae Young (left ankle sprain) for the third straight game and were unable to use Lou Williams, who sat out the contest with flu-like symptoms.

Atlanta did get Kris Dunn on the court for the first time all season, after preseason surgery on his right ankle. He played 13 minutes and did not score.

OG Anunoby added 20 points for the Raptors (26-35), who have won five of their past six games and got the better of the three-game series between the teams over the course of the season.

Malachi Flynn scored 18 points off the bench, Khem Birch matched his career-best with 14 points and Kyle Lowry had nine points and 10 assists.

Isaac Okoro scored a career-best 20 points for the Cavaliers (21-40), who have lost six of seven while Darius Garland added 13 points and had 10 assists.

Richaun Holmes scored 24 points on 9-of-12 shooting to help the Sacramento Kings post a 113-106 victory over the visiting Dallas Mavericks.

Sacramento’s Harrison Barnes scored 19 points on 7-of-10 shooting before exiting due to left adductor tightness. Barnes was hurt while scoring after basket with 6:45 left in the third quarter and departed 15 seconds later.

Buddy Hield scored 16 points and Tyrese Haliburton added 14 points, 10 assists and three steals as the Kings (25-36) won for the third time in the past five games.

Good to see you too, Richaun! 💪 pic.twitter.com/mYUtUul6Hp

Luka Doncic recorded 24 points, eight assists and seven rebounds for the Mavericks (33-27), who had a three-game winning streak halted.

Trey Burke and Tim Hardaway Jr. added 19 points apiece for Dallas who were without Kristaps Porzingis (ankle) and Josh Richardson (hamstring), while De’Aaron Fox (health and safety protocols) was again sidelined for Sacramento.

Aaron Gordon scored 15 points and Paul Millsap had 12 off the bench for the Nuggets (40-21). Denver swept the three-game season series with the Grizzlies.

The ‼️ from BOL BOL! pic.twitter.com/g7RM1eszzG

Memphis (31-29) cut a five-point halftime deficit to 64-63 on a bucket by Kyle Anderson early in the third, but the Nuggets responded with an 11-2 run on their way to victory.

Nikola Vucevic scored 24 points and grabbed 11 rebounds, leading the visiting Chicago Bulls to a 110-102 win over the short-handed Miami Heat.

Chicago (26-35) are now 4-2 in their past six games, beating Miami for the first time in three tries this season as Daniel Theis added 23 points and a game-high 12 rebounds while Coby White added 18 points.

The Heat (32-30) got a game-high and season-high 33 points from Jimmy Butler, who missed a key layup attempt late in the game. Miami also got 23 points from Bam Adebayo and 18 points from Trevor Ariza.

Miami was without three players who are considered day-to-day: Nunn (neck spasms), Tyler Herro (foot) and Andre Iguodala (hip). In addition, Victor Oladipo is likely out for the season due to a knee injury.

Want to watch even more of the NBA and WNBA but don’t have Sky Sports? Get the Sky Sports Action and Arena pack here