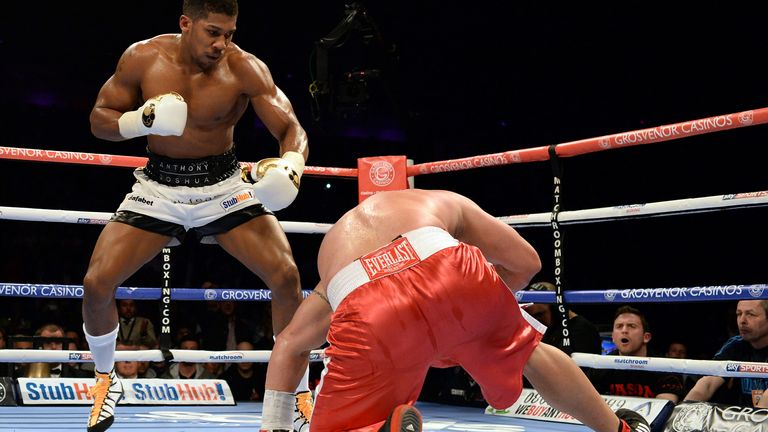 Jason Gavern is the type of guy who will drop everything and fly anywhere at a moment’s notice if a major heavyweight name like Anthony Joshua, Deontay Wilder or Tyson Fury needs help in training. Or an opponent.

He is proud of that. He lost in four rounds to Wilder, and in three rounds to Joshua, but it was sparring with Fury that truly took his breath away.

“It was crazy how good Tyson was, and this was six years ago. I sparred with Fury in Bolton for 10 days,” Gavern told Sky Sports.

“Joshua is more technical than Wilder. Look at their records – he doesn’t have the same knockout stats that Wilder does.”

Gavern has felt the power of both men and says about Joshua: “He didn’t hurt me with the first couple of knock-downs, they were just flash knock-downs. But the last knock-down? He hurt me. Even when I went back to the locker room, I was still wobbly.

“I was never hurt against Wilder.” 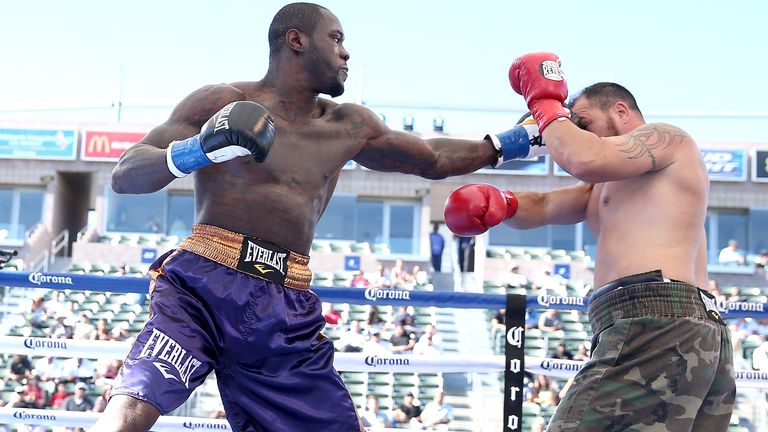 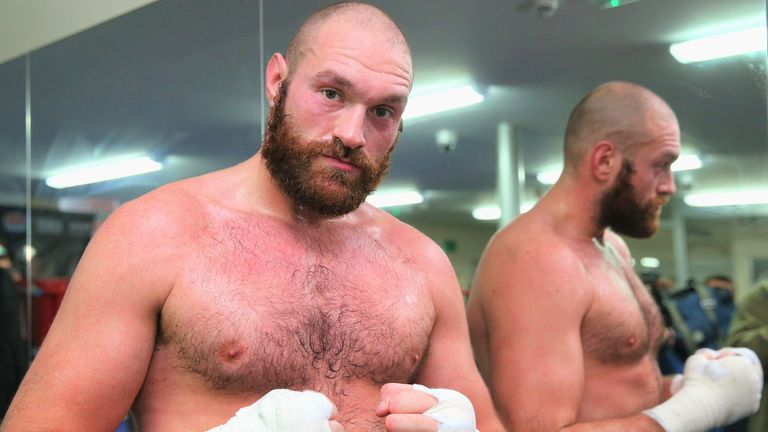 Gavern has lost 21 of his 52 fights but was a convenient measuring stick as heavyweight up-and-comers built their careers. By comparison, Joshua beat Gavern in his 11th fight and Wilder beat him in his 32nd.

That is a valuable skill-set. Gavern represents a rung on the ladder for future champions like Joshua and Wilder, destined to be nothing more than a forgotten moment in time on their journeys to stardom. But briefly, he is needed.

“I fought Wilder on four days’ notice. I had five days’ notice to fight Joshua,” he explained. “I was in Florida, had to fly to London, have a press conference, take a five-hour train to Newcastle…

“I wasn’t in the shape that I should have been.

“They were never going to give me 10 weeks to fight Joshua. They gave me five days because his [scheduled opponent] fell out.

“Boxing is about opportunity – what happens if I catch him and knock him out? It would change my life. That’s the mentality.

“I didn’t get to 49 fights [by the time he fought Joshua] by accident. I have years of training, years of experience, years of camps, years of sparring. Even though I’m out of shape on a particular day, I have a boxing mentality. I understand the game of when to fight, when to rest, when to hold, how to survive. That made my chances better.

“But the night I fought Joshua? He was bigger, stronger.” Gavern understands his place in the boxing hierarchy. He knows why the phone rings and why he is required to fly across the world. He knows it is not because he will become the next big superstar of the sport.

“I’m the journeyman, the gate-keeper, whatever you want to call it,” he says.

“Boxing needs championship fighters but boxing also needs your gate-keepers,” and at this point Gavern’s voice breaks and he briefly goes silent.

“I never went into boxing to be a gate-keeper. Every fight I had, whether it was Joshua or Wilder on a few days’ notice, I was coming to knock them out.

The night Gavern reluctantly accepted his lowly role in the heavyweight landscape is clear in his mind.

“I fought Johnathon Banks on the same night as Vitali Klitschko fought Albert Sosnowski,” he remembers.

It was 2010 and Gavern had already lost seven of his 29 fights but retained hope and ambition. That dissipated when, he believes, he was handed a duff scorecard against the man who would go on to become Wladimir Klitschko and Gennadiy Golovkin’s trainer.

“When they gave me a draw it was a stab to my heart. It was devastating.

“After that, I lost seven in a row. I thought: ‘What is the point?’

“It was extremely frustrating and aggravating.” 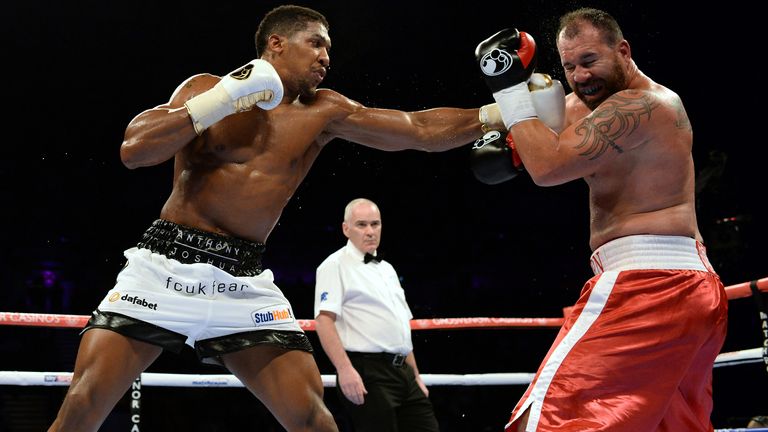 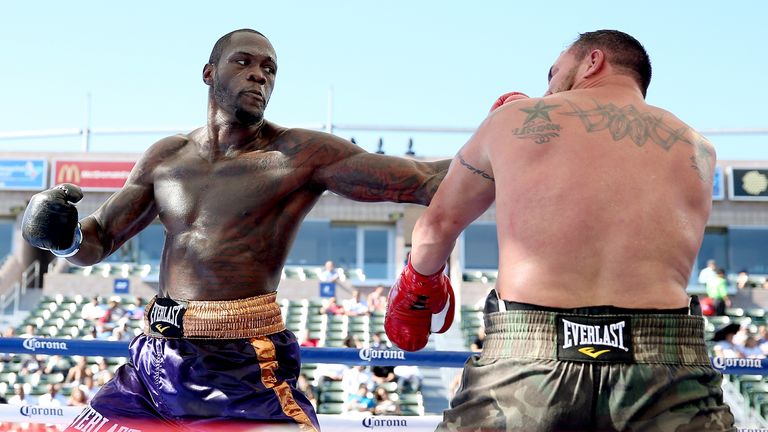 From then on, Gavern used boxing to realise new dreams. He had been to Germany and Switzerland for fights but began accepting whatever assignment was put to him.

‘Are you free to fight the unbeaten Mariusz Wach in two days?’

‘Are you free to fight the unbeaten Alexander Ustinov?’

‘It’ll be in Ustinov’s home country, Ukraine, and the Klitschkos will be there’.

Gavern headed to eastern Europe – Ustinov used him before facing Kubrat Pulev for the European title.

The flights became longer and longer.

“I fought Lucas Browne in Hong Kong on a few days’ notice. I got a call Monday, flew out, then stayed for a little vacation after the fight.”

Gavern lost all of these fights.

“I hung out with celebrities and royalty, and went to so many different places by accident,” he beams now. Maybe a notable exception was his first venture to the UK for a Prizefighter tournament in 2013. He beat a 45-year-old James Toney, who he had spent years sparring with, in a three-round bout.

For every story of success and glory from Joshua, Wilder or Fury, there are a thousand tales from boxers like Gavern who speak of uphill battles, unfair scorecards and hopelessness.

At his core he is tough, tough bloke – he served in the US army, is a police officer to this day and it is worth remembering he climbed off the floor against both Joshua and Wilder. Staring defeat in the face he chose to bravely go as far as his toughness could take him.

Now aged 43 and four-and-a-half years since his most recent fight, a loss to Dave Allen in Sheffield, he says: “I’ve got the itch. I know a lot of up-and-coming heavyweights need someone to fight. I haven’t got a call since my Dave Allen fight, which was the worst of my career. I had a lot going on behind-the-scenes for that fight.