WBO super middleweight champion Billy Joe Saunders had his licence suspended by Britain's boxing authorities after a social media post in which he advised men how to hit their female partners during the coronavirus lockdown.

The British Boxing Board of Control (BBBofC) says that Saunders' licence will be suspended until a hearing can be arranged under its misconduct regulations. 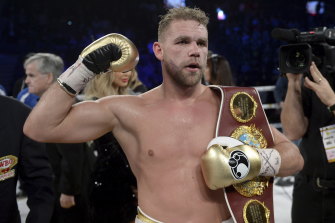 Saunders had filmed himself punching a bag in a barn and advising "dads, husbands and men with girlfriends" how to deal with their female partners during the coronavirus lockdown.

"If your old woman is giving you a little bit of mouth and you try to be patient … but about the sixth day you're just about to explode," he said in the video, before demonstrating how to "hit her on the chin".

Saunders apologised for the video on social media over the weekend and again on British radio station TalkSPORT on Monday, when he also pledged to donate £25,000 to domestic abuse charities.

"I just want to say sorry again for everyone I've offended," he said on TalkSPORT.

"I looked at it as a bit of a joke at first – I obviously wasn't thinking right – but looking back at it now I can clearly see the destruction it has caused among the women suffering from domestic violence.

"It was a silly mistake but I didn't intentionally mean to cause harm to anyone and I certainly wouldn't promote domestic violence."

Saunders was scheduled to face Mexican Saul 'Canelo' Alvarez in a super middleweight unification bout on May 2 in Las Vegas before the outbreak of the coronavirus.

The Briton, who is unbeaten in 29 bouts and held a world title in the middleweight division before moving up to super-middleweight, was fined £100,000 by boxing administrators in September 2018 for a previous social media post.

In that instance, Saunders posted a video on social media in which he offered a woman drugs to perform a sex act on another person.