Anthony Joshua’s promoter Eddie Hearn says that Dana White’s decision to go ahead with UFC 249, as well as his plans to hold fights on a private island, has been made in ‘bad taste. Hearn has had to cancel or postpone six of his Matchroom boxing shows because of the growing coronavirus pandemic.

Boxing events aren’t taking place in the UK because of the crisis, while shows in the U.S. are also on hold. Other popular sports like football and basketball have had to suspend their leagues until they’re safe to resume.

But White, who had to halt three shows in March because of the virus, is insistent with his plans to re-start things on April 18, which is the planned date for UFC 249.

Khabib Nurmagomedov was supposed to defend his UFC lightweight world title against Tony Ferguson on that card, but the Russian is stuck in his home country on lockdown because of the virus.

Despite calls for UFC 249, which was scheduled to take place at the Barclays Center in Brooklyn, New York, to be cancelled, White insists he has a location ready and raring to host the new main event – Ferguson vs Justin Gaethje.

JUST IN: Anthony Joshua admits he could have been ‘carried out on stretcher’ 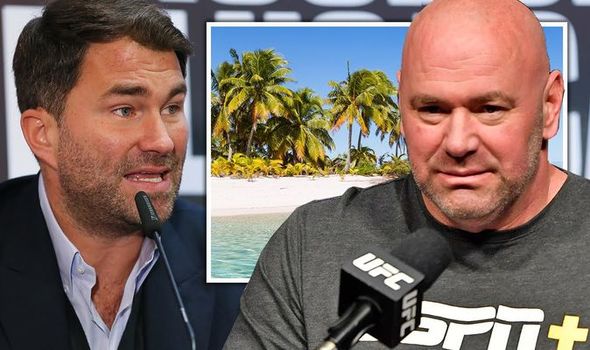 White also said that the venue will be his to use freely for the next two months, and that he is close to securing a ‘private island’ for his international fighters to compete on.

But Hearn, who half-admires White’s stubbornness, thinks the plans are being made in bad taste, considering the impact coronavirus is having across the world.

There have been over 1.3million confirmed cases of the virus worldwide, with over 70,000 deaths reported.

“It’s unbelievable, I’d like to think that in boxing, there’s no-one more roll your sleeves up and get on with it than me,” Hearn told Express Sport.

“But even I wouldn’t consider staging an event right now. I’m not even thinking about options, not even on the radar.

“This is stubbornness. These are many of the things that make him successful but at some point you have to sit back and say ‘white flag’.

“I’m quite surprised ESPN are going ahead with this, obviously they want ratings and money.

“But with Sky Sports and DAZN, I would not be allowed to stage events right now. It’s bad taste to be quite honest. 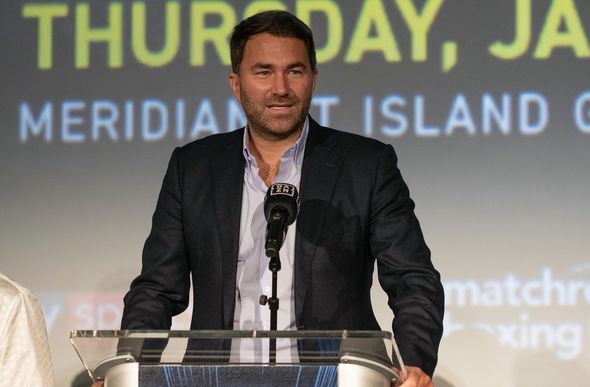 “He wants to be a trailblazer, people have told him he can’t do it. But I know the feeling of being told something and you do it anyway.

“Half of me admires him for cracking on but the other half says ‘come on don’t be mad’.”

Hearn mentioned that fellow promoter and legendary boxing figure Bob Arum is on the same page as him in regards to attempting to schedule fights.

“I was on the phone with Bob Arum yesterday with Pulev’s team too and Arum’s like ‘I like you guys but why are we wasting our time on this call? Let’s speak at the end of the month and we’ll know more’,” he added.

“It hasn’t really affected our business too much. Financially we’re okay, other than some initial costs which we couldn’t get back.

“We’ve built up a decent business over the last eight years, we’re in a strong position with good liquidity.”