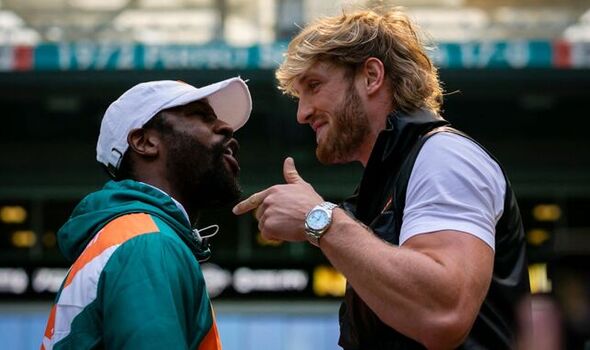 Logan Paul has finally revealed how much money Floyd Mayweather owes him after their exhibition bout in June of last year.

Paul shocked boxing fans as he managed to survive the full eight-round distance against Mayweather in Miami. The event drew in massive numbers with over one million PPV’s being sold. Both men were given staggering purses for the fight as Mayweather reportedly earned around £52million and Paul roughly £15million.

But since the fight, Paul has repeatedly claimed that he has not been paid a sizeable sum of his purse by Mayweather.

During an interview on Andrew Schulz’s Flagrant podcast, Logan was quizzed on how much Mayweather owed him, to which Paul replied:  “Millions. Probably just under 5 [million], over 2 [million]. Yeah, like enough for me to [say] pay me my f***ing money.”

Paul went on to explain: “How can he do that? Is it not held in escrow or some s***? Mayweather has been boxing forever, he knows how to allocate money conveniently to make it look like it is an expense. He thinks he can do what he wants because I am new to the boxing game. See you in court! How many lawsuits can pile up for the same event?”

At the start of the podcast, Paul ripped into Mayweather as he demanded the boxing legend coughs up the cash he owes.

He said: “Floyd Mayweather, you punch drunk idiot. Read my lips… oh wait, you can’t! Where’s my money b**ch? Floyd never paid me for our fight. Who am I, the IRS? You can’t dodge taxes like you do punches, dummy. Floyd, how can you call yourself the GOAT? You couldn’t even finish me, what am I, high school?”

Mayweather has since dismissed the accusations, claiming that Paul recently reached out to negotiate a rematch. He said: “This is the guy who said he didn’t get paid which we know is truly false, which is why I don’t entertain the bull**** a lot of the time,” Mayweather said at the press conference to announce his latest exhibition fight, against Japanese mixed martial artist Mikuru Asakura.

“We know he got paid and if he didn’t get paid, he wouldn’t be trying to get another payday. It is so crazy that Logan Paul wants to do an exhibition again, but it is the same guy that said he didn’t get paid. It is what it is.”

Mayweather is set to face Asakura in September, while Paul’s next opponent is expected to be MMA fighter Dillon Danis with ‘The Maverick’ confirming he wants Danis next on the same podcast.