‘There’s nothing like this business for making you feel alive’: Legendary promoter Barry Hearn reflects on returning to work just days after suffering his second heart attack

For once, the old salesman cannot come up with a figure. He has a little think but struggles to settle on exactly how long had passed before he went back to work.

‘I left the hospital at around 5pm on the Wednesday,’ he says. ‘Now, did I do anything on my phone that evening? I don’t know.

‘But I was definitely doing a bit at home the next morning — something for the darts. You know, this Home Tour we had the players doing. Did you see it? One of the lads threw a nine-darter in his kitchen. Sport, hey? Bloody love it.’ 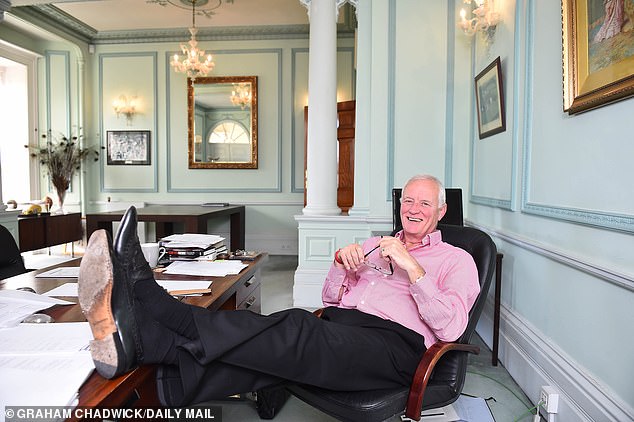 And with that, the marvellous Barry Hearn declares himself on the mend and stronger by the hour.

The events of April 5 and the attention it generated are now more of ‘an embarrassment’ than anything else in the mind of this sporting kingpin, who says it’s all a fuss about not very much.

Or, as he also put it: ‘It was just a mild heart attack, really.’

Aged 71, Britain’s most wide-reaching promoter may just have dabbled with his first understatement. ‘This was not a big one,’ he adds. ‘My other heart attack, in 2002, that was proper. This one? This wasn’t life or death.

‘Insignificant when you think what is going on in the world at the moment. I’m OK.’ 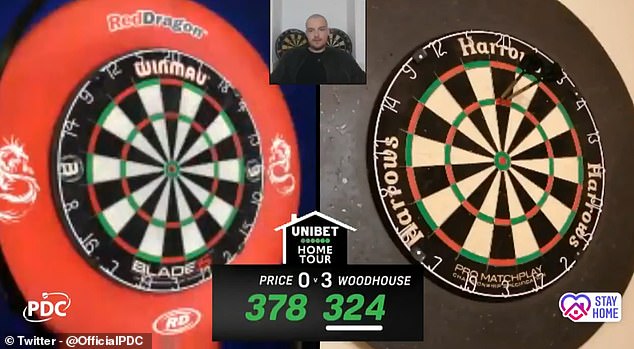 He takes us back to Saturday, April 4 and a gym workout after a month of lockdown tedium.

‘I’d been smashing myself up a lot because I’m so bored,’ he says. ‘I’d had 30-odd consecutive days in the gym. I’m 72 in June and sometimes I forget that. I’m a bit Peter Pan in my childlike view so I had a session of two and a half hours and it probably brought it on.

‘On the Sunday, I then went to do a light workout and got some chest pains. I called a couple of people and then took myself to hospital at about 10.30pm. I was lucky I did.

‘The NHS, who were as brilliant as always, had me one night in critical care, one night in the cardiac unit, and the next day I had an operation and two stents put in. The following day, I went home. I’m fine.’

There’s a pause and then he goes again.

‘The main thing I will tell you about the whole experience: the apple crumble and custard in the cardiac unit at Basildon Hospital. It’s different gravy.’

So is Barry Hearn. Always has been.

The bankable trait in the uncertain business of heart attacks is they inspire survivors to reflect. For that reason, Hearn is in the mood to reminisce about his five decades in the business of sport. 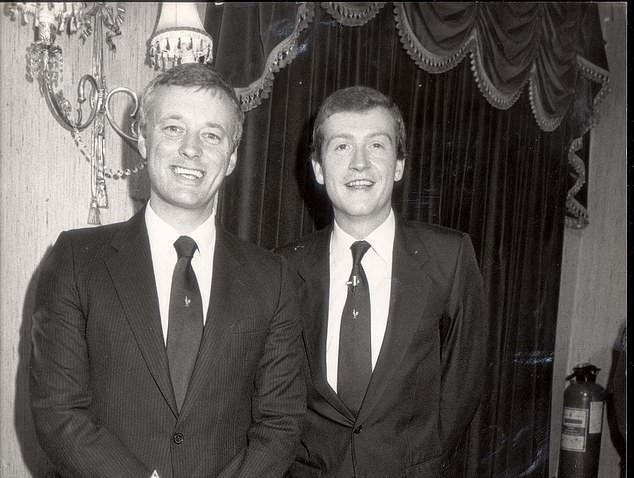 He was a chartered accountant once upon a time, a working-class son of a bus driver from Dagenham who had washed cars and picked fruit before he eventually got into investments.

Hearn made enough from that to buy a few snooker halls. And he was at the one in Romford in 1976 when a ginger lad, with a perfect cue action, rocked up to table 13.

‘Me and Steve Davis,’ he says. ‘Two council-house boys with nothing who wanted to achieve a lot. That was the start, managing him, up and down the country on the hustle. As long as I live, him winning the World Championship in 1981 will be the best moment I have in sport.

‘We used to talk all the time about what we might do, late into the night in the pub, tears rolling down our faces because we wanted it so bad — him to be the best snooker player, me a successful person.

‘And then he pots a pink to win the final against Doug Mountjoy. I’m sitting in the crowd saying to myself, ‘Don’t do anything stupid’. And the next thing, I have jumped on the stage and smashed him with a body check.’

What played out from there was the start of one player’s decade-long domination of snooker in its prime and another man’s rule of sporting promotion. 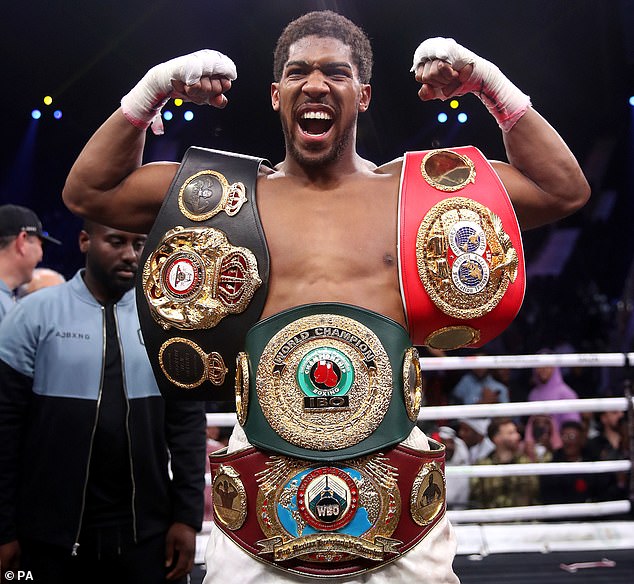 From Anthony Joshua’s sell-outs to 20-plus years of fishing on Sky Sports, ping pong, third-tier golf and poker, Hearn’s Matchroom company have always found a finger for a pie. They have 12 sports on the go at the moment and ran more than 600 event days last year.

Hearn has been the face of it all, the wheeler and dealer — and charmer and chancer — who has quintupled snooker’s prize fund in the past decade and opened a darts office in China. Or rather, he used to be the frontman until his son, Eddie, came of age.

‘The joke I make is, if I come back in another life, I want to be Eddie Hearn,’ he says. ‘He learnt at the feet of the master.’

Hearn is laughing — he is remembering the biggest whopper he told. It goes back to his first foray into boxing in 1987, five years after making £3.5million from the sale of his snooker clubs.

‘I was starting with a big one — Frank Bruno-Joe Bugner in 1987,’ he says. ‘BBC had turned the fight down so I turned up at London Weekend Television’s offices. I picked up the phone in reception, got through to Greg Dyke and talked myself into his office. I sold the idea of the fight to him in under five minutes and I asked for £200,000. He said he would give me £250,000 as he didn’t believe I could get it done.

‘The funny thing is, I don’t think I even had the fighters properly signed at the time.’ 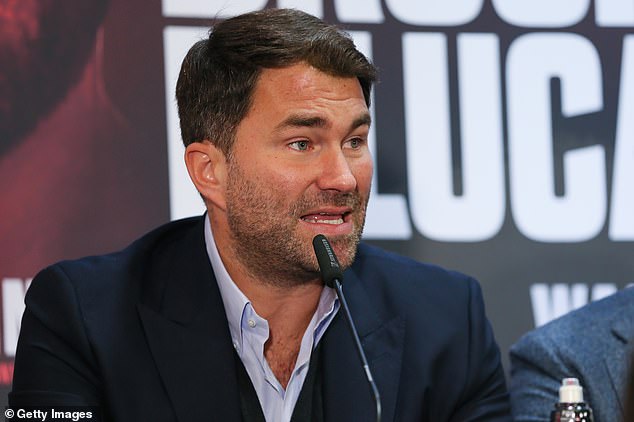 Eddie Hearn has followed in his father’s footsteps, becoming a successful boxing promoter

It was in boxing where Hearn first encountered a burning and bonkers comet of a man.

‘Oh my God, I’ll tell you a story,’ he says. ‘The snooker referee Len Ganley got on the phone to me in 1989 and said, ‘There is a kid here at the World Championship who wants to meet you’. I go there and this boxer walks in, less than a dozen fights under his belt.

‘Anyway, his opener is, ‘My name is Christopher Livingstone Eubank, I’m an athlete and I know my worth’.

‘I just fell in love with him on that day and he left with a deal for three fights. Sometimes that is what genius is — someone who can turn a light on in a room.’

Hearn has encountered a few of those mercurial talents and their unfathomable personalities. His clashes with Ronnie O’Sullivan in his role as the boss of snooker over the past decade have been numerous. ‘Most of my grey hairs are named after people like Chris and Ronnie,’ he says. ‘But without that personality, they would not play their sport the same and we would all lose, because who doesn’t love watching these guys?’ 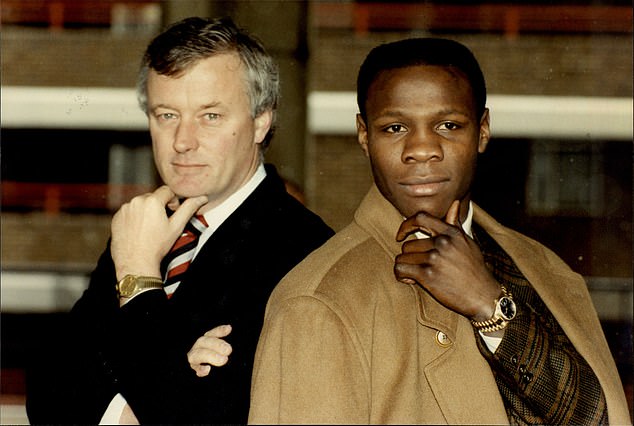 The brilliant and flawed Alex Higgins was a different level of challenge.

‘Blimey,’ says Hearn. ‘He once came to play an exhibition with Steve Davis at Romford over four afternoons and four nights, best of 65 frames. After six sessions, the fans were giving him so much abuse that he swore at all of them and stormed out.

‘He was in an objectionable state, drink-induced, and told me he would never come back. We had a terrible argument in my office and I end up with him pinned against my wall, me about to chin him.

‘He left and the following morning he came in as if nothing happened, couldn’t have been nicer. In the first frame he made a break of 135. Jekyll and Hyde.’ 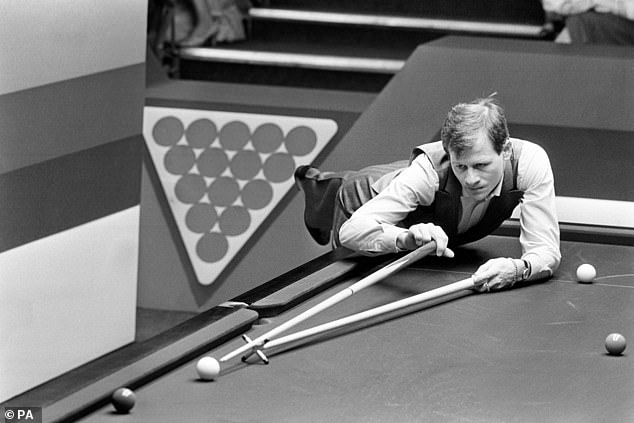 The biggest row was with the luminous and ludicrous boxing promoter Don King.

‘In 1993, we co-promoted Eubank’s rematch with Nigel Benn,’ he says. ‘Don thought he had a contract with me to acquire the services of Eubank and Benn after the fight. But I wrote the contract and it said he would have the winner and loser. Well, the fight was a draw, of course, so his contract was meaningless and he went crazy and we didn’t talk for three years. I had a smile on my face the whole time.

‘Honestly, there’s nothing like this business for making you feel alive.’

Hearn is contemplating the end. Heart problems took his father early, aged only 44. ‘I’ll start handing over the reins more in the next year,’ he says. ‘This recent stuff maybe speeds up that thought. But stop completely? I don’t know if I know how.’

He laughs again. ‘Even now, the fun is still in figuring out the challenges. Coronavirus is obviously a huge one, so we are getting creative. Eddie is already coming up with some exotic plans for boxing so we’ll see.’

The delightfully quirky Home Tour of darts has already been a success. ‘If the world is a starving man at the moment, then we gave him a little sandwich,’ he says. 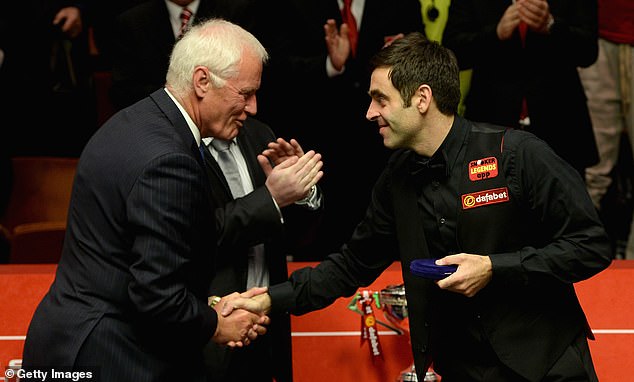 It has joined a long list of wins. There have been far more of those highs than lows in Hearn’s working life, the worst of which was a brush with bankruptcy in the early Nineties recession.

‘The biggest fear for any working-class person is having nothing again,’ he says. ‘That is why I never took massive risks with the business.’

Eddie, by the father’s reckoning, is less cautious, but by the same man’s view he is ‘the next level’ in promotional terms.

If the elder has any regrets for how he himself has done things, it is over the one that got away.

‘Twenty20 cricket,’ Hearn says. ‘I wish I started that. That is me through and through — entertainment and sport. Because why does everything have to be so bloody serious?’

If anyone has given their life to nailing that case, then it is Barry Hearn. And his heart is still in it.