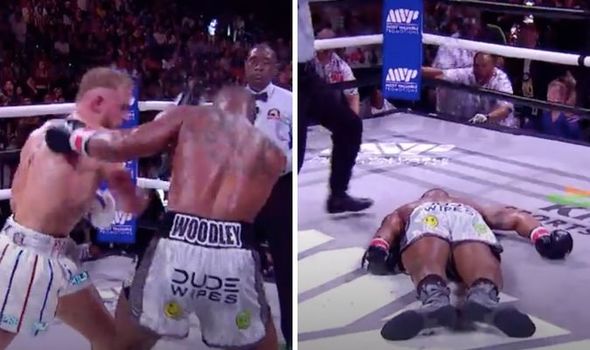 Say what you want about Jake Paul but the man has dynamite in his gloves as he delivered a chilling knockout of Tyron Woodley that let him flat out on the canvas.

It was a brutal right hook that closed the show, leaving Woodley face down in worrying scenes.

After a rough and ready opening round, Paul started to let fly in Round 2, when he looked to set up the big, looping overhand right.

Woodley appeared to be falling into the same traps as he did in the first fight, letting Paul get in on the inside as he looked to grapple his rival.

In the third, Paul was then cut following an accidental elbow in the view of the referee as Woodley literally smelt blood as he watched it seep down the YouTube sensation’s forehead.

It appeared to be the wake up call Woodley needed as he backed up Paul but replays later showed it was in fact a clash of heads that caused the wound.

Woodley was then given a firm warning in the fourth when it appeared to virtually dump tackle Paul to the canvas, he was now the aggressor in the fight.

The crowd then started to boo in the fifth and they were clearly disappointed with the way the main event was panning out.

Paul and Woodley continued to wrestle, as the pair clashed heads in Round 5 before being separated by the referee, who said: “Are we gunna fight?”

“This is pretty tough to watch to be honest with you,” was the line from the commentator as the pair attempted to trade leather in the sixth.

For someone who had been offered an additional $500,000 in his