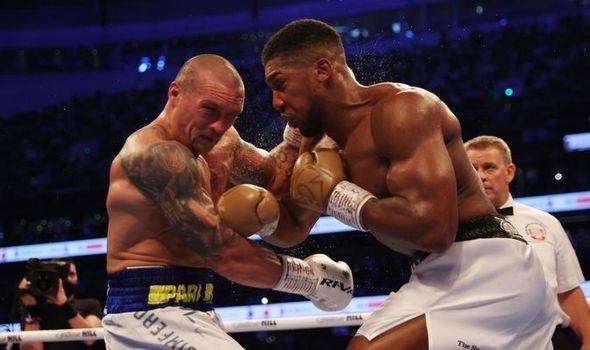 Anthony Joshua will defend his WBA, WBO, IBF and IBO world heavyweight titles tonight against mandatory challenger Oleksandr Usyk, as all three belts go up in the air here at the Tottenham Stadium. The slick, unbeaten (18-0) southpaw is looking to fulfil his childhood dream when he steps through the ropes, by becoming the king of boxing’s blue-ribbon division.

Two-time world champion AJ is under no illusions this could prove to be his toughest and trickiest career test to date and he has commended his Ukrainian opponent for stepping up to the plate after just two fights at heavyweight.

“When (Evander) Holyfield came up to heavyweight I think he had six fights at heavyweight before he fought for the championship belt,” said Joshua on fight week.

“Usyk’s fought two heavyweights. He’s jumping in at the deep end early on. But good luck to him – he must believe in himself. He wants to be at the top end early. It’s better to swim deep — get in there and get on with it — rather than tread water.

“You could still end up drowning anyway. You could still get caught in a current and drown. You might as well jump in the deep end and try to survive.”

Usyk cleared out the entire division at 175lbs to become the undisputed cruiserweight king before stopping Chazz Witherspoon and outpointing Dereck Chisora in his first two fights at boxing’s top table.

Meanwhile, 31-year-old Joshua is back in action for the first time since December 2020 when he successfully stopped seasoned veteran Kubrat Pulev at Wembley Arena.

Eddie Hearn is anticipating a crowd of well over 60,000 people at the Tottenham Hotspur Stadium and you can follow updates throughout the night with Express Sport as Lawrence Okolie, Callum Smith and Campbell Hatton also feature on the undercard…

There has already been a win for Christopher Ousley, who successfully outpointed Zaurbek Baysangurov in the opening bout at 5pm.

Florian Marko and Maxim Prodan are now in the ring and the Albanian has plenty of fans in attendance making their voices heard. Red flags everywhere you look…