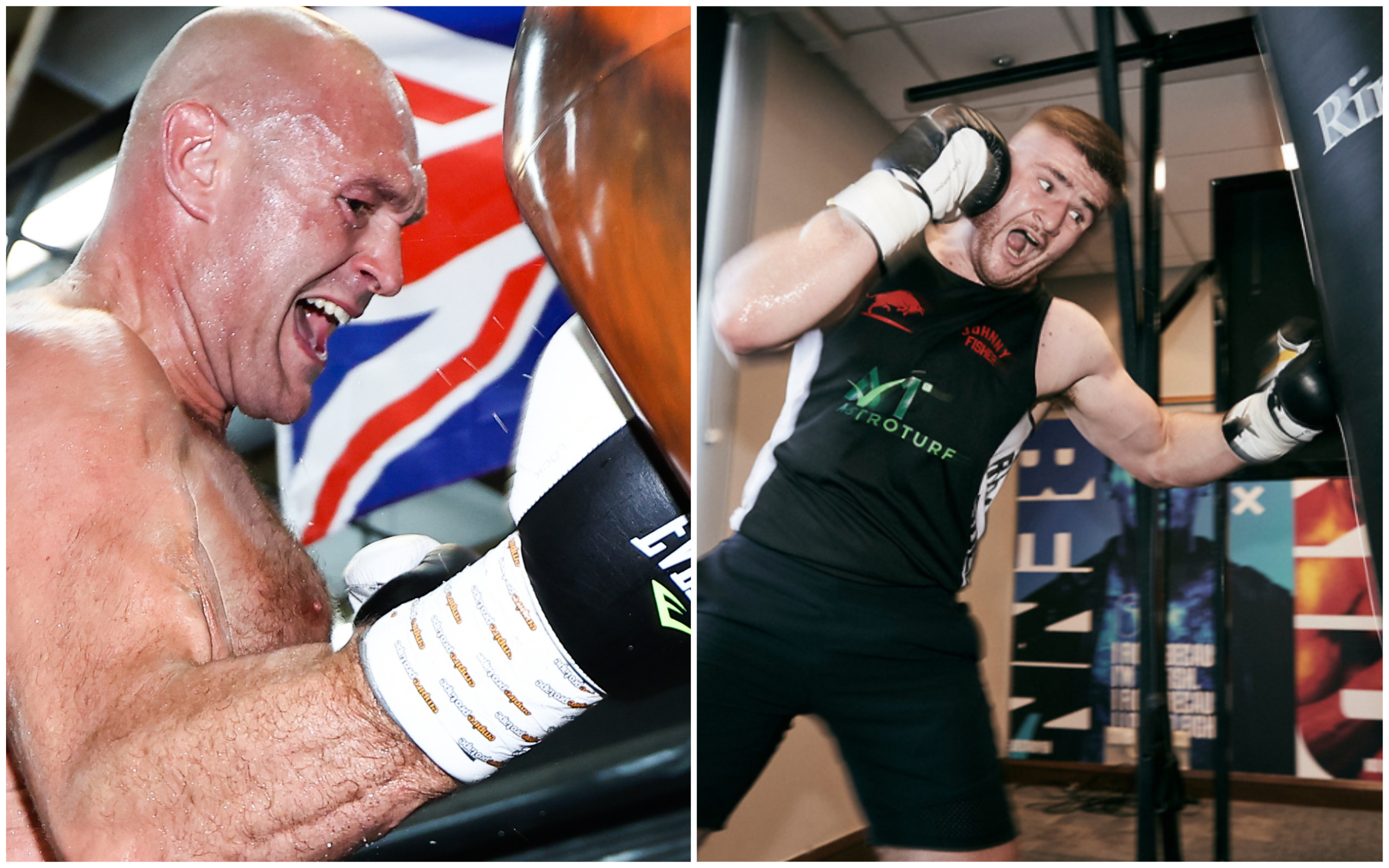 A world away from the Las Vegas strip, Tyson Fury saw out his final weeks of his training camp back home in Morecambe.

During the meticulous process of fine-tuning the champion, heavyweight prospect Johnny Fisher was drafted in for those crucial final sparring rounds, tasked with replicating the aggression of one of the game’s biggest punchers in Deontay Wilder.

Fury and Wilder meet in their trilogy fight this Saturday with ‘The Gypsy King’ out to end the American’s bid to reclaim the WBC title once and for all.

After an original date in July was shelved due to a positive Covid test, training camp resumed back home in the UK where 22-year-old Fisher was invited to put the champion to work.

Signed up with S-JAM Boxing and promoted by Matchroom, ‘The Romford Bull’ has racked up an impressive 3-0 record since turning professional at the start of the year – with all of those wins coming via knockout inside three rounds.

Fisher has previously put in the rounds with anther British heavyweight star in Joe Joyce – finishing his university dissertation from Las Vegas after being brought out to work with ‘The Juggernaut’ during the final stretch of his degree last year. Working with Fury, Fisher impressed head trainer SugarHill Steward enough to be invited back for future camps.

‘Within five minutes of talking to Tyson, you almost forget he is the best heavyweight on the planet,’ Fisher told Metro.co.uk.

‘He had time for all the sparring partners who worked with him up there and I sparred with him a couple of times. He was impressed with me each time. Don’t get me wrong, he was levels above what I am, but I gave a good account of myself and he wants me back in all of his camps now which is great news for me and for my development.’

Fisher experienced first-hand the levels in which Fury operates with the youngster’s raw talent and power identified as key factors needed to put the champion through his final tests.

‘There was one final week of sparring left in England before he went out for Vegas, Sam [Jones] was asked if I was available because they wanted that aggressive spar. I think they wanted a bit of pressure coming forward and I think that is why they drafted me in.

‘I’m a mix of old school and new, I’m very come forward and aggressive, they are my natural instincts.

‘Of course he is going catch me, isn’t he? He is the best in the world. I took them and had to keep coming forward. I landed a few of my own too! But his ringcraft and ability is unbelievable and to be in the ring and learn off him and particularly SugarHill was amazing.’

Recalling his conversations with Fury’s trainer, he added: ‘He said: “You’ve got great speed, you’ve got great credentials, you’re tough, you come forward.”

‘He told me I have all the raw ingredients and said to keep refining those and stay dedicated. That is what I have been doing and to have it reaffirmed by someone as high up as him was brilliant.’

Fury has worked with a number of different sparring partners for each of his three meetings with Wilder, with Fisher tasked with replicating the threat the American still carries despite the one-sided beatdown he received in their first rematch back in February 2020.

And while Fury has been typically confident leading up to the trilogy, Fisher insists every angle has been covered.

‘Don’t get me wrong, we like a laugh but that is complimented by that hard graft and training.  Boxing is very tough, the physical training of course but the mental side too. So I think it is important he has that light-hearted side because it can be hard.

‘But when it gets down to business you feel and know he has got a fight on his hands against the most dangerous puncher on the planet in Wilder. He has got to be ready.

‘You can just never tell with someone like Wilder and their punch power. It can all end in one round. Tyson has got to be on his game. But I can’t see any other result than Tyson getting the win again. I think we could see a similar outcome, it could finish even sooner. For one, Wilder will still be mentally affected from what happened last time. And two, Tyson is in unbelievable condition.’

Fisher, who is trained by Mark Tibbs, will hope to take the skills he has picked up from the Fury camp and continue his development when he returns to the ring at the end of October on the Dillian Whyte vs Otto Wallin undercard.

It will be his fourth big show this year following appearances at Wembley Arena, Manchester Arena and Matchroom HQ near home in Brentwood.

‘I couldn’t have asked for much better with how my year has gone,’ he said. ‘I have worked hard – I’ve had a bit of luck as well, but I think you need both. You have got to perform on the night too and I’m ticking all those boxes.

‘I have been treating it all us a bonus. A year ago, I was just finishing university, in a difficult climate during Covid so I have been enjoying getting the opportunities to box on such big platforms.

‘It is something other boxers dream of. I would be doing myself a disservice if I wasn’t enjoying it, it takes that bit of pressure off me. I know I have got a long way to go and I’m just going to keep working hard.’