Wladimir Klitschko’s brutal training camps in the Austrian mountains were a rite of passage for up-and-coming heavyweights including Anthony Joshua, Tyson Fury and Deontay Wilder. These are the best sparring stories to emerge from those heady days…

When Joshua and Klitschko first shared a ring

Years before Joshua’s stunning Wembley triumph with the world heavyweight title on the line, he was an up-and-comer than took vital experience from Klitschko.

Joshua told Sky Sports about training with Klitschko: “Sparring, for me, I would rather they hit me so I can learn to defend. Everyone knows how to throw a punch. I was learning how defend. It was just sparring, I wasn’t trying to prove anything.”

Klitschko told Sky Sports: “We did plenty of rounds, about 20. I was going through a lot of rounds, about 115 rounds in that camp. Definitely you could feel his athleticism. He’s very athletic.

“It was not my best jab. During the sparring session, the preparation, how I do it – you have something you need to practice, so you do it. And you are adjusting it to every guy so, in 12 rounds of sparring, I’ll have four guys sometimes, or five or even six guys.

“We were pretty competitive. We respect each other, but both competitive. There was no dominance from either of us. It was pretty equal.”

Did Klitschko knock Wilder out?

“I’ve seen him getting knocked out,” Dillian Whyte said about Deontay Wilder. “Wladimir knocked him out.

“He knew what happened. He had his hands up. He was roughing Wlad up, bringing the smoke, and he was going wild.

“Wlad backs up, changes his footwork, feinting, feinting, jabs to the body, throws that feint jab, left hook. Wilder had his hands up, he was gone.

“It wasn’t no knock down, he was knocked cold. Properly twitching as well.

“That’s why they probably didn’t want him to fight Wlad, because Wlad was going to fight him as a pro and Wilder never fancied it the whole time.”

Had a great Birthday w/ team @Klitschko and the camp much love guys!! pic.twitter.com/hk9OuOn8

Wilder told Sky Sports about his time in Klitschko’s camp: “I fought Kelvin Price a couple of weeks after it [three years before becoming WBC champion], but there was no way I was not going to go out there. They treated us really well as soon as we got there, as well.

“I learned a lot and enjoyed myself while I was there too. I did over 50 something rounds. I was the head sparring partner there. We sparred so many rounds, so many times, I felt I should’ve been the only sparring partner there! He goes 100 per cent when he’s sparring. Actually, Wlad goes 110 per cent in the ring, there’s no half-way with him, it’s full on. Period.

“I did most of the sparring, his number one guy. People would pat me on the back when it was just me and him sparring – probably because they didn’t have to spar him – they just got paid and were just living for the experience. I didn’t complain because I was getting all the experience and I would’ve gone to his camp for free.

“I even had my birthday over there and that day they made me a cake and everything.

“He did say in his press conference with Mariusz Wach – when he was speaking in German – I was the strongest, fastest and the best sparring partner he had in that camp. That meant a lot to me too.”

Putting ‘Big Baby’ in his place

Jarrell ‘Big Baby’ Miller was left frustrated and humiliated after Klitschko did not appreciate his conduct in a sparring session.

“When you spar the champ and you do something good in sparring, you’re set up for other fights, maybe even with him.

“So some heavyweights tried to knock his head off!

“Jarrell gave him some heat and Wladimir gave it back.

“Wladimir gave it back to them in the ring, then wouldn’t use them for a week.

“Wladimir was the man, it was his camp, so he would say: ‘I’m not using you for a week’. 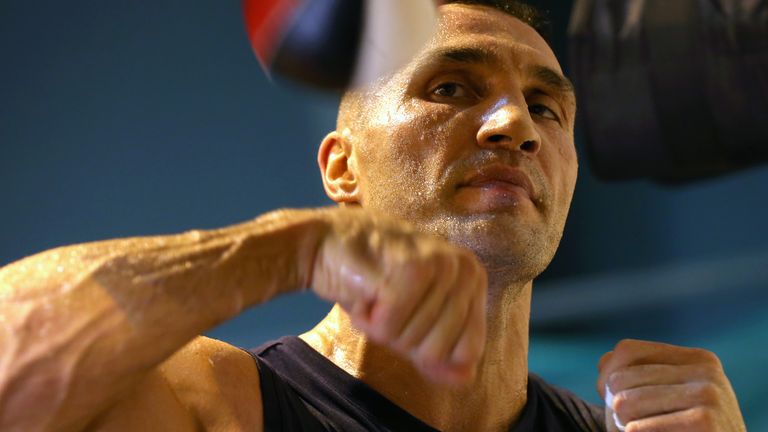 “It was a control thing from Wladimir. He wanted people to box with speed, someone to pressure him, not someone to try and knock his teeth out. Then tomorrow he would spar with a real heavy-hitting Jarrell who was trying to knock him out. But not every day.

“That was an issue with Jarrell.

“Jarrell was saying: ‘He won’t spar me anymore’.

“Jarrell: ‘Because I was trying to take his head off!’

“I talked to Wladimir who said: ‘I don’t need that type of work, all day every day’.

“I was in my third camp with Wladimir because he loved the boxing I was doing. Before he fought David Haye, I did the most rounds with Wladimir out of any sparring partner.

“In training you don’t want to go to war every day. That’s how fighters get damaged.”

The challenger who gave away his secrets

Eddie Chambers was a sparring partner in 2006 before Klitschko beat Calvin Brock. Four years later Chambers earned his own shot at Klitschko but was knocked out. He believes he gave away his in-ring secrets to Klitschko during their sparring rounds.

“It was a mistake to do that,” Chambers told Sky Sports.

“He saw what I could do, but he also felt some things that were a little like ‘wow’.

“A smart veteran. Any fighter of that level of magnitude, he’s going to look for every edge, any chance he can find. I kind of learned that from him, and from James Ali Bashir [one of Klitschko’s training team]. 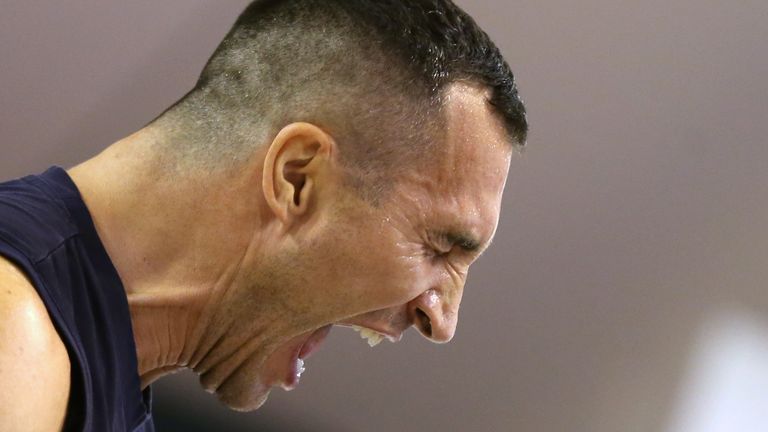 “He would bring in guys that he could actually get a good look at. Not just ‘hey, I need good sparring’ but ‘I want to challenge myself but I also want to see who I might be up against as time progresses’.

“It’s a genius move, and he had the opportunity to see me early on.

“I remember sparring and at times we would spar, kind of in-house with the other guys. Wladimir would maybe watch.

“Spare no expense to do everything possible. To not only make even the challenger feel somewhat uncomfortable, but just get as much fanfare involved in the fight as possible.

“To really show the class of what he represented, to be in the ring with him, I was excited to be a part of it, and I was more excited to feel like I was going to actually take over that situation. As it stood, he was well prepared, I was well prepared, but he was just a little bit better in that department.”

Awkwardness with Fury in the sauna

Tyson Fury revealed the now-notorious sauna tale to Klitschko’s face in the build-up to their fight. Fury had been in Klitschko’s camp years earlier and, he claims, went home with a psychological boost.

“It gets down to him and I’m over the other side. I’ve only had 12 or 13 fights, but still, in my mind I was mentally in a competition with him.

“He can say what he wants, he can deny it, whatever.

“I was prepared to die in that sauna before I got out. I stayed in for like 40 minutes.

“He got out first. I thought, ‘Mental victory.'”

A confrontation between Joshua and Whyte

Anthony Joshua and Dillian Whyte, then just young rivals who had fought in the amateurs, were both at Klitschko’s camp together and inevitably butted heads.

“I wanted to punch Joshua up, at first, because he was talking a lot of smack,” Whyte told Sky Sports.

“There was genuine annoyance there. Bashir Ali and a couple of guys stopped me getting at him and then it sort of got squashed. It was a bit edgy.”

Whyte said about Klitschko: “He was friendly with the likes of Joshua

“They are very similar in their mindset and their behaviour. You know me, I was just a bit of a street thug then. I was just thinking, I’m not getting knocked out.”

Whyte remembered another Brit not faring so well: “He broke Sam Sexton’s nose! I said ‘nah, you’re not knocking me out, I’m coming’.

“I went in there and started roughing him up and having a proper fight with him. I got sent home for that.”

‘Bloody and emotional’ with brother Vitali

The Klitschko brothers famously never met in the ring and would not be amused at suggestions that they should. But Wladimir and Vitali would spar.

Wladimir told CNN: “We are very competitive. It’s something we have in our blood. Each of us want to show the other that he can do things better. But on the other hand there is a lot of respect and love to each other. 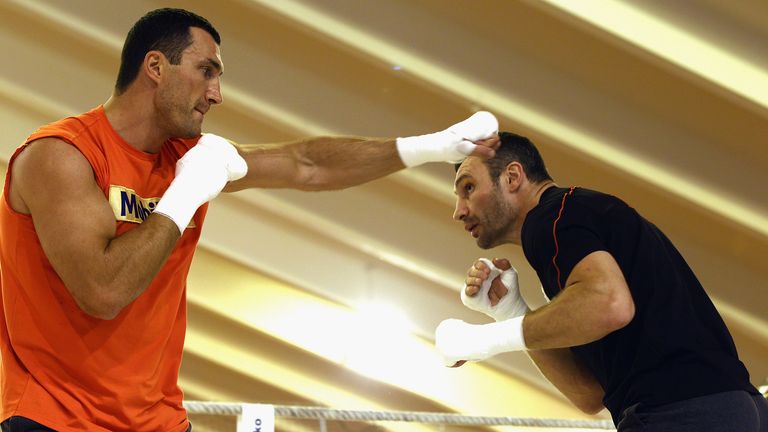 “We never competed against each other in any tournaments. We sparred with each other, and those sparring sessions were not fun. It was very bloody, emotional, and we just realised after getting injured, in another sparring session against your brother, we decided not to do that

“It’s something that we also promised our mother. She said you can box however you want, but promise me one thing, you will never fight each other in the ring.”

Croatia’s Filip Hrgovic made an impact when he passed through Klitschko’s training camp. Then a year later he cut David Haye in sparring, forcing the cancellation of his fight with Tyson Fury.

“He showed in the past, through his Olympic record and his professional record. I have been sparring with him and he was really, really tough, even in my best days back then.

“I think he is going to become a champion, absolutely. Does he have a chance? Absolutely, yes.”

Hrgovic said: “I was with Klitschko just before the Olympic Games, and his coach Johnathon Banks and Wladimir as well, were 100 per cent sure that I will become an Olympic champion.

“But I didn’t. I lost in the semi-final. They gave me a lot of good words and that gave me confidence. Everywhere I came, I got good words.”

Klitschko had been riled by the trash talk of his upcoming opponent David Haye.

“I knew when I sparred,” Michael Hunter told Sky Sports.

“He was obviously a veteran and could go 12 rounds, I was an amateur when I was sparring with him. 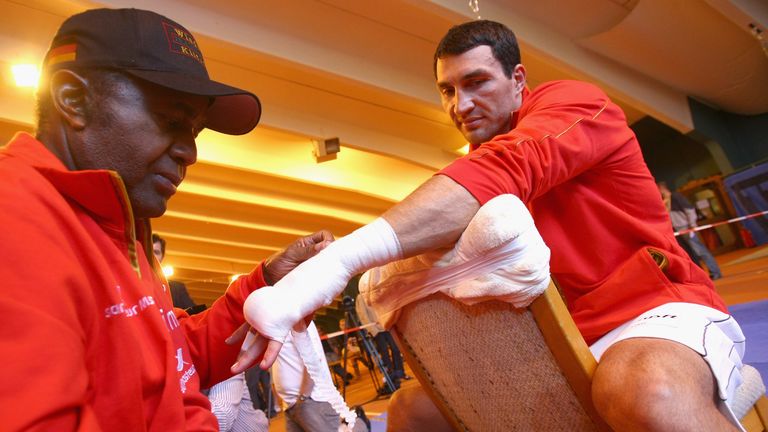 “When he was with Emanuel Steward, and he had him right where he needed to be, he was a very, very hard person to deal with. And just getting hit. You couldn’t even get hit on the body with his punches to a certain extent.

“I just knew once they put on those 10-ounce gloves, that Haye had no other choice but to kind of run around.”