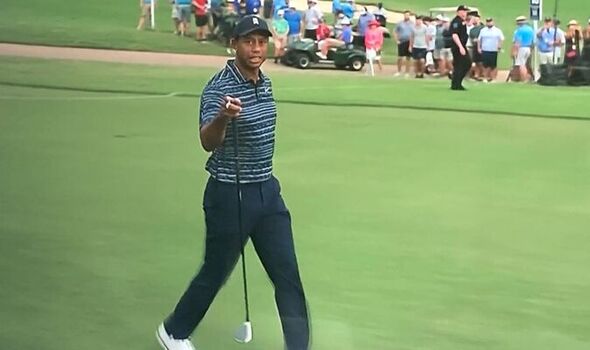 Tiger Woods was involved in a heated exchange with the cameras moments after his first tee shot at the PGA Championship. All eyes were once again on Woods heading into Southern Hills for the second major of 2022.

He made his comeback at The Masters last month, 14 months after the horrific car crash which nearly cost him his right leg. The American golf icon surprised many by not only playing at Augusta, but making it through to the weekend before he tailed off.

A month on from The Masters and Woods feels “stronger” heading into the PGA Championship. Southern Hills was the scene of his last PGA Championship win back in 2007, but the course is still a tricky walk for somebody still recovering from his bout of injuries.

He has noticeably still been walking with a limp, often using his club as a walking stick, during the practice rounds. But there is still nothing wrong with his swing after he struck his opening drive in the first round on the 10th tee straight down the middle of the fairway.

“You mind giving me some breathing space please,” Woods said.

The 15-time major champion then repeated the remark to the media in tow before waving his arms in disbelief and becoming more angry.

“Back off a little bit and give me some more breathing space,” he said.

Woods eventually shrugged off the exchange before approaching his ball down the fairway. And he showed his short game hasn’t escaped him with a brilliant chip to birdie range before putting it away to move one-under par.

Woods has been paired with Jordan Spieth and Rory McIlroy for the opening two rounds. Spieth has a chance to become just the sixth person in history to win the career Grand Slam.