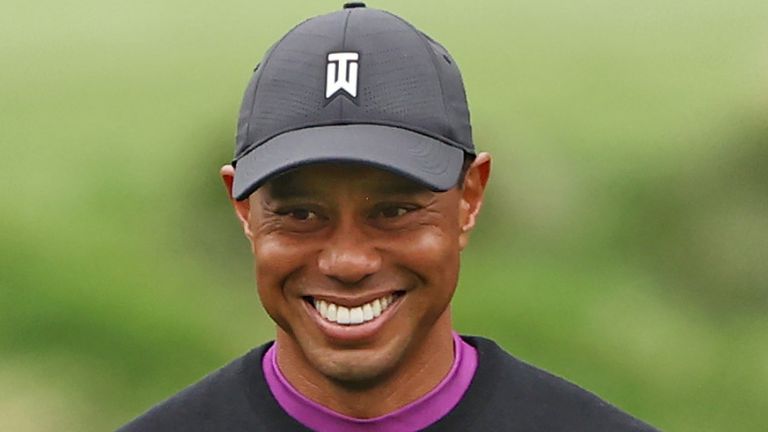 Justin Thomas has enjoyed a few duels with Tiger Woods during his career, but it is 11-year-old Charlie Woods who he expects to bring the competitive fire this weekend.

Team Woods are making their first appearance at the PNC Championship, a relaxed end-of-season event in Florida with the field restricted to major champions playing with a family member of their choosing.

Woods opted for his young son Charlie, who captured the attention of social media when the pair were warming up on the practice range on Thursday, with a swing that made it clear he had inherited much of his father’s natural talent.

Thomas, playing with his father, Mike, will be grouped with the Woods’ on Saturday, and he is looking forward to the challenge of taking on young Charlie.

How was your swing when you were 11? 😳 pic.twitter.com/vDhphUrudG

“For some reason, Charlie just always wants to beat me, it doesn’t matter what it is,” said Thomas. “Although he’s never beaten me in golf or a putting contest, he still talks trash just like his dad. It will be fun. We’ll have that like inner tournament within a tournament, trying to shut his little mouth up, but it will be fun.

“They are very similar. Who wouldn’t want to be like your dad if your dad was Tiger Woods? He definitely has all the mannerisms.”

Woods senior played “a lot of golf” with his son during the coronavirus shutdown and enjoyed helping Charlie hone his skills on the course, skills that were abundantly evident on the range at the Ritz-Carlton Golf Club in Orlando.

“Because everything was shut down, the only thing that was available to us was golf,” Woods said. “He started to pick up golf, but this pandemic allowed us to play more golf and be with one another.

“And we just started playing a lot, and he started getting the bug for it, and so did I. It kept me competitive, kept me in it when we didn’t have any tournaments. But I had a tournament every day with him, and that was the fun part. It was just like me growing up with my dad.”

“All kids mimic, and I don’t know if his swing is any different than mine. His feels are similar, hitting shots and reading those shots. And, of course, he is competitive, yes. Our whole family is that way. Chirping, that’s what we do.”

Mike Thomas, meanwhile, was impressed with what he saw of Woods Jnr on the range, and having coached Justin to a major championship and the world No 1 ranking, he knows a thing or two about what makes a good swing.

“His speed is impressive,” said Mike Thomas. “He has some incredible speed and it’s not just that he’s 11, he’s a small 11. What impresses me is his knowledge. I get he’s Tiger’s son but still, he sees fades and sees draws. He just sees things out there.

“You don’t teach something like that, you just develop that. Justin was like that. He talked the language at a young age.”