Morgan takes the Australian PGA and shatters the records of greats

The Joe Kirkwood Cup was all but secured after three rounds when the Royal Queensland member, who plays off a handicap of plus-six around his home layout, led by nine strokes. All week it had been like Morgan had played a different course to his rivals. 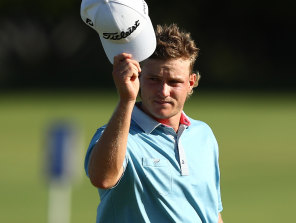 His big lead provided a mental challenge – Morgan said the final round wasn’t like any he had experienced on his home track, a layout on which he also won the Australian Amateur title two years ago.

The 22-year-old became the youngest winner of the Australian PGA in the strokeplay era, taking that honour from Englishman David Howell, who won as a 23-year-old in 1998, while Ballesteros and Australian No.1 Cameron Smith won the tournament as 24-year-olds.

Morgan opened his winning margin up to 11 strokes from Andrew Dodt, with a final-round two-under par 69, to break the tournament record held by three-time US Open winner Irwin and Norman.

“I wasn’t playing with any names in the back of my head. I think the best thing I did this week was just be myself on the golf course for the first time in a long time,” Morgan said.

“It was at home, and I was able to do it in a manner which was pretty exciting for other people as well. I can’t wait to do it many more times.”

The interest surrounded whether he would break the scoring record of Nick O’Hern and Peter Lonard from 2006 right up to the final putt. Morgan had to settle for par on the 18th to equal that mark.

The win guarantees Morgan will win the Australasian golf order of merit, which will give him a European tour card for 2022-23.

“I would have never imagined this was going to happen, even last night. I have been feeling sick for like three days, especially, after leading after two rounds. I just tried to press as hard as I could and just kept pressing.

“[To be honest] I just wanted to make the cut this week. I know that is a low goal to shoot at, but the reality was I felt pressure on myself, especially being a member around here.”

He dealt with that pressure superbly for the final 18 holes to etch his name on the trophy alongside numerous major winners.

Meanwhile, Su Oh took out the inaugural Karrie Webb Cup wining the Australian WPGA by four shots from 21-year-old Sydneysider Grace Kim. The final winning margin was comfortable but for much of the afternoon, Kim threatened to take her first professional tournament win.

It was the short par-four 13th, which proved the difference – Kim had a double-bogey six after missing the tabletop green and then chipped back over the green. Oh would miss the same green to the left with her approach but drained her putt from off the green to establish a winning advantage.