Cleveland Indians pitcher Zach Plesac took to social media Thursday to "get out the truth" about the incident last week that landed him and teammate Mike Clevinger on MLB's Restricted List.

In a video posted to Instagram, Plesac criticized the news media for doing "some evil things," five days after the team sent him home for breaking curfew during a weekend road trip in Chicago.

"Truthfully, I'm disgusted with the way the media has handled this whole situation surrounding our team," Plesac said on the video he recorded while driving a car. In it, Plesac admitted going out to dinner with friends after his start on Saturday and coming back to the team hotel late, but insisted he was following CDC rules the whole time.

"The media's portraying me and my best friend and teammate to be malicious with our actions when we were really … practicing safe practices," Plesac said.

Corona virus is REAL. Moving forward, it is our job to practice certain safety guidelines without letting it affect our quality of life. 🤍🙏🏼

The Indians told Plesac to quarantine and sent him home via a car service so he would not be on the team plane. He and Clevinger won't be allowed to rejoin the team until they have two negative coronavirus tests. 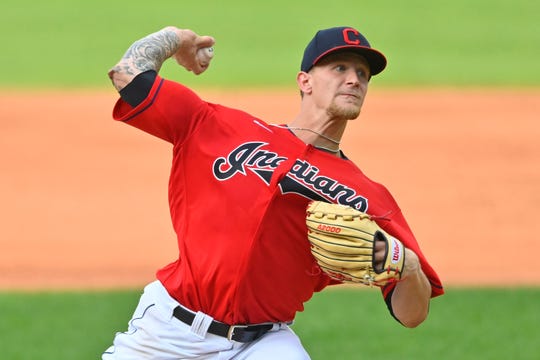 Indians pitcher Zach Plesac has a 1.29 ERA in three starts this season, but will have his next start pushed back after being placed on the Restricted List. (Photo: David Richard, USA TODAY Sports)

Plesac and Clevinger apologized in statements released by the team, but that hasn't stopped the criticism – from the media or his teammates.

"They hurt us bad,” said pitcher Adam Plutko, one of the team's representatives to the MLB Players’ Association. “They lied to us. They sat here in front of you guys and publicly said things that they didn’t follow through on.”

Still, Plesac insisted he would never do anything to put anyone at risk, something he said the media didn't emphasize.

"We've clearly been exposed as being bad teammates, bad people and dragged across the mud," he said, "so it's hard to sit here and watch how things shuffle out and people not knowing the truth."