It's already the best rivalry in baseball. The question is … what can the Los Angeles Dodgers and San Diego Padres do for an encore?

Whatever it is, it'll have to be something incredible to top the ending of Saturday night's game in San Diego, which the Dodgers won 2-0 behind seven strong innings from Clayton Kershaw.

The Padres had a golden opportunity in the bottom of the ninth inning against left-hander Victor Gonzalez, with two outs and the tying runs in scoring position. San Diego's Tommy Pham lined a Gonzalez fastball to the gap in right-center field, but the Dodgers' Mookie Betts made an all-out dive and just barely managed to corral the ball in the palm of his glove for the final out.

Mookie Betts saves the day for the Dodgers! pic.twitter.com/lNkcfFYVis

It was as spectacular a game-ending catch as you'll ever see. But baseball fans have come to expect the spectacular from Betts, who has won five consecutive Gold Gloves for his fielding excellence.

"It takes an elite defender in center to make that play," Dodgers manager Dave Roberts said after the game. "A lot of things have to line up. There's just a handful of guys that could've probably made that play. That's why he's arguably the best all-around player in baseball."

This catch may have been one of his best. According to Statcast, Betts covered the 52 feet needed to make the play in just 3.3 seconds. The catch probability? 10%. 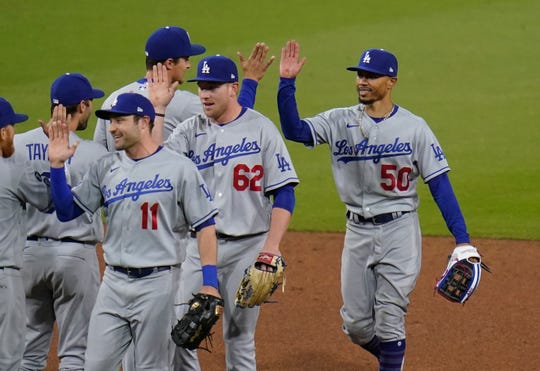 Whether it's by eye test or by the numbers, Betts was equally incredible Saturday night.

Who knows what Sunday may have in store.