What happened to the flags?

Through five weeks of this most unusual, pandemic-wrapped season, the points (3,958) and touchdowns (453) in the NFL have piled up like never before. During the same stretch the rate of penalties across the league has nosedived to their lowest levels in at least five years, according to the league.

Of course, there’s a correlation.

Football purists, hold your breath. These high-scoring, AFL-centric shootouts are exactly what the NFL still wants more of for its product.

Troy Vincent, the NFL’s executive vice president for football operations, didn’t mince words this week when he mentioned a reduction in penalties, along with an increase in total plays and pass attempts as the three components to drive “fandom” (his word, not mine) for the league.

“Add those together and they equal points,” he said. “And that really generates an exciting game.”

SUPPORT: Browns rally around Myles Garrett in his first Steelers game since altercation 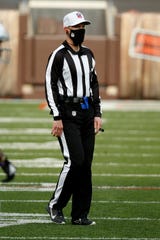 NFL officials have been able to stand like this more often this year than throw penalty flags. (Photo: Kirk Irwin, AP)

Vincent, remember, played 15 NFL seasons as a defensive back paid to stop opponents from scoring. Deep down, he surely appreciates a good shutout. But the appeal of the product prefers final scores of 48-45 or 44-38 to 10-3 or 13-7.

Chew on the penalty and scoring numbers, and it’s clear and obvious: The fix is working with fewer flags. That fix, mind you, in the sense of correcting the over-officiating over the past couple decades that tended to put a drag on the flow of the games and too often fueled controversy.

Now, coinciding with the NFL revamping the leadership of the officiating department — Walt Anderson and Perry Fewell joined Al Riveron and assumed significant slices of his workload and authority —  there’s more of a “let ‘em play” environment with officials instructed to use a “clear and obvious” standard for throwing penalty flags.

Clear and obvious? One person’s clear isn’t necessarily obvious to the next. Just the definition of that can be questioned. It’s still a judgment call.

“I like it,” Mike Pereira, the Fox Sports rules analyst and former NFL director of officiating, told USA TODAY Sports. “I think the game, over the past 20 years, was over-officiated. I’d rather see it under-officiated than over-officiated.”

The most significant indicator is found with holding penalties. Though five weeks, 156 holding penalties have been called – a precipitous drop from the 351 infractions flagged at this point last season.

Maybe much hasn’t changed with the age-old contention that you can call a holding penalty on every snap, but that’s exactly what’s not happening.

“You can’t think they’re not holding anymore,” Pereira said. “Some would say they are just as much as in the past.”

With the holding infractions minimized, drives can be kept alive and long-yardage situations reduced … which leads to points.

Chalk up another advantage for the offense. That’s hardly a fresh idea. The rules have continually slanted in favor of the offense since the mid-70s. Yet some will contend that it’s become so blatant in the trenches that the injury risk for defensive players has risen exponentially.

“They are letting them get away with everything,” one NFL coach told USA TODAY Sports under the condition of anonymity. The person did not want to be identified for fear of reprisal. “The holding is outrageous.”

That’s an added edge for mediocre offensive linemen, offenses that employ zone-rushing schemes and for quarterbacks who extend plays.

Pereira, though, contends that there’s another reason for the patterns.

“Who would have thought the pandemic would affect holding calls?” Pereira asked.

Pereira suspects that overall the roster of officials, with seven new members, was not as prepared as usual. The on-field work that officials typically get with an offseason clinic, training camp practices and preseason games, didn’t happen this year because of the pandemic. The training came via teleconferences.

Consistency is not the ticket. Blown calls and the potential for mood-altering controversies still lurk as the scoreboards light up. But you reap what you sow. Penalties are down, and points are up. Just as the NFL intended.