British Grand Prix: Silverstone and F1 will decide whether race can go ahead by the end of April 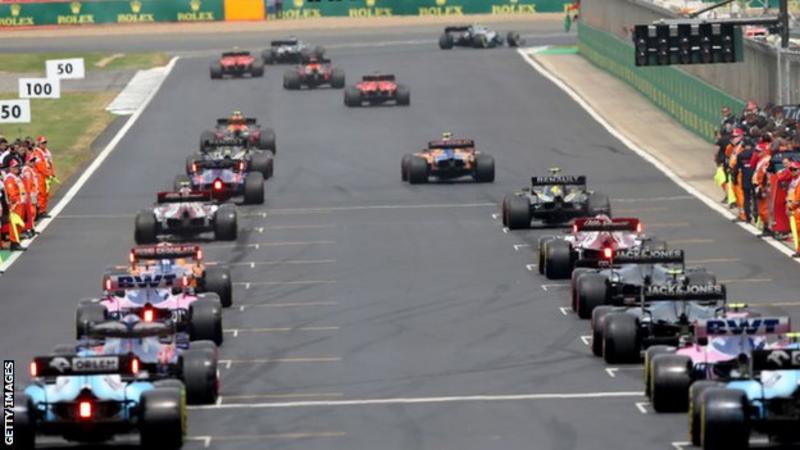 Silverstone and Formula 1 say they have until the end of April to decide whether the British Grand Prix can be held as planned on 17-19 July.

The global coronavirus crisis has already forced the first eight F1 races of the season to be called off.

Silverstone is among the next group under threat.

A joint statement said Silverstone and F1 were “in close dialogue” on the feasibility of going ahead on the original date.

It comes as Wimbledon is widely expected to call off its tennis grand slam in July.

The British Grand Prix statement said: “We fully appreciate that other UK sporting events in July have taken decisions regarding their events, but it is important to highlight that their logistics and sporting arrangements differ from Silverstone’s.

“Therefore, our timeline gives us until the end of April to make a final decision. The safety of our fans, colleagues and the F1 community will be our priority and we will continue to engage with the appropriate authorities.”

The season-opening Australian Grand Prix was called off on the Friday of the race weekend last month with all the teams in situ in Melbourne after a McLaren employee tested positive for coronavirus.

The postponement of the following Bahrain and Vietnamese Grands Prix came later that day, to bring an end to the first four long-haul races after the Chinese race was the first to be postponed in February.

Since then, the Dutch, Spanish, Monaco and Azerbaijan Grands Prix have also been called off.

Only Monaco has been cancelled; all the others hope to reclaim dates in a revamped schedule later in the year once racing can start again following the lifting of travel restrictions.

The next event under threat is the Canadian Grand Prix on 14 June, and Montreal organisers have said they have until just after Easter weekend (10-12 April) before they have to make a decision.

It seems inevitable, given the escalating health crisis around the world, that Canada’s race will join the others in being postponed.

The next races are then scheduled for France on 28 June, Austria on 5 July and then Britain on 19 July.

F1 chief executive Chase Carey has said he hopes to restart the season in the summer and hold somewhere between 15-18 races.

Teams have waived their rights to consultation on the calendar and it has been agreed that the 2020 season could run into January next year if that is required.

A season has to have at least eight races for it to be counted as a World Championship.