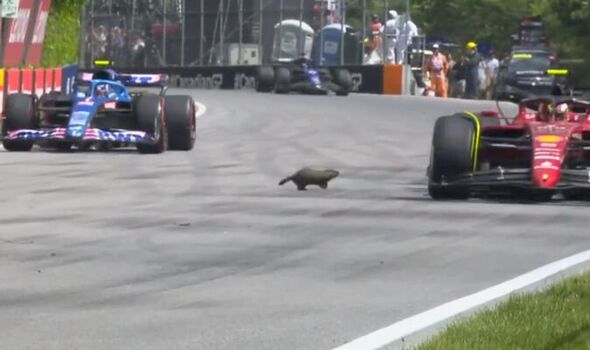 F1’s Canadian Grand Prix almost took a dark turn after a groundhog came close to being run over in FP1. The groundhog was seen running across the track between turns two and three during the first practice session.

Esteban Ocon had already slowed down as the groundhog made his escape, but he came very close to being hit by Carlos Sainz’s Ferrari, who came through unsighted. The groundhog can be seen getting very close to Sainz’s front right tyre when riding onboard with the Spaniard.

Alex Albon was also forced to swerve to the left to dodge the animal as it crossed the track. Groundhogs are a notorious problem at the Canadian Grand Prix, with several near misses over the past decade.

Felipe Massa was forced to dodge one between turns seven and eight during the 2015 race. Lewis Hamilton spotted one running on the inside of turn two in 2017, while Kimi Raikkonen took to team radio to warn of a groundhog incident in 2019.

He said: “There’s that animal running around the track before turn six on the middle of the track.” Unfortunately, Romain Grosjean did hit one at the 2018 Canadian Grand Prix, damaging his wing in the process.

After the race, Grosjean appeared furious at his random retirement, suggesting the marshalls should have done more to catch the animal. He said: “It’s a bit disappointing because they showed it on TV before the beginning of the session at Turn 13.

“And that’s exactly where I hit it. I’m surprised they didn’t move it. It’s a shame for the animal, of course, it’s a shame for our front wing as well.

Former FIA race director Charlie Whiting addressed the issue, revealing the groundhogs were protected on the island where the race is held. He said: “Of course, we saw the groundhog. I did ask if it was feasible to try and catch him and I was told by those who know much more about groundhogs it was a very unwise thing to try and do.

“We felt that on balance it was better to leave it there and hope he didn’t make a dash for it but he did, unfortunately. They are indigenous to this island, they’re protected, and they do their best to get places they’re not supposed to go.”