Grosjean, who had qualified in pole position after Friday’s qualifying session, dominated proceedings for long spells at the Indianapolis Motor Speedway’s road course, but ended up losing out to Dutch racer Rinus Veekay for the race win.

Grosjean’s first season as an IndyCar racer started in less than spectacular fashion as he could only manage a 10th-place finish in the opening race of the season, while his second outing saw him struggle to only finish 13th.

The Frenchman then gave way to team-mate Pietro Fittipaldi, who took over the Dale Coyne Racing Honda for the double-header at the 230mph oval at the Texas Motor Speedway.

But in his third race weekend, Grosjean showed his class as he stunned the field at Indianapolis to pip two-time IndyCar champion Josef Newgarden and claim pole position during Friday’s qualifying session.

While Grosjean may have demonstrated his pace over one flying lap, there were still question marks over his IndyCar racecraft and his ability to carry both pace and reliability through the 85-lap race distance. 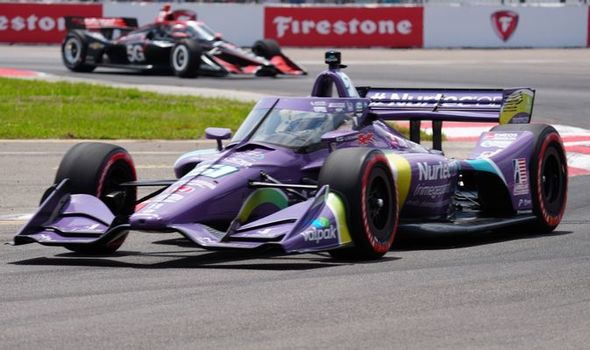 But the Frenchman answered the doubters with a blistering start, as he left the field in his wake from the rolling start – a departure from the standing starts he was previously used to in F1.

Grosjean quickly pulled out a lead on the softer compound tyres, and extended his advantage to five seconds before a hassle-free first pitstop.

He emerged from his stop with a diminished advantage after British rival Jack Harvey undercut the Frenchman and closed the gap to just two seconds.

But, after taking a few laps to get his second set of red soft compound tyres up to race temperature, Grosjean found his pace again and extended the gap once again.

Grosjean’s four-second gap then became a seven-and-a-half second advantage when Harvey suffered a slow pitstop, which then led to a right rear puncture that ended his challenge.

A new challenge emerged as Dutch racer Veekay, on warmed-up soft-compound tyres, took advantage of a slow pitstop from Grosjean’s team and passed the Frenchman, who was now on the slower, harder-compound black tyres.

But Grosjean, racing the circuit on the hard compound rubber for the first time in the race, struggled to keep pace with Veekay’s pace, and found himself needing to play catch-up with the Dutchman when the final round of pitstops arrived.

After pitting for his final set of soft-compound tyres, Grosjean found himself almost seven seconds behind Veekay and needing to hunt down and pass the Dutchman to claim his maiden IndyCar victory.

Grosjean was unable to bridge the gap, but drove strongly in his final stint to secure second place after a hugely encouraging performance across the full race distance that left him grinning from ear to ear on the podium, despite missing out on what would have been a memorable win.

“People have been very good to me,” he said.

“I’m very grateful for all of the support for me and my family.”

When asked about the best aspect of racing in the IndyCar championship, Grosjean’s answer was immediate.

“Leading laps,” he said, after leading 44 of them during the Indianapolis GP.

“I love driving the car. Even in the warm-up this morning, they said you can pit for some changes, and I said, ‘No, I’m not pitting.’ I was just happy to be out there and pushing and learning the car.”

Grosjean also said he has already fallen in love with the the more laid-back atmosphere in the IndyCar paddock, compared to the high-pressure, high-tension environment of F1.

“I’m having a great time. The atmosphere between the drivers is excellent. We’re joking and having fun,” he said.

“It is super competitive on the track but as soon as you remove your helmet, it’s like good friendship between the drivers, which, surprisingly, you don’t find anywhere else. I love that part.”