Daniel Ricciardo celebrates his first win as a McLaren driver

Lewis Hamilton and Max Verstappen crashed out of the Italian Grand Prix on Sunday – with the halo appearing to save Britain’s seven-time world champion from serious injury – before Daniel Ricciardo claimed McLaren’s first victory since 2012.

The Australian driver, who started second on the grid and overtook Verstappen on the opening lap, led home a one-two finish for the British team, with Lando Norris taking a career-best second.

Despite McLaren’s superb result, the afternoon at the Temple of Speed will be remembered for Hamilton’s collision with Verstappen.

After Hamilton left the pit lane on lap 26, Verstappen drew alongside his championship rival at the Variante del Rettifilo in Monza. Hamilton moved to his left to defend his position at the right-hander, with the Mercedes driver narrowly ahead for the ensuing left-hander. Verstappen ran out of room, and ran over the kerb which launched his Red Bull out of control and into Hamilton’s Mercedes.

The rear of the Dutchman’s airborne machine ran over the top of Hamilton’s helmet, with the protective halo device absorbing the impact. The front of Verstappen’s Red Bull was then beached in the gravel, and resting on Hamilton’s car.

A furious Verstappen said: “That is what happens when you don’t leave any room.” 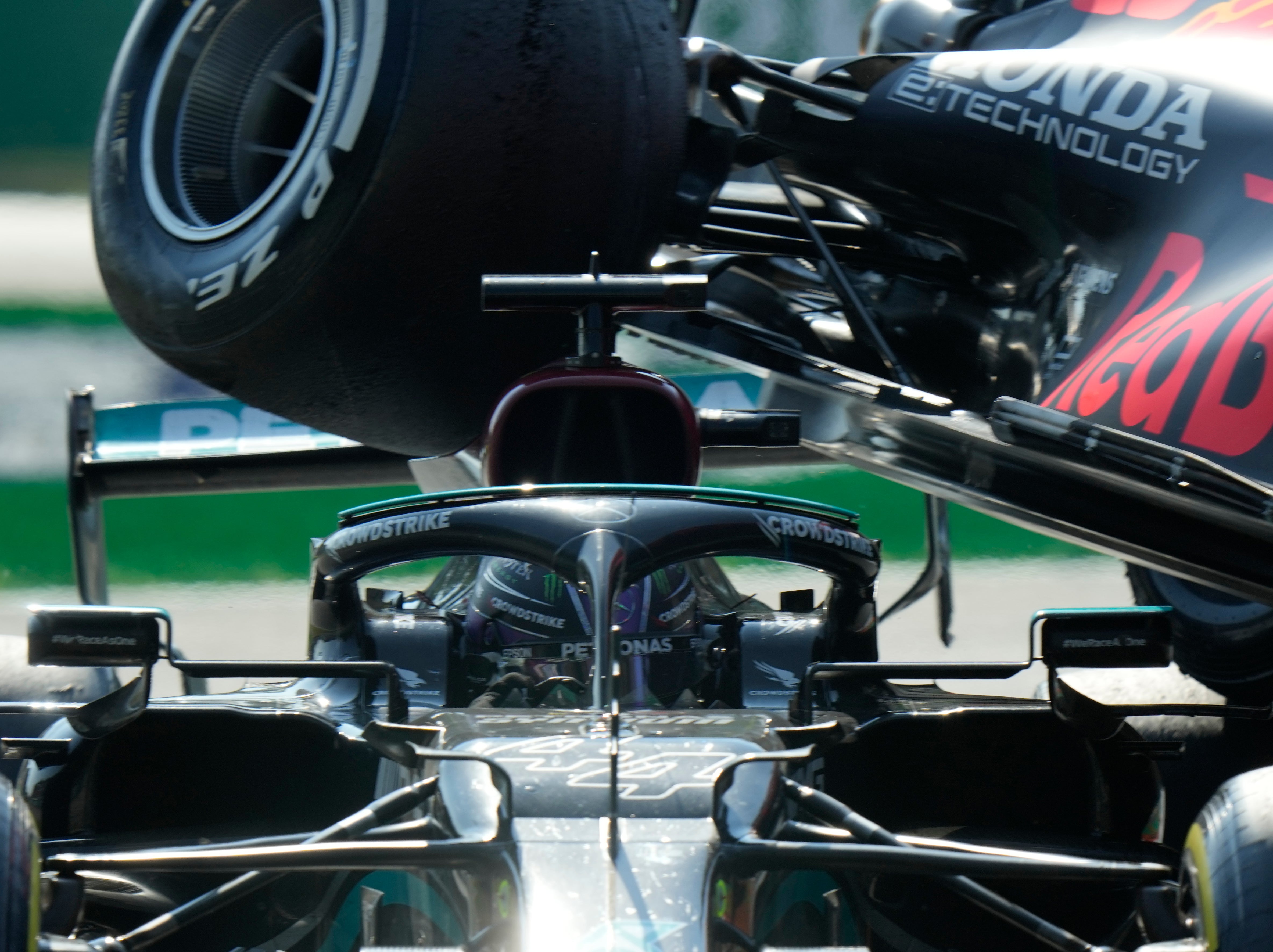 The Dutchman then jumped out of the cockpit and stormed away, without checking on Hamilton’s condition. One lap later, Hamilton eventually emerged from his car, appearing to be unharmed.

The two men walked back to the paddock with the stewards later investigating the coming-together – their second in five races following the opening-lap crash at July’s British Grand Prix.

Ricciardo started second, but took the lead after beating Verstappen in the 430-metre charge to the opening chicane.

Behind, Hamilton moved ahead of Norris and was within striking range of Verstappen as they approached the Variante Del Roggia.

Verstappen held the inside line and Hamilton diverted off track, running across the kerbs, and falling behind Norris.

“He pushed me wide,” the 36-year-old Englishman complained over the radio.

Ricciardo led from Verstappen, Norris and Hamilton, with the Australian the first to stop for fresh rubber on lap 22 of 53.

Verstappen stopped the next time around, but was stationary for 11 seconds following a problem putting on his right-front wheel. 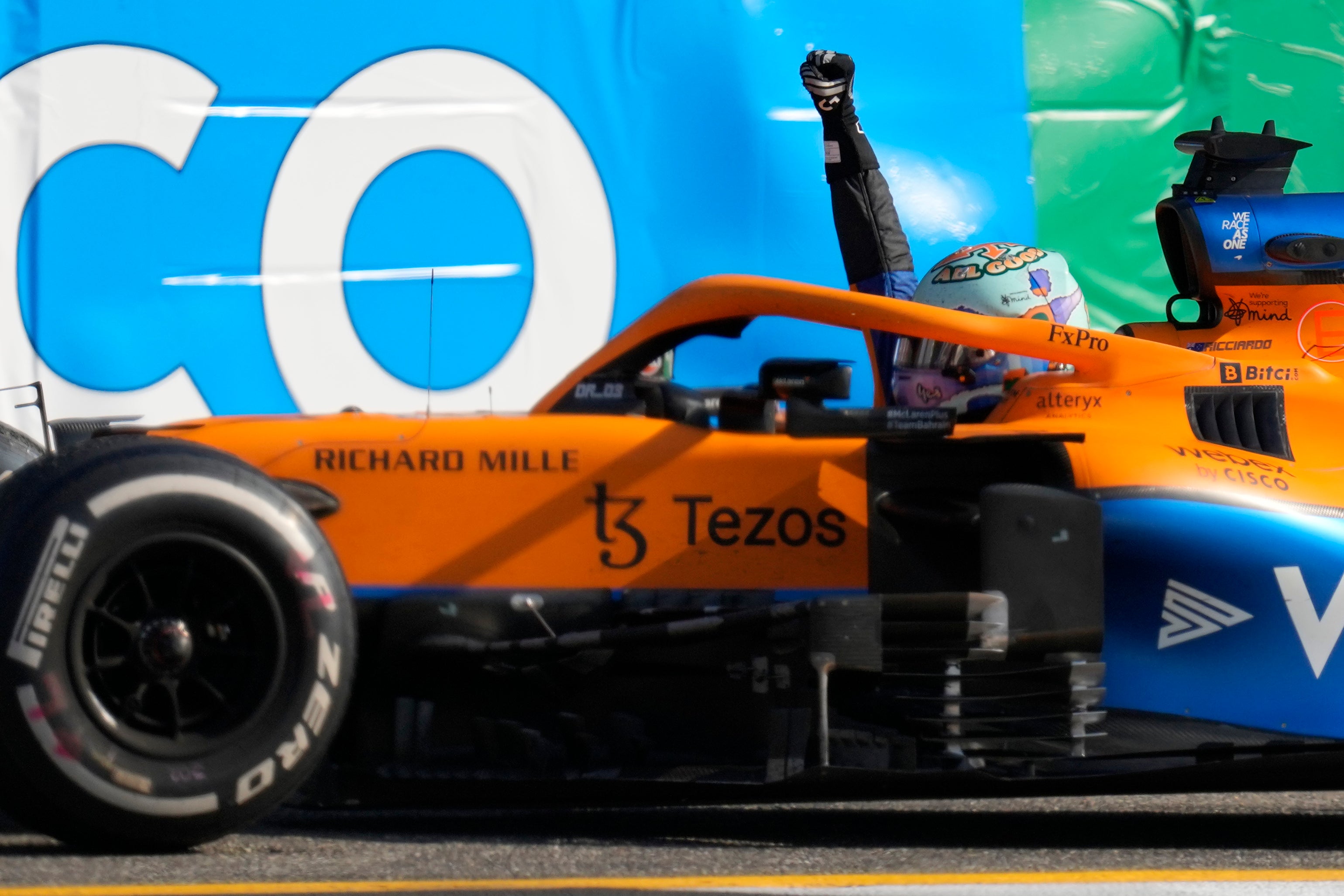 Norris pulled in on lap 24, with Hamilton in on lap 25, but the Briton’s stop was slow, and he emerged from the pits side by side with Verstappen.

The two then sensationally collided as they battled for a net-third.

The safety car was deployed for four laps with Ricciardo executing a perfect restart.

Norris had fallen behind Charles Leclerc, but delivered a gutsy move on the inside of the Curva Grande to move ahead of the Ferrari and secure a remarkable one-two finish for Britain’s most successful Formula One team.

The victory comes eight years, nine months and 18 days after Jenson Button won in Interlagos – Hamilton’s last race for McLaren before he moved to Mercedes.

“We have had an awesome weekend,” said Norris. “Four years ago, I joined this team and we have been working towards this. I am happy for Daniel and happy for the team.”

After claiming the eighth win of his career, his first since 2018, Ricciardo said: “Can I swear? About time [that I won].

“It was never a guarantee we would lead the whole race but I held firm in the first stint and to keep Max behind and then there was the safety car.

“To get a one-two for McLaren is insane. I am, for once, lost for words.”

Valtteri Bottas, who started from the back following an engine penalty, finished fourth but was promoted to third after Sergio Perez was hit with a five-second penalty for gaining an advantage in his tussle with Leclerc. Leclerc took fourth for Ferrari, with Perez fifth.