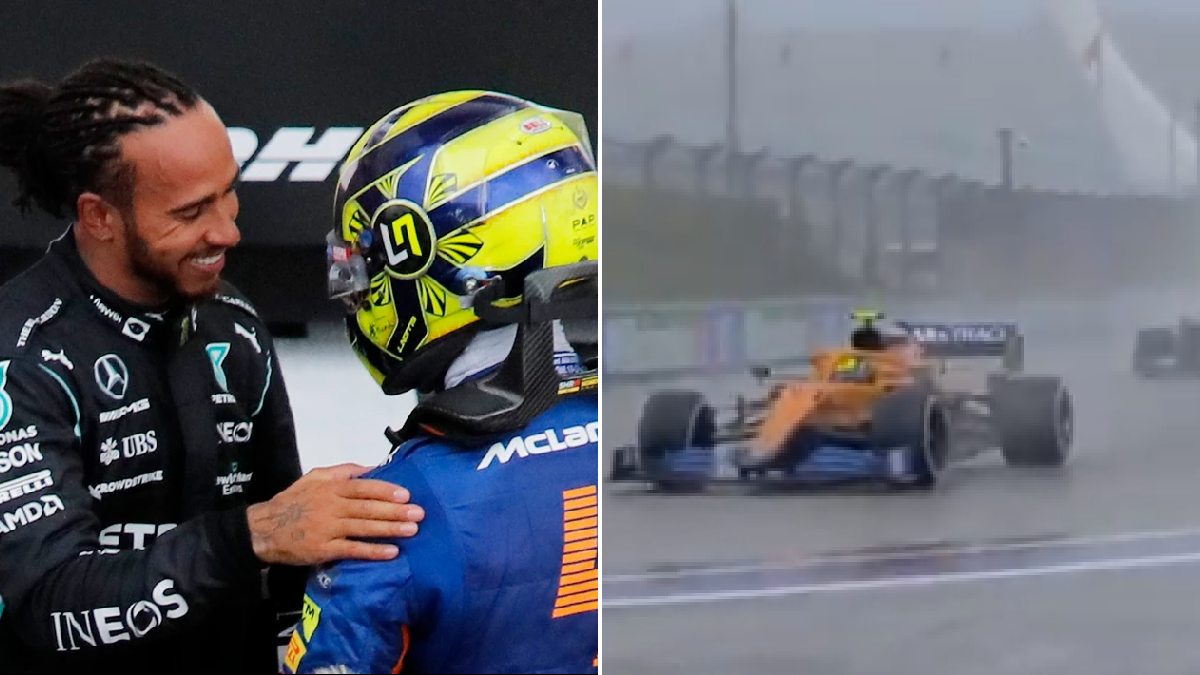 Lewis Hamilton has hailed Lando Norris after the McLaren driver was cruelly denied his first ever victory in Formula 1 when a late rain shower caused havoc at the Russian Grand Prix.

The younger Brit had led for much of the race and despite Hamilton closing the gap towards the end of the race, Norris was keeping him at bay and even laid down the fastest lap of the race.

But with five laps remaining, rain started to pour down on the Sochi track; initially it was only a light shower and affected a small segment of the course, but the situation quickly deteriorated.

While cars in the middle of the pack switched to intermediate tyres quickly – Max Verstappen benefited most, finishing second after starting the race in 20th – the front two initially stayed out.

After ignoring Mercedes’ first call to pit, Hamilton came in before Norris and it proved to be the perfect call, with the McLaren driver slipping and sliding down to eighth as the seven-time champion claimed his 100th Grand Prix victory.

Despite the huge milestone for Hamilton, he was keen to praise Norris after the race – even sharing a hug – and admitted he probably would not have caught his compatriot but for the rain.

‘Lando did such an amazing job, he had incredible pace,’ said Hamilton. ‘He’s doing such a great job for McLaren and it was obviously very bittersweet to see my old team ahead. They’re doing so well, obviously they won the last race.

‘Obviously the team made a great call right at the end. I didn’t want to let Lando go, and of course I didn’t know what the weather was doing.’

He continued: ‘It would have been tough to have got past Lando. He had great pace, he did the fastest lap.

‘So it would have been tough to get past him unless we got caught in traffic or he made a mistake – which he’s not been doing at all.

‘Then the rain came and it was very opportunistic and as I say, the team did an amazing job, so big, big thank you to them.

‘And otherwise there’s nothing I can do about who’s behind me. That’s a dream result for Max. But I’m grateful for the points.’