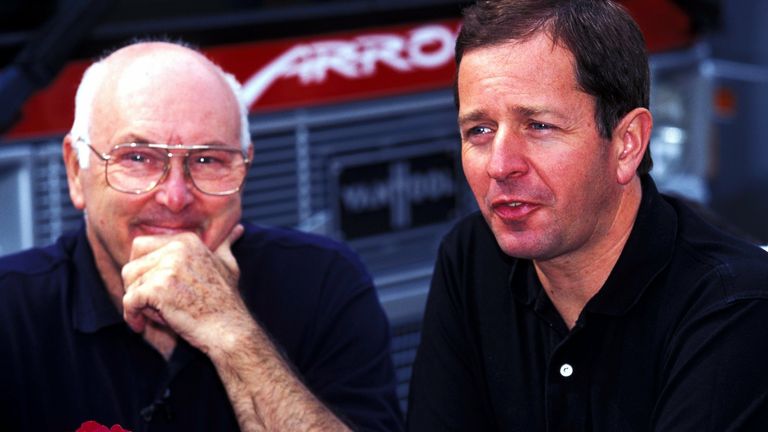 Walker, whose iconic voice was an essential backdrop to F1 for 25 years, passed away on Saturday at the age of 97.

So sad to hear of Murray’s passing. I remember growing up hearing your voice over the races. You made the sport so much more exciting and captivating. The iconic voice of our sport and a great man, thank you for all you did, you will never be forgotten. Rest in peace🙏🏾

“So sad to hear of Murray’s passing,” posted Hamilton on Twitter. “I remember growing up hearing your voice over the races. You made the sport so much more exciting and captivating.

“The iconic voice of our sport and a great man, thank you for all you did, you will never be forgotten.”

Sky Sports F1’s Martin Brundle also paid tribute to the late, great Murray, who he started his broadcasting career alongside.

“He was a wonderful character, always so full of life, full of fun and positive enthusiasm,” Brundle said, who started 158 Grands Prix before joining Walker in the commentary booth in 1997.

“We all loved him. In a high level sport, where you are universally loved and respected and regarded, I would think is quite unusual because that’s the sort of personality he was, he was so good at what he did.

“He had a passion for Formula 1 that is almost unsurpassed. The whole of our sport will be hugely saddened by this news.”

Walker was widely regarded as the Voice of F1.

Today we say farewell to one of the greats of our sport, Murray was the voice of F1 for so many years, he put his heart and soul into commentating. The legend will always live on in our memories but today in Murray’s words “I’ve got to stop because I have a lump in my throat” pic.twitter.com/Z10RcslkGk

“They broke the mould when Murray was born, there will never be another Murray Walker,” Brundle added. “I always say that learning to commentate on motorsport alongside Murray Walker for a number of years is like having Pele teaching you how to kick a ball, because he was so good at it, he was so diligent. He worked so hard.

“Farewell Murray, it was a total privilege to know you and in some way share part of your life and your enthusiasm.”

God's Speed Murray and thanks for so much. The Legend will never die. #Murray #F1 pic.twitter.com/s3HBqeoYLz

“Murray Walker inspired everyone in the motorsport community,” Croft said. “He was a man that ignited passion for sport and its storytelling like no other.

Rest in Peace Murray Walker, a gentleman and a legend in every sense of the word. It was an honour to know you, a delight to spend time in your company and inspiring to listen and learn from you. THE voice of Formula 1 and always will be. Thankyou xx

“Murray Walker was a inspiration to us all. He was truly the most gorgeous man to get to know, but the beauty of Murray was that we all felt that we knew him.

“He was a fan of life. A fan of happiness. And a huge fan of motorsport, the sport that just made him tick. He enjoyed every single minute in the paddock.

“He will always be the Voice of Formula 1.”

Ted Kravitz, speaking alongside Croft in Bahrain, said: “He was a complete master of his craft.

Like millions of fans, Murray Walker was a huge part of my childhood.

Despite growing up in India, I used to watch the races on VHS tapes months after the race & his iconic way of commentating got me excited about F1.

RIP Murray – you made the world a better place #Legend pic.twitter.com/GfMjV89Wuf

“It’s not an exaggeration to say Murray was Mr Formula 1. He brought the sport into our living rooms, we connected with him.

Tributes to Walker from around F1 – including teams & drivers

Our thoughts go out to his family and friends at this difficult time. We will miss you Murray and we can only sign off by drawing on one of his most legendary pieces of commentary…

And we've got to stop. Because we've got a lump in our throat 😢 pic.twitter.com/12x1zXjrOB

One of the legendary voices of @F1 has passed away. We are grateful to him for adding to the excitement of our battles on the track. pic.twitter.com/Qt2pHK8bmB

The voice of F1 and a true legend of our sport. His legacy will forever live on. Rest in peace, Murray. https://t.co/3fNedRQHLs

He was the voice of @F1 to millions and his love, passion and positivity for our sport were unmatched.

You will be truly missed, Murray Walker ❤️ pic.twitter.com/mXVDID6GdS

Tonight we pay tribute to the voice of F1, the legendary Murray Walker, who brought joy to so many of us.

Rest in peace, Murray. May you once again tussle for the mic with James Hunt. May your Murrayisms entertain all for ever more. pic.twitter.com/FjKyuOALV1

When we talk about legends in F1, Murray Walker is one of the few to earn the status outside of the cockpit. He was a master of his trade and will always be the voice of F1. Rest in peace, Murray. pic.twitter.com/CgeL0O8zUq

We are all very sad to hear that Murray Walker, the voice of motorsport, passed away earlier today. pic.twitter.com/QJSlILyyP4

A man who brought F1 to life, what a sad day for racing. RIP Murray Walker.

Rest in peace, Murray Walker. A true legend of F1. Thanks for making millions of fans love our sport. ❤️ pic.twitter.com/F5cEvuycm9

Incredibly sad news about Murray Walker. What an incredible life and generous person. He will be missed by anyone who loves sport.

The voice of our sport for so many years.

We’re deeply saddened to hear of the passing of the great Murray Walker.

God bless you Murray Walker. True icon of the sport. May your voice echo in our dreams for many years to come
#RIPmurraywalker 🙏🏼