4 Points: The game’s best players are hiding in plain sight

In the 2018 grand final Collingwood played undersized Tyson Goldsack and Tom Langdon as key defenders out of necessity. It nearly worked but in the end West Coast’s key strength exploited Collingwood’s weakness. 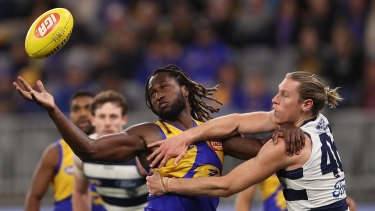 Top tap: Nic Naitanui gets the better of Geelong’s Mark Blicavs in a ruck contest during West Coast’s round 9 win at Optus Stadium.Credit:Getty Images

Throughout Naitanui kept his side in the game, and when the game had to be won he palmed the ball into the path of the surprise rover Josh Kennedy who snapped his fourth and most important goal to win the game.

It’s hard to be overlooked when no one can see over you, but ruckmen have been off the radar this year. And the league’s most eye-catching player has been hiding in plain sight.

Jake Niall was right in observing for his All Australian team that the quirk of the year is that it is not a year for midfielders, it has been a season of small forwards. But it is also the year of the ruck. 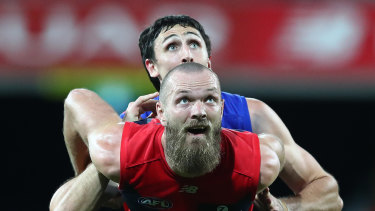 Eyes on the prize: Max Gawn gets front spot in a ruck contest against Oscar McInerney of the Lions.Credit:Getty Images

The choice of All-Australian ruckman typically picks himself or it comes down to a choice of two (see Gawn and Grundy in recent years). This year there are four with dibs on the position to the half-way point.

Max Gawn has been the most consistently influential ruckman, and to date would probably get the nod ahead of the field but he is let down by the question of how his supply of the ball to his midfielders translates to results. That might have something to do with Melbourne’s butchery of the ball, seldom converting first use into anything meaningful.

Todd Goldstein was outstanding again on Saturday. The All Australian five years ago is back in that sort of form. In fact he is a better player than 2015 because he is more influential around the ground than he was then. Always an elite palm ruck Goldstein has broadened his game with his follow-up work this year.

Jarrod Witts has been crucial to the Gold Coast’s improved form and young rucks like Tim English and Rohan Marshall won’t this year threaten for an All Australian blazer but they have shown that their best is of a calibre that will put them in contention for the award at some stage in their careers.

Brodie Grundy was having a good year until he played Nic Nat and was made to look like a novice. Grundy struggles against athletic rucks who can jump but ordinarily he compensates for that with work around the ground. He didn’t against the Eagles. Naitanui comprehensively beat him.

Naitanui’s tap work to hit in any direction on the clock face is of the highest order but his ability to also stay in the play and surge onto a loose ball at a centre clearance is a level above any of the other rucks.

SAINTS ON THE MARCH

St Kilda only beat the 16th side on the ladder. They only belted a side that would be thought of as a poor team except for, well, Adelaide. But there was a thoroughness about the way they did it, coming off the win over the top-of-the-ladder Port last week, that is constructing a stronger sense of substance about the Saints.

The side that twice this year gave up more than five goal leads to lose matches needed a run like this to affirm they had adjusted their game and found some ballast.

Adelaide's Matthew Nicks is nine games into his senior AFL coaching career without a win. Mark Neeld did the same at Melbourne, which will be of little comfort to Nicks. But so too did Damien Hardwick at Richmond and that worked out alright. Brett Ratten also lost his first nine games at Carlton in 2007.

All of those coaches won their 10th game. Adelaide plays Melbourne next and who knows what Melbourne side turns out?

The Crows were as insipid as a team has been in their loss to North Melbourne. Their inability to run, protect the corridor and defend was lamentable.

And that is the point of the size of the fine and whether indeed a fine was sufficient.

It was alarming that a club captain would be the next AFL person to transgress quarantine rules. It was more alarming still was that it was not just any senior coach but the coach of a team that had just lost his vice-captain for a month for breaking covid rules. (Though to our knowledge unlike Sidebottom, Buckley and Sanderson were dressed at all times and had not drunk more whiskey than a highlands caber tosser.)

Buckley’s transgression was not made easier to absolve when his own president had already suggested the next quarantine offender should be sent home.

Once more McGuire’s inflammatory comments immediately came to be turned back on him and his club. Once more his comments have compounded the self-inflicted problems his club was already facing.