After making a big statement at selection North Melbourne have snapped a six-game losing streak to keep Adelaide anchored at the bottom of the ladder without a win after nine rounds.

Inspired by the return of Majak Daw the Kangaroos kicked the first four goals of the game and then the final three goals before half-time to open up a match-winning 34-point lead at the long break. They eventually won by 69 points and recorded the biggest score of any team in 2020. 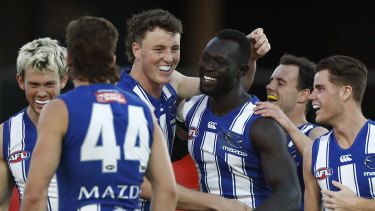 They had 11 different goalkickers as they piled on 19 goals without key forward Ben Brown, who was dropped after a poor start to the season, and playmaker Jared Polec, who paid the price for not fulfilling his role.

After starting forward Daw had his first kick midway through the first quarter when he moved into the ruck before he began to have an influence in the air in the second quarter. His crowning moment however came when he kicked a goal early in the last quarter and his teammates surrounded him in an emotional display of support.

It was a joyful moment as the Kangaroos were in control having resisted a mini-fightback from Adelaide in the second term to kick five unanswered goals either side of half-time.

During that period Adelaide – who lost key forward Taylor Walker to illness before the game – were insipid defensively allowing the Kangaroos to change angles and take uncontested marks with ease. The Crows' forward pressure was non-existent with Luke McDonald rebounding easily off half back while the Kangaroos midfield dominated the clearances.

The Crows were disorganised and a pale imitation of the team that made the 2017 grand final playing without the spirit that has defined the club for much of their time in the competition. Rookie coach Matthew Nicks would be entitled to expect better from his senior players.

But the day was one North Melbourne was entitled to celebrate with Daw's return outstanding and the response to the coach's tough calls emphatic with Luke Davies-Uniacke and Jed Anderson showing good signs in the midfield while first-year player Jack Mahony kicked the first goal of his career.

It was a great response to the coach's call with ruckman veteran pair Todd Goldstein and Shaun Higgins leading the way with Goldstein dominating the centre square battle while Robbie Tarrant marshalled the defence.

Adelaide's mature-aged recruit Shane McAdam was reasonable in front of goal and Rory Laird battled hard when he was moved to the middle but they did not provide the Kangaroos with much opposition as they lost their 12th game in succession.