The Gold Coast Suns have suffered a major injury scare, with emerging superstar Matt Rowell leaving the field nursing what could be a serious shoulder issue in a 37-point loss to Geelong on Saturday.

The Cats enjoyed successive wins for the first time since round 12 last year and ensured Gary Ablett, in his 350th match, and Joel Selwood, in his 300th, had a fitting celebration. Ablett’s long bomb from 55 metres with four minutes remaining was great theatre, while Selwood was typically busy. The two men were given a guard of honour post-match.

Rowell, 19, was hurt when he was tackled by Brandan Parfitt and looked to cushion his fall as he fell to the ground in the first term at GMHBA Stadium. He was immediately in pain, his right shoulder “hanging low”, and left the field with a trainer. 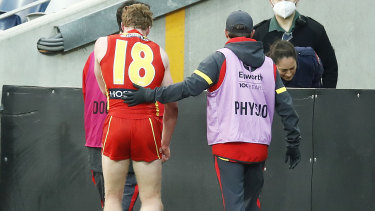 Matt Rowell is escorted from the field.Credit:Getty Images

Hawthorn took only a quarter to get used to their new hub in Perth on Friday night.

After losing four games on the trot between the Sydney Showgrounds and the SCG, and suffering a tough week of criticism and finger-pointing, the Hawks recovered from a slow start to take control of their clash with Carlton and score a 31-point win.

The Blues led by five goals midway through the opening term at Optus Stadium, before the Hawks turned a switch. 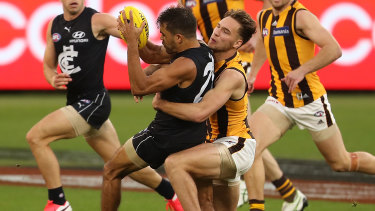 Geelong has won all six games between these sides at Kardinia Park by an average margin of 78 points. Joel Selwood has played in each of these matches, averaging 28.8 disposals, 14 contested possessions, 6.7 clearances and 4.3 inside 50s. He has also kicked five goals and averaged 1.7 score assists.

Round 10 kicked off last night with the Brisbane Lions scoring an impressive five-goal win over Richmond.

With the Tigers now 5-5, it begs the question, will they secure a double-chance this year? Have your say…

The Blues have failed every test against top-eight teams so far this year, proving beyond doubt that they are a mid-table side.

Making the finals will be extremely tough from a 3-6 starting point, but if they are to squeak into the top eight, they’ve got absolutely no choice but to beat the sides around and below them – starting with Hawthorn today.

If the Blues somehow fail to beat the Hawks, you can bet your bottom dollar that the pressure will start being ramped up considerably on coach David Teague.

The Hawks might be the coldest team in the league right now, but they would take some solace from the fact that they’ve won 17 of their last 18 encounters with Carlton. 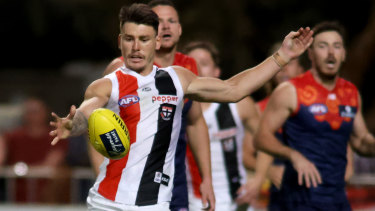 Williams back to familiar surrounds

Blues do well in territory battle against strugglers

Hello and welcome to the Round 10 edition of our Saturday AFL mega blog.

We kick things off at the MCG where Carlton face Hawthorn in what is a must-win clash for the Blues, while the Cats host Gold Coast down in Geelong.

The twilight fixture pits the struggling Crows against the undefeated Demons at Adelaide Oval.

And the night-time double-header sees the red-hot Western Bulldogs take on St Kilda at Marvel Stadium and Fremantle face Sydney at Optus Stadium.

Please feel free to leave a comment on the blog and enjoy the day and night to come.