Richmond are keen to flip the fixture and return to Perth next weekend to face the West Coast Eagles, as the AFL continues to deal with the fallout from Melbourne’s lockdown.

The Tigers have spent the week training in Sydney but will play Essendon in the Dreamtime clash at Optus Stadium on Saturday night. They are then due to have their mid-season bye but are open to shifting this and remaining on the road, bringing forward by a week their clash with the Eagles, slated to be held as a Thursday-night opener for round 14. 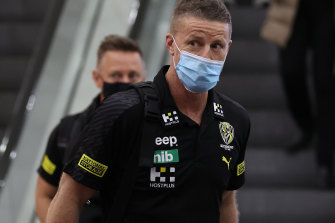 If the AFL makes the move, the Tigers will return to Sydney to train next week, and then head back to Perth to take on the Eagles.

Tigers skipper Trent Cotchin had been in doubt to face the Bombers because of his ill daughter in Melbourne but arrived with his teammates in Perth on Friday. However, he could also be in doubt for the Eagles’ clash should that go ahead.

Neither side has made a late change tonight with the medical subs Oskar Baker (Melbourne) and Rhys Mathieson (Brisbane).

‘You don’t ever let your guard down’: Racism and reality in Australia

We’re against racism, on that we all agree. Half-way through the Sir Doug Nicholls round in the AFL, we’re so very against it. But what exactly are we against? Racism flickers at the edge of white people’s consciousness, but for those who aren’t Caucasian, it is an everyday, in-your-face reality.

For former Essendon footballer Nathan Lovett-Murray, it is the memory of constantly finding himself in fights at school without knowing why. At nearly 40, it burns still. 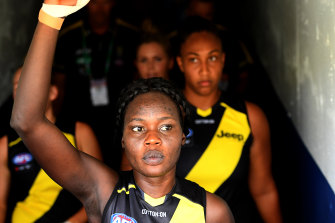 She doesn’t ride trams or trains, knowing she will be shunned, nor carry a backpack when she goes out, knowing it will be searched.

G’day everyone and welcome to tonight’s AFL live blog. I’m Roy Ward and I’ll be tapping the keys for all the major moments as two premiership contenders face-off in the Melbourne Demons and Brisbane Lions.

Due to the lockdown in Melbourne, these two sides will play at Giants Stadium in Western Sydney and while the setting is unusual, this still promises to be a red-hot match-up.

Please feel free to leave a comment on the blog and keep an eye out for our game from the archives, it’s a classic from the not-too-distant past.

First bounce is 7.50pm AEST. Enjoy the evening to come.