The AFL's highly centralised model has saved clubs and the competition, but it has simultaneously exposed structural weakness and cracks within the game.

That the league thinks only four clubs would be able to continue until season's end (if there is a season), without AFL financial support – with a further few such as Essendon, Adelaide and the Western Bulldogs viable without props until August – is an indictment on the imbalanced competition model and reliance on broadcast rivers of gold.

Yet, the AFL was only in a position to save these clubs because of their centralised control, and shrewd purchase of Marvel Stadium. Had the clubs been left entirely to themselves – as they were in the 1980s and for much of the 1990s – a few would surely be dead, relocated or merged. 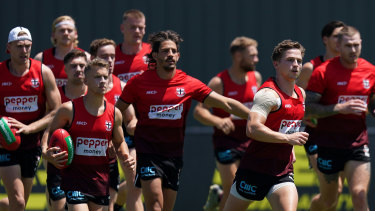 St Kilda receives one of the AFL’s largest distributions.Credit:AAP

The underlying issue, as Caroline Wilson's report makes plain, is that there aren't enough clubs with genuine financial independence. If this should change after the current great depression, then it is difficult to see how some clubs can achieve that goal within a decade.

It is the distributions to clubs – from Gold Coast's $27 million and St Kilda's $20 million to West Coast's $11 million – that tells the true tale of how clubs are placed to weather fiscal storms, not annual announcements of "profits''.

As predicted, while the clubs have been galvanised into working together, the crisis also revealed how their interests – and game plans – diverged, as the rich clubs took a different approach (seen in the exemptions given to West Coast, Collingwood and Richmond) from the fearful middle class and the poor.

It is striking how the AFL's situation mirrors that of the nation, as the central government's reach and role has been expanded to wartime levels and our major corporations have been rendered, if not helpless, then limited in their power.

The AFL has been at pains to say that preserving and protecting all 18 clubs is a priority, a mantra that has been repeated by chief executive Gillon McLachlan and his chairman, Richard Goyder.

Doubtless, their statement is genuine, but there's no time frame on it either. The league, having taken over the clubs like a quasi-receiver, has chosen to sacrifice jobs and pay across the industry – albeit largely sparing the players – rather than clubs, at this stage.

How long will this last? Who can say? If there is another external economic shock, post-pandemic, or if the next AFL regime drifts towards a more economic rationalist line, then weaker clubs would soon be under pressure again, though I cannot see the AFL jettisoning Gold Coast or GWS, particularly when rugby league and soccer are in far worse shape.

To borrow from the title of journalist Paul Kelly's seminal political history of 1980s Australia, we've reached the end of certainty in the AFL following almost two decade of stability.

The competition was imperilled in the mid 1980s, before the game went national. It is easily forgotten that the first expansion of 1986-87 was a desperate measure, designed in part to be the salvation of traditional clubs in Victoria, with the sad eventual exception of Fitzroy.

Survival was a club imperative right through the '90s, as Fitzroy fell, Footscray managed a Lazarus and North Melbourne and then Hawthorn and Melbourne went down the merger road. For a long time, North people would tell us that they could not afford to bottom out like other clubs. Sydney sometimes would say the same, in the knowledge that they were too strategically crucial to be allowed to go under.

The explosion in broadcast dollars enabled not only survival for the hitherto down-at-heel clubs in Melbourne, but the expansion and funding of new teams that will not be independent for a generation.

The peacetime prosperity ceased a few weeks ago. Henceforth, there are few certainties, besides that the AFL – now receiver, banker and doctor – has near-complete control of most club destinies.