An Anzac Day to remember at the footy

Footy felt like life at the MCG on Anzac Day: almost back to the way we were.

The crowd was just more than 78,000, which was 90 per cent of the newly enlarged 85 per cent capacity. It’s far from an Anzac Day record. But it is believed to be the biggest crowd anywhere in the world since the COVID pandemic set in. That’s a feather for the MCG’s cap. 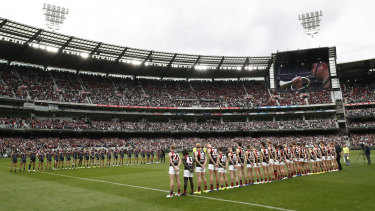 There were fans in every bay, on every tier, if not yet in every seat. The ’G looked full, sounded full, heaved and breathed like it was full. Because of ticketing arrangements, the crowd’s colours appeared to line up in almost military formation. The sound effect was ballistic, too.

Essendon came from behind to win a rousing game by 28 points. After eight Collingwood wins in the previous 10 Anzac Day encounters, the Bombers’ triumph also felt like the turning of a corner.

On the way to the footy and on the way home, it felt like 2019 again. There was the slow shuffle each way, apprehension and excitement on the march in, the burble of reflection, joyful and rueful, on the way out. These were nearly forgotten sensations. Incidentally, to judge from the incidence of mask-wearing on public transport, footy folk must believe we’re at herd immunity already.

But the day’s signal sound was silence. Last year, there was the silence of emptiness. It was total except for a lone bugler. There was no crowd, no game, no footy anywhere at that time. This year, there was the orchestrated, meaningful minute of silence observed by all preceding the first bounce. It’s a sound ground managers don’t understand. If only they were listening to its power this day. 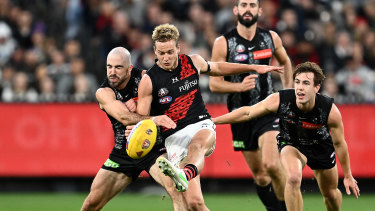 The next best sound was the roar at the first bounce. It was not tinny and distant like last year, not muted as in many early round games this year. It was rumbling and reassuring and sustained; it filled the stadium. The confidence to go to the footy: could anything else say more clearly we’re back?

Essendon and Collingwood are far from the best two sides in the competition this year, but they do know how to rise to and honour the Anzac Day tradition. As a grey and solemn-looking afternoon gave way to a brilliant floodlit dusk, there was nowhere else you’d rather be – if you could be there.

The footy? A young Essendon side whose luck and tide is beginning to turn overran a Collingwood side that is starting to run out of players, ideas and momentum. Until now, the Magpies had seemed unable to make up their minds whether they were re-grouping or re-building. A 1-5 win-loss record should help to clear that up.

After kicking two goals inside the first two minutes and another within five minutes, Collingwood spent the rest of this match clinging on to a plainly superior Essendon outfit. Somehow, after an early goal in the last quarter, they still led. Then a run of four Bombers goals wrenched the match out of their tenuous grasp.

It’s pointless to dwell on who was not available. Every side is carrying that cross to some degree. The Bombers are clear in their mission. They are sprinkled with youthful talent, but the players who best personified them were Darcy Parish, who had 42 touches, and Anthony McDonald-Tipungwuti, who slithered around, under and through packs for five goals. What a waste they would have been in a lockdown.

Collingwood had its cohort of beardless youth, but they were best characterised by Darcy Moore, an all-Australian defender last year who for the second week in a row stationed on what had become an unproductive forward line. It proved to be a false economy because the ball so rarely came to him there. At half-time, he returned to backline: see clinging on above. 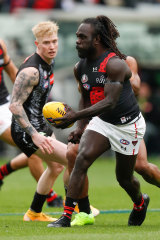 Anthony McDonald-Tipungwuti finished with a telling five-goal haul for the Bombers.Credit:Getty Images

At the risk of indulging in false equivalence, one of the threads of Anzac Day is youthful valour. It was on display again this day, fortunately in the only way it is called upon in 2021.

It’s not a bad time if this is the only war these young men ever have to fight. That’s what makes Anzac Day footy so important. One of the virtues is that every part of it is co-operative, except the playing of the game. They start by running through the same banner, and finish by lining up to acknowledge the taker of the spoils, this day the irrepressible Parish.

It’s not a bad Anzac Day if all you have to mourn is that your footy team have forgotten their winning ways.

Keep up to date with the best AFL coverage in the country. Sign up here to our Real Footy newsletter delivered to your inbox on Mondays and Fridays.