‘Backs against the wall’ but Pies relish Eagles final challenge

Collingwood are making no complaints about the difficult finals hand they've been dealt, with All-Australian midfielder Taylor Adams saying his team is relishing the backs-to-the-wall challenge of West Coast in Perth.

The Pies will fly out on Friday, six hours from Queensland to Perth, where they will be faced with seven days of quarantine while the Eagles are allowed to stay in their own homes. 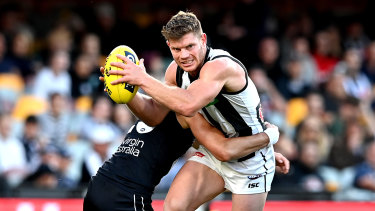 Adams said the Pies had learnt from their heavy loss to the Eagles at Optus Stadium in round eight, when Scott Pendlebury withdrew from injury moments before the bounce.

"That was probably them at the peak of their powers," Adams said.

"We got smacked around the ball and we couldn’t get any flow in our game. It was a great learning opportunity for us.

"It was the only outlier this year where we lacked real effort and intent across four quarters.

"We’re aware of the danger of what a quality side like West Coast can produce."

Speaking of his first All-Australian selection, Adams said a combination of consistency and luck with injuries had helped him achieve the reward.

He has battled hamstring, adductor and finger injuries in the last couple of seasons but not in 2020.

"It’s been my most consistent season. To play every game, especially during that condensed period, was something I probably thought was unlikely," Adams said.

"I had that 10-week period during the shutdown … where I went away and focused a lot on my game. Being really clean and efficient with the ball in hand.

"When we got back to training that three-week period was about trying to get as many contests as I could and get a feel for games again.

"I am happy to cop honest feedback and get to work on things that may not be strengths."