The Western Bulldogs remain within touching distance of the ladder-leading Demons after a gritty win over Fremantle in Perth, improving their win-loss record to 10-2.

The Dockers were gallant against the more-fancied Dogs, but class ultimately prevailed in the 13.15 (93) to 9.11 (65) result, which left the home side battered and bruised. 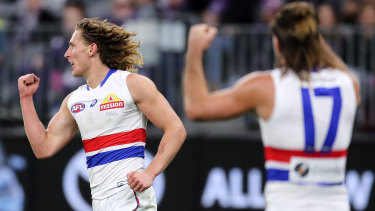 Captain Nat Fyfe suffered a shoulder injury in the final quarter, while ruck Sean Darcy (hamstring), Brennan Cox (hamstring) and Griffin Logue (concussion) left the Dockers without a bench by the time the game was over.

Logue was courageous going back with the flight on the last line of defence but was cleaned up by Aaron Naughton in a marking contest and was subbed out of the match deep into the final quarter.

Bulldogs captain Marcus Bontempelli proved the difference in the first half, kicking two long-range goals on the run to give his side a 16-point lead at the main break that was never overcome.

The Dockers lifted their pressure around the ball in the third term, with Fyfe willing himself into the contest to help his side get within a kick of the Dogs midway through the third quarter.

But the visitors were able to wrest control in the final term and ran away with a comfortable 28-point win in the end. 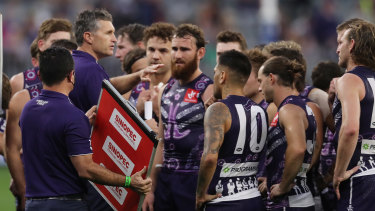 Key forward Aaron Naughton was prolific inside forward 50 with 13 marks, but sprayed 1.5 from his shots on goal. Cody Weightman (2.0) and Mitch Hannan (2.2) were also busy inside the forward arc, despite the Dockers’ defenders playing well for the majority of the contest, and Tom Liberatore also kicked two goals as crucial moments in the match.

A shoulder injury to ruckman Stefan Martin, however, soured the night for the Dogs, who will have a week off before their next contest against the Eagles in Perth. Martin returned to the field after first grabbing at his left shoulder but came off the ground after copping a second knock.

Ball magnet Jack Macrae was at his prolific best with 35 disposals and four clearances in the midfield, while David Mundy was among his side’s best with 30 touches, five tackles and eight clearances.

Bontempelli’s 27 disposals, seven clearances and two goals saw him continue with his elite form this season, while Docker Josh Treacy surprised up forward with 3.1 from 10 disposals.

Naughton provided one of the highlights of the evening with a spectacular mark early in the last term, but was unable to finish the set shot from 50 metres out. The Dogs outnumbered the Dockers at the contest for most of the match, apart from a period in the third term where the home side found a wind.

Rory Lobb, who was unable to have an impact in the first half, kicked a big goal in the third term as the Dockers started building momentum, but minutes later the former Giant missed a set-shot chance to double the pain.

After the final change, the Dogs showed why they were the better side, kicking five final-quarter goals to seal the win and entrench themselves in second spot on the AFL ladder.