Scans have cleared Western Bulldogs captain Marcus Bontempelli of a major knee injury but he remains in doubt for Saturday night’s preliminary final against Port Adelaide.

Bontempelli, injured in the one-point win over Brisbane on Saturday, had his posterior cruciate ligament assessed in Perth and is still “quite sore”. He remains hopeful of lining up at Adelaide Oval. 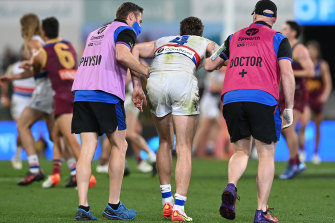 Marcus Bontempelli is helped off the Gabba on Saturday night.Credit:Getty

“In the last minutes of the game, Marcus landed and had his knee twisted,” Bulldogs’ head of sports medicine Chris Bell said.

“Scans have cleared him of any serious structural damage, but he does have some symptoms related to the injury. We’ll work with Marcus through the back end of this week to determine his availability.”

However, electric small forward Cody Weightman has been ruled out, having been concussed late in the first half. He spent the rest of the match on the bench.

“During the half-time break we made the decision to remove him from the game,” Bell said.

“Subsequent testing has confirmed he does have some low-level concussion symptoms.

“He won’t play this week, but we’ll monitor Cody in the next couple of days to determine his availability.”