Bordeaux 36-17 Bristol: Bears latest English side to fall victim to French domination of the Champions Cup… as Mathieu Jalibert inspires Begles to victory with 24 points

Bristol Bears became the latest English side to fall victim to a growing French domination of the Heineken Champions Cup.

Gloucester had already been crushed by La Rochelle and Wasps denied at the death by Clermont Auvergne. Champions Exeter were the only English side to break the losing sequence. 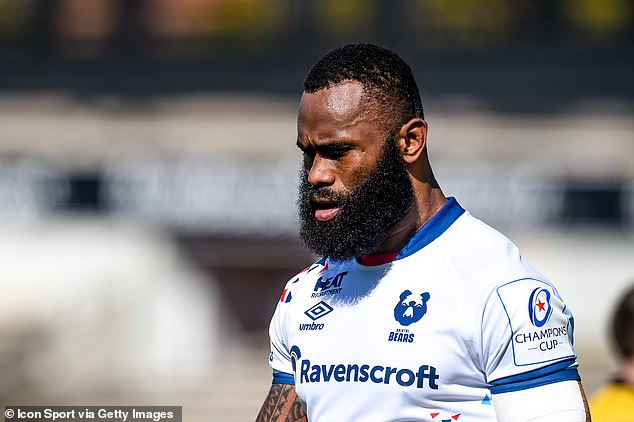 French sides now have five of the eight quarter-final slots, but Bristol were left angered at a key late decision which pushed them towards the exit door.

At 22-17 down and with Semi Radradra injured on the ground, the French smelt blood as Joseph Dweba ripped through the heart of the Bears to score the vital try.

But at the other end, Bordeaux-Begles had turned the ball over after a clear knock-on from their No 8 Scott Higginbotham.

Referee Mike Adamson and his TMO were blind to it, despite viewing multiple replays. Bristol’s Callum Sheedy was livid when the try was confirmed. ‘Are you serious?’ he questioned.

Austin Healey said on BT Sport afterwards: ‘There are 14 cameras at least and the French director only gave him a view of three. That is unacceptable and has to be looked at.’ Lam said: ‘Everyone was very clear it was a knock on.

‘The players are 100 per cent if that happens, but suddenly there’s no footage. There are more than two cameras out there. We’ve got to work with Joel on that.

‘Without that, it’s a one-score game. We win or we learn,’ added Lam. ‘A lot of teams that have those stars on their shirt, look at their journeys. It is hard to take but we will learn. 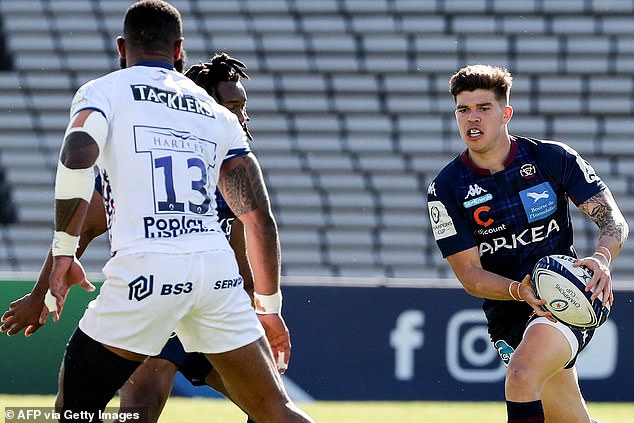 ‘But there is frustration — we had an opportunity to win.’ Within seven minutes they had a nerve-calming try, when Henry Purdy raced in on the left after quick work from the backs.

After that, though, it became a kicking battle between two young Test fly-halves with France’s Jalibert and Wales’s Sheedy kicking five and three penalties respectively.

Bordeaux’s last was against Nathan Hughes, who entered a ruck at the side and pushed the French side into a slender half-time lead.

For upwardly-mobile Bristol — who were not ‘Bears’ nor ‘Rugby’ but ‘Shoguns’ when they last enjoyed relative success in the Heineken Cup, finishing second in their 2002-03 pool — winning this would have been a triumph.

But after the break, Bristol were in a fight for scraps. Jalibert scored when diving for the line amid a pile of bodies — initially ruled out by referee Adamson, but overturned after a ‘clear grounding’ was found on review — which he converted to push the French lead to eight.

Bristol turned down a kickable penalty in search of more, which almost immediately paid off. Purdy looked over again, but for an exceptional last-ditch tackle from full back Romain Buros, knocking the ball from his hands as he grounded.

The Bears took the three points next time, Sheedy kicking them within five with 25 minutes to go. 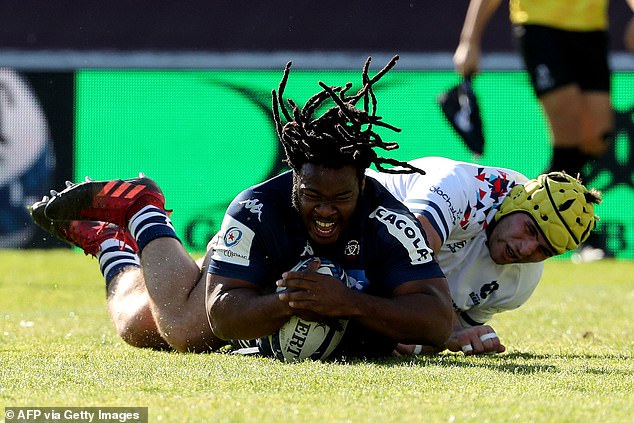 ‘Shape’ and ‘patience’ were the constant shouts coming from the sidelines, but despite Jalibert missing an easy penalty, Bristol were losing both with time ticking.

When Kane Douglas was sin-binned after repeated Bordeaux infringements, Bristol appeared to have their opening — entering the final stages one man up. But then the killer blow as Dweba scored his hotly disputed try.

In desperation, Bristol lock Chris Vui threw a needless intercept to Bordeaux, who now also had Cyril Cazeaux in the bin, which Nans Ducuing ran in and Maxime Lucu converted on the buzzer to complete the victory.