Lachie Hunter is still a chance of playing for the Western Bulldogs in Saturday night’s second versus third clash against Port Adelaide.

Hunter broke his hand during the Bulldogs’ win over Carlton last week but played through pain to play a crucial role in his side’s come from behind victory. 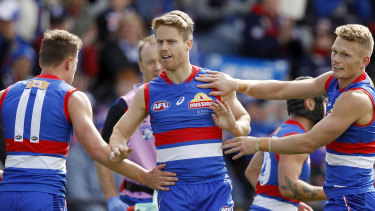 The midfielder had surgery on Monday and was back running at training on Wednesday at the Whitten Oval.

“[We’re] still not sure at this point. He’s got a little bit to get through, and a few days to make a decision,” his captain Marcus Bontempelli told RSN of his availability.

“Yeah, he is going to train today so we will see how he goes. I think we will find out a little bit later in the week,” Bruce said.

“[It is] one of the toughest things I’ve seen to be able to play through with a broken hand and actually have a really strong influence in a physical sense as well. He was laying tackles and putting pressure on and kicking clutch goals with a broken hand.

“It’s pretty incredible and he’s the kind of player who rarely misses.

“He told me after the game [about the injury] as we were walking off. You wouldn’t have known otherwise.”

The Bulldogs also said that injured trio Bailey Williams (collarbone), Ryan Gardiner (shoulder) and Tim English (concussion) could all be in the selection conversation for the match.

“Both Bailey and Ryan have completed the final stages of their rehab,” Bulldogs head of sports medicine, Chris Bell said.

“[They] are re-integrating back into full training this week, and if they get through training like I expect, both will return to availability.

“Tim still had some very low-level, persistent headaches last week. We don’t want to take any risks with Tim.

“He’ll continue to work closely with our doctors to determine his availability for this weekend’s game.”

The Bulldogs said they had been managing Martin’s injury for some time but it had last week gotten to the point where it was having too much of an impact on his performance.

No.1 draft pick Jamarra Ugle-Hagan continues to recover from a concussion suffered in the VFL last week. He would have had the week off, regardless – unless selected for the AFL – given Footscray have a bye this weekend.

Bruce has been in decent touch for the Dogs this year, kicking 25 goals including a bag of five against Carlton.

“Coming over from the Saints and not being accustomed to the way we played, and then moving to Queensland … I found it extremely challenging at times [in 2020],” Bruce said.

“Now I’ve had that continuity with the group, I’m starting to jell a little bit better and understand the way they want me to play.”

Keep up to date with the best AFL coverage in the country. Sign up here to our Real Footy newsletter delivered to your inbox on Mondays and Fridays.