Bulldogs finally score, but not enough to trouble Storm

The Bulldogs finally troubled the scorers. Troubling Melbourne, however, proved a challenge well beyond them.

During his second coaching stint at Penrith, Trent Barrett earned himself a reputation as something of an “attack whisperer”. Points have been much harder to come by since the shift to Belmore. 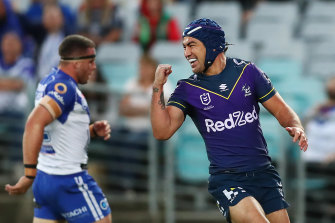 Jahrome Hughes celebrates one of the Storm’s nine tries.Credit:Getty

When Luke Thompson scored a quarter of the way through the game, it was effectively over as a contest. It did, however, mark the first points Canterbury had scored in 265 minutes of football.

That try, as well as those scored by Jake Averillo and Dallin Watene-Zelezniak, were never going to be enough. But at least they saved Barrett the embarrassment of becoming the first coach to preside over four consecutive scoreless matches. They added only a modicum of respectability to the final 52-18 scoreline.

What is proving more elusive than tries for Barrett is a win in the blue and white. There were already concerns about the gulf between the strong and struggling clubs. This clash was predicted to be the most lopsided fixture of all.

No team has ever started shorter-priced favourites in NRL history than the $1.02 Storm. By the time last year’s champions ran onto ANZ Stadium, their bottom-placed opponents were rated $18 outsiders. The bookmakers weren’t generous enough.

Not even the returns of Josh Jackson, Watene-Zelezniak and Thompson were enough to generate an upset. The blue and whites enjoyed a handful of bright moments, mostly courtesy of Averillo and Thompson, but still conceded a half-century of points.

Canterbury literally showed some fight, but it resulted in Ofahiki Ogden, as well as Nelson Asofa-Solomona in the sin bin. Most of the fireworks, however, were at the neighbouring Easter Show. That only 5104 fans attended is an indicator of how quickly the pre-season optimism surrounding Canterbury’s chances has dissipated.

The Storm ran in six converted tries in the opening half to lead 30-6. Three of them were short-range, barge-over efforts through a tissue-thin defence. This despite the fact Canterbury completed all but two of their sets.

Things didn’t get much better in the second stanza. When Ryan Papenhuyzen outsprinted everyone to plant down a George Jennings kick early on, the floodgates appeared to open. The Bulldogs momentarily stemmed the tide and even had the better of proceedings for a short period. However, normal service resumed when the visitors scored the final three tries.

The Bulldogs continue to pay the price for their recruiting sins. Nick Cotric swapped Canberra for Canterbury for the chance to earn “centre money”. Against the Storm, he wore the No.2 jersey.

They have also paid top dollar for another winger, Josh Addo-Carr. ‘The Fox’, having committed to Canterbury while still wearing the purple of the Storm, could be forgiven for having second thoughts about the move. His late try was a highlight for his current and future club.