Cameron country: where defenders aren’t in the hunt

A few years back, in the middle of the footy season, Jeremy Cameron would stretch out in his swag on a property near Mittagong in NSW's southern highlands, about 90 minutes from Sydney.

The fire would smoulder nearby and his teammate Ryan Griffen would be getting some shut-eye too. 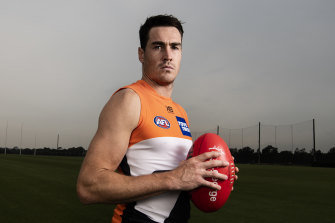 Despite the game being just a couple of days away, the pair loved heading to the bush, hunting on a friend's property on their day off for a mental break.

The tough forward's love for the outdoors is well known, his Dartmoor heritage always closer to the surface than any snapper he might hook whenever he drops a line in the water during his regular fishing forays.

While Cameron admits the mid-winter camping trips were a bit different, he's adamant that the pair – who remain great mates – felt the benefits even though they were a bit shy about telling their coaches where they were.

"I remember us marking down how we played every time we went to the farm and it was bloody unbelievable the results we were seeing."

No one can argue with Cameron when it comes to results. The 27-year-old has kicked 406 goals in 155 games, bagging at least five in a game 20 times.

He has led the Giants' goalkicking each season – sharing the honour with Toby Greene and Jonathon Patton in 2017 – won a best and fairest, a Coleman Medal and twice been named All-Australian.

That's not a bad effort for someone who did not begin playing until he was 15 and attended his first AFL game live – the 2010 drawn grand final – less than two seasons before his AFL debut.

He announced his presence like a semi-trailer rumbling through a country town at night, with a five-goal haul in just his fourth game. But, with chicken legs and barbed-wire arms, it was his toughness that shone through. His eyes would not deviate from the ball once the sight was set.

Sometimes, such as when he received a five-match suspension after his forearm collected Brisbane Lions' defender Harris Andrews, it has landed him in trouble.

Occasionally his in-built approach also earns his coach's wrath during match practice when he suspects disaster might be approaching.

But most of the time his approach wins him admiration as he makes the Giants' forward line an unpleasant place for opposition defenders.

"I see a ball, I want to get that ball, and that is how I have always played and if that is 30 metres away I am going to work my arse off to get there at a high speed to try to at least bring the ball to ground or mark it and go forward from there," Cameron said.

''Sometimes it is half a second off and you get it wrong and you have to live with that.''

"Sometimes it is half a second off and you get it wrong and you have to live with that. That is the way I have looked at it. I haven't changed anything and I don't shy out of contests.

"I love attacking the footy."

Having at least half a dozen teammates who play in a similar manner has made the Giants a good team but it has also forced the coach Leon Cameron to bring in a rule at training that halts play as soon as it gets too willing.

"At the double whistle, you just have to stop match play," Cameron said.

It means a worried coach doesn't have the whistle too far from his lips preparing to blow it twice in quick succession in the hope his players will immediately transform from dangerous weapons into statues.

Nothing fazes Cameron, except perhaps his brother, Travis, a body-builder who is in, as Cameron says, "incredible nick".

"I don't reckon he has ever beaten me in a wrestle but I have not taken him on in the last four years … now he is doing that sort of thing I think he would demolish me," Cameron said.

"Demolish" is the word Cameron uses when describing the disappointing grand final loss to Richmond, which clouded an otherwise outstanding finals series.

The Giants haven't overlooked the positives in reviewing September but the grand final provides further motivation for a team that believes it is good enough to win a flag.

"We did roll into this year with the mindset that we have made four [finals series] in a row but we have got nothing to show for it really," Cameron said.

"We built a bit of a reputation but there is no trophy in our cabinet, no medal around our neck and we came back really driven this pre-season."

Unfortunately the Giants don't have much to show for that pre-season either, apart from a comfortable 32-point win over the Cats where Cameron kicked three goals and earned two coach's votes.

Out of contract and a restricted free agent, he is unable to sign during the shutdown period but he is yet to make a decision on where he will play in 2021 anyway, taking his time to work out how he can best set himself up for a life outdoors post-football.

"Nothing has really changed for me. I haven't sat down and gone, 'I think I want to go here or there or I want to stay.' It has always been that I love the Giants and what we are building up here," Cameron said.

Right now Cameron is training in Daniel Lloyd's makeshift gym near his house in Concord, where he lives with his girlfriend Indi – who happens to be Griffen's wife's sister – and under NSW restrictions he can also go fishing.

At some point he will get back outdoors in familiar territory following his passions outside football with friends such as Griffen and his wife Jasmine.

"You have got to be mindful you can't keep doing it every week. Maybe once a month just to freshen up," Cameron said.

"[Griffen] was awesome for me. We [visit the farm] in the off-season flat out … light a fire and then sit around and talk about footy and just life and that is why we have become so close. I also met Indi through him and Jazz."