A controversial penalty try has ended one of the greatest winning streaks in rugby league’s modern era.

Table-toppers Penrith finally crashed to their first loss of the year – and first defeat in 28 regular-season games – as bitter rivals the Wests Tigers triumphed 26-6. 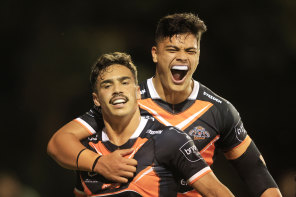 The Panthers were always going to do it tough without seven Origin stars and suspended prop Moses Leota.

But their cause was not helped when Luciano Leilua was awarded a penalty try in the 66th minute after Rob Jennings made contact with his head.

Luke Brooks sent a flat kick across field, Adam Doueihi tapped it back for Leilua, who went to dive for the line before he was clocked by Jennings.

Leilua dropped the ball but referee Grant Atkins was happy to rule a penalty try.

Tigers great Steve Roach asked during the commentary what other option Jennings had, especially given he was trying to punch the ball free from Leilua rather than his actual head.

The 9127 Tigers faithful erupted, knowing their side was about make it back-to-back wins for the first time in a year.

There is no team Tigers fans love beating more these days than Penrith because of coach Ivan Cleary.

Cleary walked out on the Tigers to coach the Panthers a couple of years ago, and when Doueihi converted a penalty goal with five minutes remaining, a large group in the grandstand turned to the Panthers boss to give him a good old-fashioned one-fingered Leichhardt salute.

The Origin-like hatred between the two western Sydney rivals continues to grow.

Tensions flared on more than one occasion, including early in the second half when a melee broke out when Daine Laurie was taken out by Viliame Kikau when trying to defuse a bomb.

Tigers players also grew frustrated in the first half when several Panthers stayed down and clutched at their faces to win penalties. Nofoaluma was even placed on report for a shot on Paul Momirovski that would not have drawn any action just a month ago.

Penrith were without their co-captains Isaah Yeo and Nathan Cleary, Jarome Luai, Brian To’o, Liam Martin and Api Koroisau because of NSW Origin duty, while Kurt Capewell was with the Queenslanders.

They clawed back from 10-0 down at the break to make it 10-6 when Matt Burton strolled over almost untouched.

The Tigers got a little nervous as they tried to defend their skinny lead. The penalties and set re-starts continued to climb.

But when they were given a rare chance to march upfield and then score via their barnstorming back-rower Leilua, victory was on the cards.

The Tigers will chase three straight wins for the first time since rounds four to six in 2018 when they meet Parramatta next Sunday afternoon.

Cleary will be hoping his Origin contingent come through unscathed and are able to back up for the Panthers against Cronulla 48 hours after the Townsville opener.

One of the first-half highlights was Jacob Liddle’s 95m try off a Dylan Edwards grubber. Matt Burton was the closest chaser while noted speedster Charlie Staines was spotted late cranking into fourth gear, but Liddle was too good.

Liddle, who ignored interest from Canterbury and the Gold Coast to re-commit to the Tigers during the week on a new two-year deal, took a while to bounce back to his feet as he enjoyed a breather.

Back-rower Luke Garner, who was happy to go after Latrell Mitchell earlier this year, thought it would be fun to get into a running battle with Penrith hardman James Fisher-Harris.

Garner was later placed on report when he clocked Fisher-Harris high during the 14-minute penalty blitz.