Could the Pearce name be returning to the Tigers?

Could the Pearce name be returning to the Tigers? There is plenty of speculation about Mitchell Pearce’s immediate future, and there is an appetite from some at the Wests Tigers to provide the halfback with some food for thought.

Pearce is contracted to Newcastle for next year on a deal worth around $500,000, but he has been consistently linked to the Bulldogs and Raiders.

His father, Wayne, played his whole 11-year career at Balmain between 1980 and 1990. He also coached Wests Tigers in the club’s inaugural season back in 2000.

But there is another link to the club that could prove pivotal. Pearce’s best friend Liam Roach, who is the son of former Balmain legend Steve Roach, works for Tigers chairman Lee Hagipantelis at Brydens Lawyers. You’d be naive to think conversations aren’t being had.

CEO Justin Pascoe also struck up a relationship with Pearce after they bumped into each other and spent time together in New York City on holidays a few years ago. General manager Adam Hartigan is also friends with Pearce from their time together at the Sydney Roosters.

Halfback Luke Brooks is represented by the same management company that looks after Knights coach Adam O’Brien, but the Tigers don’t want to lose their halfback in a swap deal for Pearce. The Knights also haven't indicated they'd be willing to release Pearce. 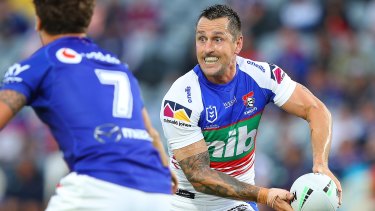 Some at the Tigers believe Mitchell Pearce would be a good foil for Luke Brooks at five-eighth.Credit:NRL Photos

There is a feeling from some at the Tigers that perhaps Brooks would be better suited to the No.6 jersey, releasing him of the burden of managing the team. It’s why Pearce’s name has been floated a potential foil for Brooks at No.7.

That could see Adam Doueihi, who may miss up to half of next season after picking up an ACL injury last week, play in the centres alongside English recruit Oliver Gildart.

That would allow fellow signing Jackson Hastings to play a similar role to Melbourne’s Brandon Smith, shifting between hooker and lock.

Despite his struggles over the past couple of years, the club doesn’t want to lose Brooks but are aware that some people close to the halfback believe he may benefit from a fresh start elsewhere.

The decisions they make in the off season will go a long way to determining the halfback’s future.

The club will conduct its annual end-of-season review in the coming weeks, which will include the input of Tim Sheens. You can be guaranteed there will be plenty of focus given to the lack of performance this season.

Despite assurances from club powerbrokers that the coach is safe, Michael Maguire's fate will be determined by the findings of the club's review. One more year or move on? That's the big question.

The Rabbitohs could find themselves in hot water over an incident involving Tevita Tatola in the first half of Friday night's spiteful clash against the Roosters.

Interested onlookers spotted Roosters coach Trent Robinson quizzing the HIA Assessment Unit on the sidelines as to why Tatola was able to come off and provide a free interchange to South Sydney in the 21st minute.

The Roosters were convinced the incident happened within the first eight minutes of the game, leaving the club scratching their heads as to why he was able to play on for up to a quarter of an hour without coming off, then granting the Rabbitohs a free substitute at the ideal time.

The Herald approached the NRL yesterday but they were yet to look over the report from the match. Watch this space.

If the Panthers play the Rabbitohs in week one of the finals, don't expect them to roll over and accept NRL allocation for the venue of their grounds.

The Panthers are expected to finish second and play the Rabbitohs in week one. As the higher ranked team, they don't want to be disadvantaged by having to travel two and a half hours from their Sunshine Coast base to play on the Gold Coast, where the Rabbitohs are staying. They've requested to play at Suncorp Stadium.

Chee Kam on the move?

South Sydney are closing in on the services of Wests Tigers utility Michael Chee Kam for next season. Tigers coach Michael Maguire originally indicated the Chee Kam wasn’t part of his plans, but has softened on that stance in recent weeks. It may be too late.

St George Illawarra are sniffing around powerful Parramatta forward Marata Niukore. The Eels backrower still has another year to run on his deal but the Dragons like what they see.

Penrith Panthers head of performance Hayden Knowles will depart the club at season’s end to link with the Newcastle Knights.

Knowles, who is also Brad Fittler’s right-hand man for the NSW Blues, has played a huge part in creating an environment at the Panthers that has allowed its stars to shine on the biggest stage.

He recently informed the players that this would be his last year, taking a job with the Knights to be closer to his family.