Daniher pushing for return in Dons’ next game, which could be in July

Injury-plagued Essendon star Joe Daniher could be ready for round two, according to coach John Worsfold. And round two will be in July, "at the latest", according to club boss Xavier Campbell.

Campbell, speaking on the club's podcast Working through it, says clubs have been given a "high-level briefing" on the issue of hubs by the AFL. 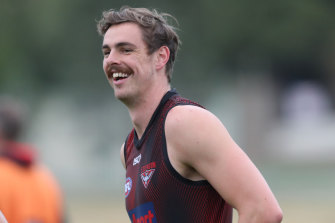 Joe Daniher is on the comeback from injury and could be fit to play as soon as football returns.Credit:AAP

"I feel relatively confident that in July we'll be back playing football. It's not going to be in front of crowds, obviously," he said.

Worsfold has also thrown his support behind clubs being relocated to "controlled environments" if it means football will be played sooner.

Despite Victoria's stage three restrictions in response to the outbreak of COVID-19, Worsfold told reporters on Wednesday that Daniher was still allowed access to a physiotherapist through their practice.

With games unable to be played until at least June, the strange circumstances have given the 2017 All-Australian a chance to concentrate purely on his rehabilitation in a bid to be available for the Bombers' next game.

"Obviously what it means is that Joe might not have been available until round whatever it is – five, six, seven or eight – [but now] potentially he's going to be available for round two, which I'd be pretty excited about if I was Joe," Worsfold said.

"He misses less footy than he potentially would have, and I'm sure that's what he's focusing on. As are players like Cale Hooker and Dyson Heppell who had resigned themselves to missing some rounds of footy this year and potentially may not miss too much."

Daniher is continuing to recover from the debilitating groin injury he's been suffering from since 2018 after his quest to move to Sydney was denied by Essendon during last year's trade period.

He will be a restricted free agent at the end of this season, with free agency and the forthcoming trade period likely to be in some way impacted by the changing landscape of football.

The lack of certainty surrounding the industry may also impact homesick Irishman Conor McKenna, who has once again returned home to be with his family amid the ongoing coronavirus crisis.

Worsfold – who himself has been self-isolating since returning home to Perth – says he's been in contact with McKenna via message.

"I'm pretty confident [he'll return]. It's not the end of 2020 yet. There's a lot of footy left to be played hopefully this season. I think Conor was up and ready to go," he said.

"My expectation is that he's really keen and he'll be over there following a training program and looking forward to getting back over here and getting into it."

Worsfold has also weighed in on the chance of clubs being moved to hubs, where players would be kept away from the public, including family members for a period of time.

While the idea has been criticised by some players, including AFLPA president Patrick Dangerfield, Worsfold took an opposing view.

"A lot of them do it already, I'm not sure what percentage of players get drafted interstate and within a couple of days they've moved

"If it has to happen to get the comp going … I think the majority of players would be keen to be involved but I'm certainly not going to speak on [behalf of] the players' association.

Worsfold said he's been speaking to all the players on a semi-regular basis and believes the lack of routine has been one of the biggest challenges for the group.

"All of sudden you're stuck in your home for long periods. What time are you getting up? What's your first activity of the day? When are you going to do training, study?

"They're now understanding this is going to be a longer-term thing. This will go on for another three weeks and from there we don't know.

"Most of them have been pretty good other than a bit of frustration."