Daly Cherry-Evans was immense in his old stomping ground and Tom Trbojevic roared back to life as Manly buried the Sydney Roosters 42-6 in Mackay to set up a preliminary final showdown with Wayne Bennett and the Rabbitohs on Friday night.

Humbled 40-12 by a rampant Melbourne in week one of the finals, the Sea Eagles returned to the field with boundless energy and crisp execution to race to an 18-0 lead over the battered Tricolours and were never troubled as the procession continued through 80 minutes.

Cherry-Evans spent much of his youth in Mackay and produced the perfect captain’s knock in front of appreciative locals, having a hand in everything for Manly and scoring untouched under the posts in the first half to lead from the front.

And Trbojevic was up to his old tricks after being muzzled so effectively by the Storm on the Sunshine Coast. While Melbourne starved Manly of good ball and chased kicks like pitbulls to limit his involvement, the Roosters were in a far more generous mood.

He scored in the fifth minute and the 45th minute loomed up on so many occasions that he could have easily added a few more to the tally. He returned the ball with venom, as well, at one stage launching Sam Walker so high into the air he almost alerted traffic control at the nearby airport.

Collectively, the Roosters had a terrible night with the hands, producing 13 errors as Manly went back to the well time and again. The Sea Eagles established a clear foothold through the middle of the field and their danger men had the freedom to attack as a result. 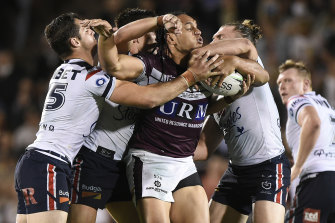 This was exactly Des Hasler would have wanted from his side as they sought to bounce back from their underwhelming performance against the Storm. What Melbourne did to them, they did to the Roosters with similar precision.

He was adamant the issues that night could be fixed and he was right, although an under-strength Roosters outfit could barely muster a quarter of the resistance of the well-drilled Storm machine. But the manner in which they tore the Roosters to shreds will please the mercurial coach no end.

Their focus will now turn to the Rabbitohs, who they will meet on Friday night at Suncorp Stadium. Bennett’s men have enjoyed the benefit of the week off after their upset of Penrith and the old master will have been plotting from the moment full-time was sounded on Manly’s triumph.

The last time the sides met was all the way back in round two, where Souths won 26-12, but that may as well be in an alternate universe given what has transpired since. Manly lost their first four games, Souths lost the same number of matches all season, but once again Trbojevic looms as the potential circuit-breaker.

It was the most difficult of nights for a Roosters outfit that held on so tightly to beat the Titans last week. In truth, they had been flying on vapour towards the finals for some time after a season in which they were savaged by serious injuries and retirements.

The side they turned out against Manly wouldn’t have looked much like the one Trent Robinson would have envisaged if he had to dream up this scenario at the start of the year.

Mainstays Boyd Cordner, Brett Morris and Jake Friend all retired along the way, leaving a vast experience gap for young stars such as Walker to attempt to fill. Luke Keary and Lindsay Collins both ruptured ACLs, while boom schoolboy Joseph Suaalii succumbed to a foot injury.

Sio Siua Taukeaiho (knee) and Joseph Manu (facial fracture) were among the more recent casualties, while hooker Sam Verrills was suspended for a dangerous tackle. It added up to a thumping defeat for a side that must put the pieces back together in the off-season to remain a perennial post-season presence.