Does Latrell Mitchell want to be crying from the stands like Sam Burgess?

“Maybe I couldn’t be skinny and tall, but I’ll settle for being the greatest artist of all time as a consolation,” Kanye West once said.

I feel you, Kanye. I feel you.

Latrell Mitchell could be the greatest rugby league player of all time — or at least counted among them — but he can’t if he’s not on the field, constantly watching from the sidelines like he is now after his sickening tackle on Roosters centre Joseph Manu.

Apart from Manu’s recovery from a fractured cheekbone, how Mitchell channels his aggression is the key takeaway from this ugly episode.

If Mitchell wants some advice on what the hollow sensation of not playing football feels like, he could speak to another Rabbitohs great in Sam Burgess. More than a few people are starting to draw comparisons between the two.

Burgess played alongside brothers George and Tom in the opening match of the 2013 World Cup against Australia at Millennium Stadium in Cardiff. 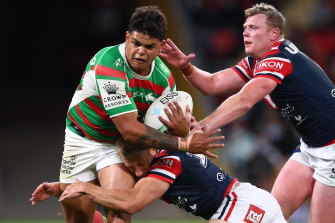 South Sydney’s Ferrari is at the crossroads of his career. Which path will he take?Credit:Getty

Then he was suspended for a swinging arm that collected the head of Kangaroos forward Sam Thaiday, meaning he missed England’s second match against Ireland in Huddersfield.

It should’ve been the proudest moment of his career: playing for his country alongside his brothers in front of a heaving crowd not far from where they grew up in Dewsbury in England’s north.

Instead, Burgess was sitting in the stands, tears running down his cheeks because he wasn’t standing alongside them.

For the rest of his career Burgess walked a fine line. We loved him for it, but he also cost himself plenty of game time, culminating in his famous statement in 2019 about the NRL judiciary being a “kangaroo court”, a defiant stand that led to a fallout with co-owner Russell Crowe. Judiciary members considered taking legal action.

Mitchell is starting to tiptoe a similar line. In April, he copped a four-match ban for a forearm to the face of Wests Tigers David Nofoaluma. He received two more charges from that match for incidents involving Luke Garner. Now he’s sitting out a further six matches because of the Manu shot.

That’s a lot of time to have your expensive Ferrari parked in the garage.

Much has been made about Mitchell’s style — playing “on the edge”, as it’s been described — and while it’s a nonsense to say he intended to injure Manu, it was a low percentage tackle that had devastating consequences, ending the season for himself, Manu and, in all likelihood, Souths.

Was it worth it with the match well and truly over? 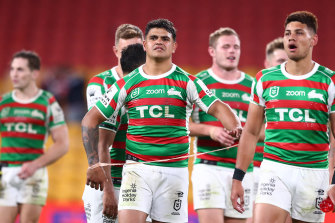 Latrell Mitchell has already been suspended this season.Credit:Getty

The Roosters’ reaction has been heavy-handed, although understandable given the frustrations they’ve felt this season with 60 per cent of their salary cap sidelined through injury.

According to those on the sideline last Friday night, players and coaching staff were ripping into officials from the early minutes of the match, itching for some tongue-fu with whomever crossed their line of vision.

Coach Trent Robinson’s comments in the post-match media conference were hard to argue with but the spinning of the narrative in the days that followed, including angry phone calls to former players merely offering an opinion in their roles as media experts, was beneath such a fine club.

The Roosters have also painted themselves as the victims of a clandestine plot from League Central. Alas, the Bunker and Match Review Committee don’t discriminate when it comes to dispensing incompetency.

Still, it was hard not to chuckle at this meme doing the rounds: “BREAKING NEWS: The NRL have reviewed the Latrell Mitchell hit and decided to suspend Victor Radley for another eight weeks!”

Rugby league will be performing here all week. Try the veal.

As for Manu, it’s a cruel way for his season to end. He’s shadowed James Tedesco as the Roosters’ best in a tricky year and is now worth $1 million on the open market.

He handled the situation better than anyone, even with his face blowing up like a puffer fish. His look of casual disdain will surely give Mitchell food for thought.

I interviewed Manu before the 2018 grand final when he and Mitchell were teammates. During that year, the two centres defended against each other in opposed sessions.

“It’s just been tough, eh?” Manu said. “It hasn’t been fun at all. I just go in at him. You can’t give him any room. He’s got the footwork and then the big fend.”

Unfortunately for Manu — Mitchell, too — he’s also got the big, wayward shoulder.

If anything, Mitchell appears to be on the same page as everyone else at Souths this year: aggressive, almost arrogant, bullying their way towards the finals.

Cody Walker has been a ball of fury. Damien Cook won’t get out of the ref’s face. Even Cameron Murray seems to be wearing his cranky pants. 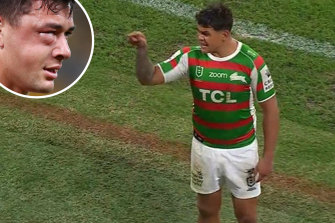 There is nothing wrong with this. But when the line is crossed, as Mitchell did, it can rob you of your best player.

Nevertheless, the character assassination of Mitchell from some quarters in the past week has been extreme, even by rugby league’s standards.

As Kanye says, “My greatest pain in life is that I will never be able to see myself perform live.”

The game as much as South Sydney is poorer when Latrell Mitchell isn’t on the field.

Humble Cecchin an ornament to the game

Leading NRL referee Matt Cecchin revealed to the Herald on Tuesday he was retiring at the end of the season, which is likely to be Saturday night’s Souths-Dragons match because, for some absurd reason, he’s not considered in the top four referees in the game and won’t take part in the finals.

He followed up the story with this text to your humble columnist: “Please pass on to whomever in club land asks that I am sorry for all the mistakes I made”.

Cecchin has been lavished with praise since the story broke with Andrew Johns particularly effusive. 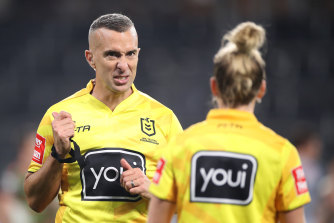 Matt Cecchin will likely take charge of his final NRL match this weekend.Credit:Getty

You may recall Johns was suspended for two matches in 2006 after spraying Cecchin during a match between the Knights and Manly in Newcastle.

Cecchin was the linesman and Johns took umbrage when a knock-on from Sea Eagles centre Steve Matai wasn’t ruled “deliberate”.

It can be revealed after all these years that Cecchin didn’t make the call — referee Paul Simpkins did — but Cecchin kept quiet and absorbed the torrent of abuse in the days that followed.

Referees boss Robert Finch, who had refused to appoint Cecchin as an NRL referee for three seasons, didn’t forget it.

‘Finchy’ said, ‘I’m proud of you taking one for the team and want to show I appreciate it by giving you another chance. I didn’t look back’

“The only reason Robert Finch gave me another chance in the NRL is because I copped that decision,” Cecchin recalled. “Everyone thought I made it — but I didn’t. In those days, we had to make a judgment if the player had played at the ball or not. After that game, every time it hit the opposition player’s hand, whether he made a tackle or not, it was always considered to be played at.

“I copped it on behalf of the other officials. They kicked on the next week and went through to do the grand final that year. ‘Finchy’ said, ‘I’m really proud of you for taking one for the team and I want to show you how much I appreciate it by giving you another chance in the middle’. I didn’t look back.”

THE QUOTE
”Fact of the day. It takes Stefanos Tsitipas [sic] twice as long to go the bathroom as it takes Jeff Bazos [sic] to fly into space. Interesting.” — Andy Murray fires further shots, via Twitter, at the Greek No.3 over his controversial eight-minute bathroom break at the US Open. Apparently, this is how professional sportspeople communicate these days.

THUMBS UP
Cristiano Ronaldo, 36, is returning to Manchester United on a two-year-deal after leaving them 12 years ago. His weekly income is expected to be $725,000 a week. Yes, that’s obscene money. Yes, it could be spent on more important things. Yes, his massage gun ad is creepy. But what an incredible story, which at the end of the day, moving forward, is all that matters. 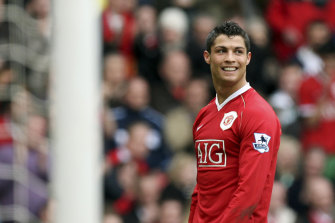 Cristiano Ronaldo during his first stint at United.Credit:AP

THUMBS DOWN
Who’s dumber? GWS star Toby Greene giving an AFL umpire a mouthful before breaking the cardinal sin of bumping into him — or the independent tribunal that banned him for three matches, not six, forcing the AFL to appeal the decision? Did you answer “Toby Greene”? Well done.

It’s a big weekend for … Alexei Popyrin, who won through to the third round of the US Open on Thursday morning (AEST) and next faces Brit Dan Evans, who beat him at Queen’s Club earlier this year.

It’s an even bigger weekend for … the Paralympics, which concludes on Sunday night with the closing ceremony. Still plenty of time to win medals of various hues, including Jaryd Clifford in the marathon.