Essendon, yet to make a trade during this trade period, are keen to acquire an additional first-round draft choice for 2021, in a strategy that Melbourne successfully deployed in recent years.

AFL industry sources confirmed that the Bombers, who enter the draft with pick 11, but no further choices inside 50, are willing to trade their 2022 first-round pick for a first-rounder in the 2021 national draft, to be held in late November. If no club is willing to do a first-round swap, there is also the possibility of trading in second-round choices. 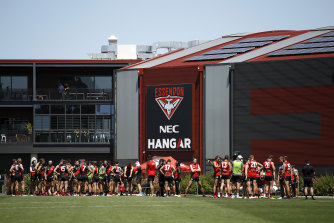 The Bombers are hoping to trade for more early picks.Credit:AFL Photos

The logic behind trading the 2022 pick for one this year would be to create a cluster of players who come through together, a pattern that Melbourne followed when the Demons traded future first-round choices into the upcoming draft in 2015, 2019 and 2020.

The Bombers had three selections inside the top 10 last year, due to the loss of Joe Daniher and Adam Saad, in what turned out to be a blessing for the club in setting a foundation for a list regeneration based on young talent as they selected Nik Cox, Archie Perkins and Zach Reid with those top 10 picks.

But it is unclear whether there is a club that is willing to give up a first-round choice in 2021 in exchange for a selection in the first round of 2022. Richmond (7, 15), the Brisbane Lions (14, 18) and Greater Western Sydney (2, 13) each hold two first-round selections.

Fremantle have the best hand with picks 6, 8 and now the pick 19 they acquired in a salary dump deal with Gold Coast.

The Bombers also have been in the market for a small pressure forward, having shown some interest in discarded Adelaide forward Tyson Stengle who is favoured to join Geelong, in part due to his relationship with new Geelong staffer and Crows and Carlton great Eddie Betts, who mentors Stengle.