‘Everyone is retiring me, except me’: Benji says grand final might not be last dance

NRL veteran Benji Marshall says Sunday’s grand final may not be his last game and is adamant he could play on for another year.

Speaking ahead of the premiership decider against Penrith, Marshall said he is yet to make a decision on his future despite comments made by coach Wayne Bennett on the weekend.

After Friday night’s 36-16 win over Manly, Bennett retold the conversation the duo had before Marshall joined the club and said he was eager to “go out on a good note”. However, Marshall isn’t holding himself to that.

“Everyone is retiring me, except me,” Marshall said. “I honestly feel like if I wanted to play next year I could, for sure. I still have life in the legs and a bit of hunger in the heart.”

Marshall said whether he wins the grand final or not, it won’t make a difference to his decision. If he does decide to play on, he hopes it will be at Souths.

Marshall was poised to retire last year after the Wests Tigers said he was free to look elsewhere, with the NRL legend saying he will forever be grateful for the Rabbitohs for giving him another year in the game. 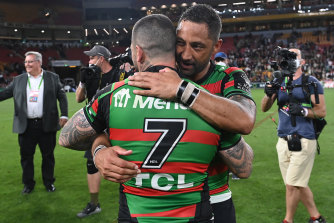 He also said the club has above else, made him feel valued once again – something he had been missing towards the end of his time at the Tigers.

“They make me feel very valued here and throughout my career when I’ve felt like that I can play better and I can feel like I can commit better,” he said.

Marshall said that despite the less than ideal ending with the Tigers, he holds no grudges.

“Obviously at the end of the year when they told me I was free to go, of course [I felt undervalued] but that’s just a natural feeling when you’ve been somewhere and they tell you they are not going to sign you,” he said.

“I’m pretty good at switching over and cutting off what happened. Rugby league has become so much of a business and when you can process that and understands it and move on from it, it hurts less.”

With Adam Reynolds under an injury cloud the past week, Marshall has been readying to take the skipper’s place in the grand final in the event he is unable to play.

Despite the injury, Reynolds declared he wouldn’t miss the grand final “for the world” on Monday.

Marshall said while the chance of Reynolds missing the game is low, he would be ready if called upon.

“I am always ready,” he said about taking the spot in halfback. “I’ve done it all year. That’s what they signed me for, to do Reynos training when he plays. Nothing changes, my job is to play as if I had to be there.”