‘Extra incentive’: Eagles welcome back stars ahead of Collingwood clash

West Coast will have "extra incentive to win" against Collingwood in this week's elimination final after health officials advised the Eagles they'd have to quarantine in their homes for another 14 days if they lose.

Eagles coach Adam Simpson on Monday revealed details given to them by WA health officials, that they would need to isolate after Saturday night's match whether they win or lose.

If they beat Collingwood, the Eagles would go back into home quarantine before travelling to either Queensland or Adelaide, depending on who loses the first qualifying final between Port Adelaide and Geelong. 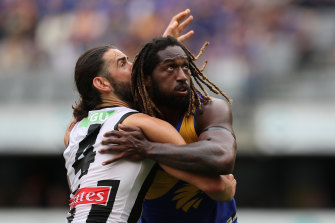 But Simpson and his playing group were told that isolation would also be required if the Magpies eliminate them from the finals series.

"We're in two weeks quarantine now, I think Collingwood are in a seven-day quarantine so I think they'll be considered a dirty club when we play them," Simpson told 3AW, referring to the Magpies' shorter quarantine period.

"So if we lose, we'll go back into quarantine for another two weeks on top of that. I've told our leaders, so I think that might be an extra incentive to win.

"If we have a win, we'll go back into quarantine until we travel and then away we go again. But unfortunately it will be a 28-day stint in quarantine if we don't roll the Pies."

West Coast staff and players have been quarantining at their own homes since their round 18 win over North Melbourne at Metricon Stadium; a game they tried to have moved to Optus Stadium to avoid more quarantine.

The club was visited by WA Police on Monday, to check they were adhering to strict protocols when visiting the club to train.

"The quarantine issue is something we've had to deal with and I can't imagine what it's been like in Victoria doing it for several weeks," Simpson said.

"But quarantining at home for a month is probably like Victoria except when you look out the window you see everyone walking around the streets and going to pubs."

Simpson said the Eagles would have a fairly "full book" to choose from when it came to player availability for Saturday night's clash with Collingwood.

It means that unlike in 2016 when the Eagles were disadvantaged by the pre-finals bye – due to the eventual premiers Western Bulldogs getting players back – Simpson's side is set to benefit significantly from the extra rest this season.

Elliott Yeo is the only one that Simpson has put a line through, with the star midfielder ruled out for the rest of the finals due to ongoing groin issues.