The AFL’s medical substitute rule would be altered to allow teams to inject a fresh player in the final term even if there had not been an injury, under one suggestion raised by a member of the league’s competition committee.

The 21-member committee, chaired by football operations general manager Andrew Dillon, is slated to meet again on November 21, but The Age can reveal there was a suggestion for change at the panel’s last meeting on August 25 in how the medical substitute is employed. 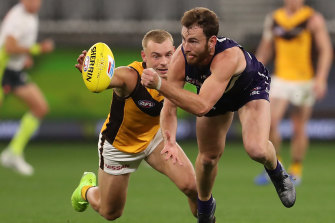 Connor Blakely in action against the Hawks. He was a frequent medi sub in 2021.Credit:Getty Images

As it stands, team doctors have to rule a player out for the remainder of the game for the player to be substituted, but league sources have confirmed one alternative suggestion raised was that coaches should be allowed to use the spare 23rd player should he have sat through the opening three quarters.

That would mean substituting a fit player and running the risk of having an injury or concussion in the final term and not being able to replace the hurt player. However, it was argued that if that was to occur, having one less player on the bench for only the final term was not necessarily seen as a significant disadvantage in terms of rotations.

The ability to use the 23rd player in the final term could also offset any perceived advantage the rival team had if its medical substitute had been activated in the third term, providing fresh legs.

There were 197 listed substitute players through the home-and-away season who did not take to the field. This would almost certainly be slashed if the suggestion — and it’s only an idea at this point — was introduced. It would also potentially ease the need for an unused player to have to make up for missing a game with an extra running session, which also requires a coach to be in attendance, adding to already heavy coaching workloads.

Reintroduced just one day before the 2021 home-and-away season started with a focus on allowing teams to replace a concussed teammate, there had been concerns coaches could exploit the injury ruling simply to inject fresh legs. The injury had to be considered serious enough to keep a player out for at least 12 days but the player could return the following week if fit.

And 28 times this season, the player taken off returned the following week. That did not include concussed players, who are put in a 12-day protocol and miss at least one match. Leading neurologists believe the concussion protocol should be for 30 days, an area of the game now monitored by the league’s new chief medical officer, Dr Michael Makdissi.

That players add to their career tally even if they sit all game on the pine was a point of debate among supporters and the media. Melbourne’s James Jordon, for instance, did not take to the field in the grand final but is still considered a premiership player. 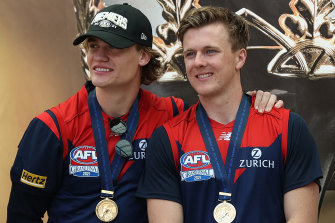 The medical substitute issue is expected to again be raised next month but the agenda for the meeting has yet to be finalised.

The new standing-the-mark rule was also a point of debate through the season and is likely to be a point of discussion next month. It was seen as a way to help open up play through the corridor and increase scoring because it did not allow the man on the mark to close the angle of the kick if taken at half-back or on the wing.

Port Adelaide premiership player Kane Cornes, now a commentator, has been a vocal critic of the rule. He has argued it turned the match briefly into an 18-on-17-player contest, had everyone tired of hearing umpires yell “stand” and did nothing to improve scoring. The average score this year was 79.7, compared with 75.8 in shortened quarters last season, and, perhaps worryingly, 80.2 in 2019.

As the season unfolded, it also became clear coaches had instructed their players to not even man the mark, depending on where the ball was.

The holding-the-ball interpretation is another issue industry figures would like discussed.

Senior coaches Damien Hardwick, Brett Ratten (after his side won only three free kicks from 86 tackles against Geelong) and Chris Fagan, and Port Adelaide veteran player Travis Boak were among those through the season who said prior opportunity was causing too much confusion and suggested it be scrapped.

Fagan, who is a competition committee member, said in May that players who did not handball or kick the ball after they were tackled should be immediately penalised. Hardwick said scrapping prior opportunity, forcing players to even tap the ball forward, would also probably ease congestion.

Amid fears the tackler was too often being rewarded, there was another flashpoint when an umpire paid a free kick to Brisbane’s Jarryd Lyons against Essendon’s Andrew McGrath when the emerging Bomber was contesting the ball. This led to league greats Leigh Matthews and David Parkin being critical of the philosophical change in interpretation.

The competition committee also has fixturing, game analysis and the industry workforce model, the latter attempting to help keep costs under control, as part of its remit.