Cameron Munster wants to remind Jarome Luai that’s he’s not going to be in Kansas anymore when he runs out in front of a hostile State of Origin crowd to make his NSW debut on Wednesday night.

The Panthers five-eighth has been a breath of fresh air for the NRL, joining Nathan Cleary at the heart of a youthful Panthers squad that has six representatives in the Blues alone, as well as Kurt Capewell for the Maroons. 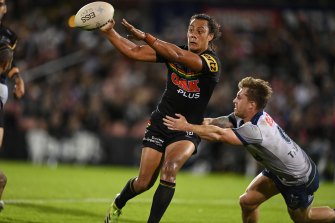 He’s played with freedom and impulse in a side that has dominated opponents for most of last year and all of this year. But the NRL isn’t Origin, as more than a few Blues halves have discovered over the years, while Munster already knows he can not only survive but thrive at the next level.

The Maroons playmaker has beaten a foot injury to line up for Queensland. It looked as if it would be another injury-watch heading towards the match but Munster trained on Thursday and said Friday: “I’ll be honest … even if it wasn’t good I’d be playing regardless.”

Now he has set his sights on resuming the kind of dominant form that saw him win the Wally Lewis Medal for player of the series in 2020, despite missing the majority of game two with a head inury. Part of that would be ensuring he outplays his opposite number.

“He’s a good player, playing some outstanding footy. Kudos to him and the Panthers. Congratulations to him making his debut. I’m sure he’ll go there with a lot of confidence and play the game he knows he can play,” Munster said. 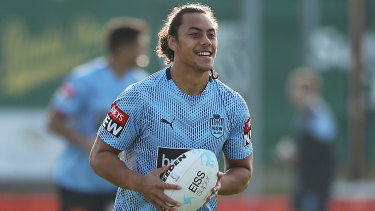 “We just have to nullify his time and space. That’s all you can do sometimes. You can go out and say all the things you want to do but actions speak louder than words.

“We need to make sure we go out there and make him realise how hard the Origin arena is.”

Luai will have the calming influence of Cleary to help but the speed and pressure of Origin football isn’t suited to everyone’s game. Rabbitohs playmaker Cody Walker wasn’t able to put his mark on the arena when he was given his chances and the inexperienced Luai can be guaranteed of a warm reception on and off the park.

This will be Origin number 10 for Munster and the 26-year-old has rarely made a misstep for his state. His performance in game three last year, just a month after helping the Storm win a grand final, was staggering and he never doubts his intuition in key moments.

He insists he doesn’t play the game for the awards but they tend to flow regardless. And none of the Maroons can forget the moment when they held the Shield aloft at Suncorp Stadium after being ridiculed as a sub-standard outfit since the sides were selected.

“It was a crazy moment, I won’t lie. I’d play a shit game and if we won the series, I’d be a very happy man,” Munster said.

“I don’t go out to try and get accolades from anyone at all. I’ll be doing everything I can to make sure we have that same feeling from last year.

“I’ve been very fortunate with the players around me. I’ve been hanging around the Big Three (Smith, Slater, Cronk) for five or six years, I’ve been very lucky to be n that environment. I can’t say I’m made for big games but I back my ability and back what I’ve done during the week.”