Brad Fittler will break with protocol and phone NRL referees’ boss Jared Maxwell before the State of Origin series opener after claiming officiating took a “small step backwards” with “pedantic” penalties during a shortened club round.

The NSW coach, who has never felt compelled to speak to NRL officials about officiating before an Origin match, confirmed he will clear the air with Maxwell after a weekend blighted by players staging to win soft penalties. 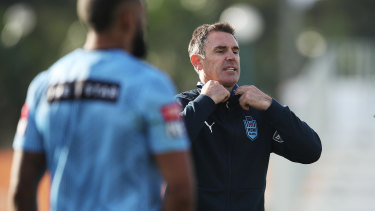 The Blues are already without Roosters duo Victor Radley and Angus Crichton for game one after both were suspended, joining Queensland’s forward leader Josh Papalii on the sidelines.

While critics called out the Tigers’ Daine Laurie and Gold Coast’s Tyrone Peachey for staying down to earn high shot penalties over the course of the weekend, Fittler wanted to distance himself from the milking debate.

“I feel like the integrity of not diving will benefit over a whole season, but if there’s a minute to go and someone gets hit in the head and you need a goal to get in front, I might be thinking ‘[we need the penalty]’,” he said.

“They’re all different circumstances, but if I was a club team I would really encourage us to play footy, be tough and show resilience. I will say all circumstances are different and it’s hard to pre determine what should happen.”

I thought it was a bit pedantic [on Friday night]. I don’t care what they do as long as they’re fair

Several NSW players have aired their frustration at their NRL peers staying down after tackles and waiting for intervention from the bunker, which is being used more frequently to adjudicate on foul play.

But despite fears game one could result in multiple players being sent to the sin-bin, the NRL insists it is confident the showpiece of the rugby league calendar won’t be plagued by indiscretions.

“When you’ve got the best 34 players in the country on the field, you’d expect them to be able to comply,” NRL head of football Graham Annesley said. “We don’t want the game to be affected by players off the field, but ultimately it’s in the hands of the players.”

Fittler spent another large part of the Blues’ training session at Sydney Olympic Park on Sunday running short-sided games where defenders were asked to stop an attacking team with a numerical advantage.

He has said in the lead-up to this year’s series sin-binnings would be “inevitable” given the NRL’s strict enforcement of the rules around high contact.